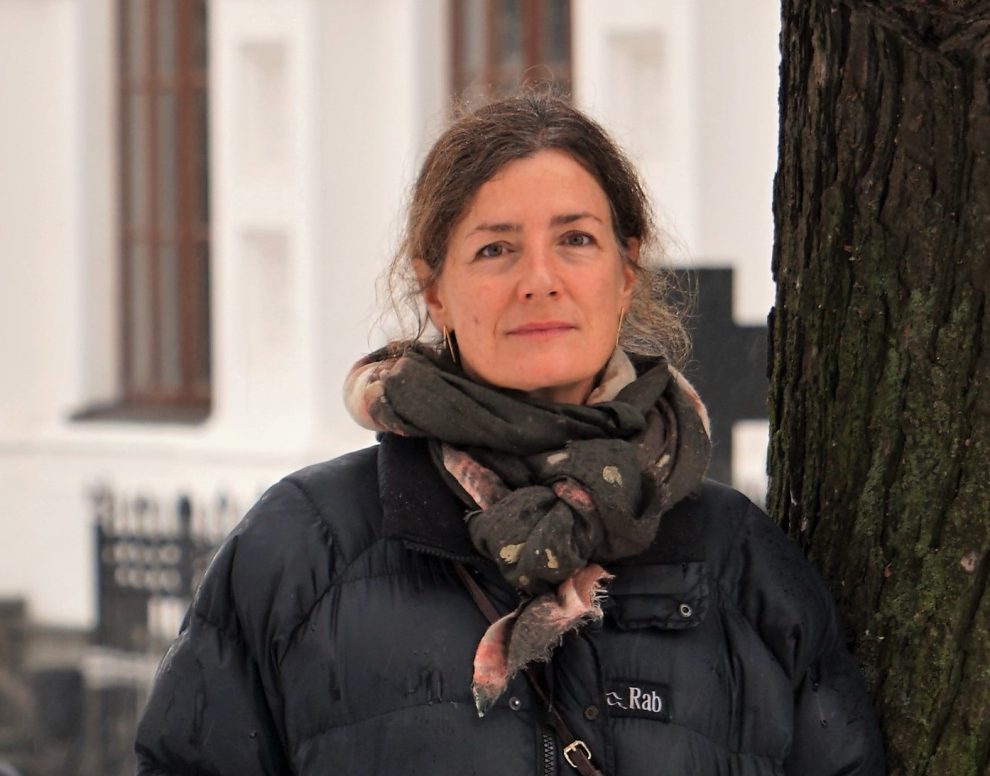 The day after Rachel’s trip to the white goods shop someone hammers loudly on the front door of the flat. Rachel has convinced herself that the washing machine was a ruse, and she wishes she hadn’t divulged her address. You fool, she thinks, grimly, as she puts her eye to the spyhole. She’ll have to pretend she’s gone out.

Instead she recognises the boy from upstairs. He is with the old woman again, and this time he shouts.

‘Dezhornaya is here!’ he announces. ‘Open door. It is condition of lease!’

Rachel hesitates, then pushes down on the handle. ‘Yes?’ she asks, hoping she sounds annoyed.

The caretaker is standing on the doormat with two bulky string bags in her hands. The boy is behind her, clutching a bucketful of old newspapers. He is wearing the nylon anorak that is too small for him, and a pair of plastic trainers.

‘Dezhornaya,’ he repeats. ‘Elena Vasilyevna. She come to do windows.’

Elena. This is the name of the midwife in Jurassic Park, the one who leaves the nursery window open on page twenty-seven. Her mistake allows the baby raptors to climb in. Rachel frowns as she tries to re-focus. There’d been that note on the doormat. It said ‘Close windows!’ in blue writing.

‘Doesn’t she speak any English?’ she asks.

‘Wait!’ says Rachel, panicking. She’s not sure which is worse, being alone with the caretaker or inviting the boy to stay too. ‘What if I can’t understand her?’

The boy stares for a moment, then steps into the flat, brushing past Rachel. Elena Vasilyevna follows. He opens the living room door and marches straight across to the window that looks out onto the balcony, pushing away the sofa that Rachel still heaves in front of it whenever Lucas goes to work.

‘She will do here and here,’ he says, pointing. ‘All rooms. Leave for spring.’ He looks around at the bookshelves and the furniture, sees a pack of Lucas’s chewing gum on the side table and picks it up. ‘I take?’

‘Yes, thank you, please go,’ says Rachel, quite clear now that she does not want this boy in her flat.

Rachel’s palms are sweating. When she shuts the front door behind him, the caretaker Elena is already shuffling down the hallway towards the kitchen. By the time Rachel has secured the lock and caught up with her, the newspapers are on the table and Elena is emptying a kilogram bag of rough brown flour into the bucket which is sitting in the sink.

‘Pazhalsta…’ begins Rachel, wanting to ask her how long it will take and why she needs flour, but Elena turns and holds out a green overall she has brought with her. She waggles her fingers, motioning Rachel to put it on. Then she opens a kitchen cupboard, rummages until she finds a suitable saucepan and passes this, too, to Rachel.

Rachel’s job, it seems, is to sit on the red chair in the living room and tear sheets of newspaper into rectangles the size of a small matchbox. The first pieces are too small, so Elena takes the newspaper from her with a tutting noise and demonstrates the desired proportions. The rectangles go into the saucepan, while Elena turns her attention to her bucket of flour and water. She mixes it with immense concentration, testing it on her tongue and squeezing it between her fingers before pressing the mixture into the gaps between the window and its frame. As soon as she finishes one side, she wipes her hands on her pinafore and begins to layer the newspaper pieces neatly over the paste to create a seal.

Rachel finds the work strangely calming, despite the presence of the old woman in the apartment. Ivan chews on a bread ring in his bouncy chair, perfectly content, as long as she rocks him regularly. There is no need to speak. The television news hums softly from the set in the corner: pictures of a forest somewhere in the Balkans, two truckloads of skinny soldiers. She notices that when the old woman frowns her twisting black eyebrow hairs tangle above her nose. Her misshapen hands shake a little as she works, but there is no point in signalling for her to stop. Elena, she can tell, will complete this task, even to her last breath. If Rachel were to try to prevent her, she would never have the courage to cross the foyer downstairs again, so she doesn’t intervene when Elena moves across to the balcony door and seals that up, too. Rachel doesn’t care what Lucas will say. He promised to stop smoking and he hasn’t. She jogs the bouncy chair with her foot and leans forward to smile down at her son.

‘Smatri!’ says Elena, loudly. She is pointing at the television. ‘Simplemente Maria.’

‘Simplemente Maria!’ Elena moves over to the television and mimes the action of turning up the volume with sharp flicks of her wrist.

‘Oh.’ Rachel rises to her feet and does as she is instructed. She’s noticed Simplemente Maria before, bemused by the Russian dubbing of what appears to be a Mexican soap from the early eighties. The station airs it at least three times a day, in between the aerobics workouts with young women in uncomfortably tiny leotards, so perhaps it is popular: after all, it isn’t hard to follow. Maria the maid gets seduced by the polo player.His shirt is very white against the straw. His long black boots stay on. She still gets pregnant, though. They always show the birth in the closing credits.

This time, however, the plot seems quite complicated; it involves a young girl who is either Maria’s child or Maria as a child or the child of her employers. In the next scene Maria seems older, still with long raven plaits. She is dispensing sugary churros as the cameras linger on her tear-filled eyes and brave half-smile.

As the episode unfolds, Rachel looks over at Elena. The caretaker has finished working at the window and is now leaning against the wall. She has pushed her hands deep into the front pockets of her overall, as if cradling her belly. Her face bears the same expression of deep concentration she wore as she tasted the flour paste: narrow lips pushed out, eyes flicking from one character to another. Rachel turns her attention back to the screen, curious about what so enthrals her. Soon she herself is equally absorbed, puzzling over whether Maria has been penetrated by the family patriarch as well as his playboy son.

When the doorbell rings, both women jump.

Elena straightens up, muttering, disconcerted perhaps to be caught so far from her cubicle downstairs. Rachel responds more slowly. Maybe it is Zoya, who will most likely sneer at both the nature of the drama unfolding on the television and Rachel’s latitude with the caretaker. She crosses to the front door and puts her eye to the spyhole. Something is blocking the light. Then the view clears and she pulls her head back sharply.

The little fish-eye lens has shown her the face of a madman.

‘Shto? Steeralnaya mashina?’ She glares at Rachel suspiciously, then takes hold of the little stool that sits by the phone and hauls it over to the door so that she, too, can peer through the spyhole. A stream of Russian invective ensues, mainly from Elena, with one or two muffled words from the madman. The caretaker keeps glancing over her shoulder with a look of increasing fury until Rachel understands that it isn’t the madman she is appalled by so much as Rachel’s own ineptitude in causing him to appear. Then Elena climbs down from the stool with a huffing noise and begins working both locks with fingers like gristly chicken bones.

‘Don’t!’ implores Rachel. It is too late. The door is open and the madman isn’t a madman at all, but a man with a horribly damaged eye, the eyelid so bruised and swollen she cannot see his eyeball. Next to him sits a huge cardboard box that reaches up to his waist. She sees the picture before she forms the words. A square with a circle inside it. A washing machine.

Mykola. Rachel recognises that name, but before her emotions have time to rearrange themselves, the man shrieks and puts his hand up to his face.

Elena has spat at his black eye.

Excerpted with permission from Snegurochka, Judith Heneghan, Salt Publishing. Read more about the book here and buy it here.

Join The Dispatch Whatsapp Group to stay updated
The Dispatch is present across a number of social media platforms. Subscribe to our YouTube channel for exciting videos; join us on Facebook, Intagram and Twitter for quick updates and discussions. We are also available on the Telegram. Follow us on Pinterest for thousands of pictures and graphics. We care to respond to text messages on WhatsApp at 8082480136 [No calls accepted]. To contribute an article or pitch a story idea, write to us at [email protected] |Click to know more about The Dispatch, our standards and policies
TagsContemporary Fiction Judith Heneghan Salt Publishing Snegurochka