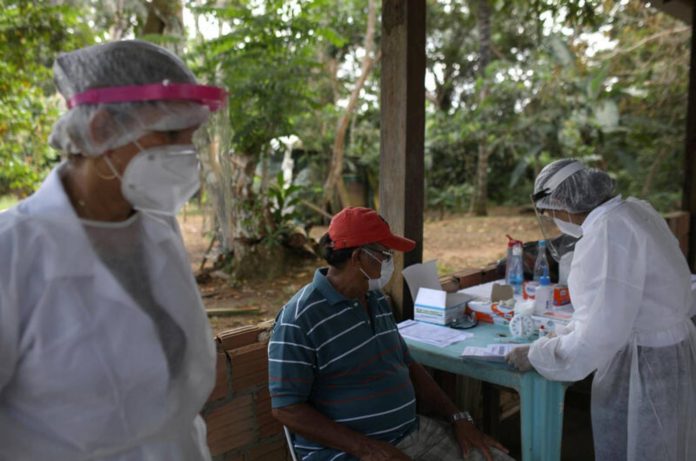 BARCELONA: People living in the world’s tropical forest regions, from Brazil to Indonesia, face heightened risk to their health this year from a potentially deadly combination of forest fires and the COVID-19 pandemic, scientists warned on Wednesday.

Air pollution caused by smoke from annual human-caused fires that rage in tropical regions is expected to make cases of the novel coronavirus more severe, they said.

Eminent U.S. physician Harvey Fineberg, president of the Gordon and Betty Moore Foundation, warned that the 2020 fire seasons in tropical forest countries “are very likely to exacerbate the presence and severity of the COVID-19 pandemic”.

“It’s a year when it is incumbent especially on the leadership, and those who have influence, to do everything in their power to curtail the intentionally set fires,” he said in a briefing organised by The Earth Institute at Columbia University.

He called the fires an annual “blight” but predicted this year they would be “especially damaging not only to the ecology but to human health”.

In the Brazilian Amazon, the main fire season runs from August to October. Its intensity last year hit global headlines and sparked calls for better prevention.

In Indonesia, the dry season runs from April to October.

But the coronavirus pandemic is likely to distract political attention from the problem, and could eat into resources to train firefighters and get them into peatland forests where some of the most serious fires smoulder for a long time, she added.

Fineberg said it was too early to point to examples where forest fires have worsened the severity of COVID-19, as the main fire season is only beginning.

But evidence on general air pollution and lung infections caused by the virus so far show a “chain of connection”, he noted.

He also warned of a heightened risk of the COVID-19 infection spreading if fires force communities to evacuate and seek shelter in shared accommodation.

Marcia Castro, chair of global health and population at the Harvard T.H. Chan School of Public Health and an expert on the Brazilian Amazon, said forest fires in the region commonly led to a rise in hospitalisations because of respiratory, heart and other problems.

If that were to happen this year, on top of the strain from the COVID-19 pandemic – Brazil currently has the world’s second-highest number of cases and deaths – the health system would not have enough beds to cope, she said.

She and Fineberg highlighted the particular threat to indigenous peoples living in or near forests, noting COVID-19 was being brought into their areas by outsiders exploiting their land through mining and other activities that damage the environment.

Seasonal surges in dengue and malaria patients were also likely to complicate the situation, Castro said, with 90% of hospital beds already occupied in several cities in the Amazon region, mainly due to COVID-19.

As Brazilian cities relax lockdown measures with inadequate precautions to prevent the disease’s spread, “an intense fire season could have devastating public health consequences with the unnecessary loss of many lives and the widening of local inequalities”, she said.

“There is really no option (other) than preventing these fires from happening,” she added.

The scientists emphasised that forest fires in the world’s humid tropics have rarely occurred naturally, unlike in other drier areas such as the United States and Australia.

Ane Alencar, director of science at the Amazon Environmental Research Institute (IPAM), said fires in the Amazon were usually used to clear land, particularly for farming, meaning they could be controlled using policy.

In 2019, deforestation in Brazil’s Amazon rose by 34% and is likely to increase by a similar amount this year, she added.

In May, deforestation was up for a 13th consecutive month, government data showed last week, despite President Jair Bolsonaro’s recent deployment of the military to fight soaring environmental destruction in the region.

Alencar said that about 45% of the land that had been deforested last year had yet to be cleared by burning, pointing to the potential for another year of intense fires.

“We need to have the government really on board to fight illegal activities… and while we don’t have that, you have a major disaster in the Amazon – an environmental crisis on top of a sanitary crisis,” she said.

Alencar and Castro called for businesses and consumers around the world who buy commodities from Brazilian industries that contribute to deforestation – such as beef, leather and soy – to use their purchasing power to persuade Brazil to clamp down.

“With the current administration, I think we (would) need a lot of pressure that would harm in some way the economy for them to take action,” Castro said.

Jammu & Kashmir Megan Rowling | Thomson Reuters Foundation - September 24, 2020
Srinagar: A CRPF officer was killed in an attack by militants in Budgam district of Jammu and Kashmir on Thursday, police said.

Newsfeed Megan Rowling | Thomson Reuters Foundation - September 24, 2020
Srinagar: Security forces are alert to Pakistani efforts of dropping consignments of weapons and narcotics into Jammu and Kashmir along the border...