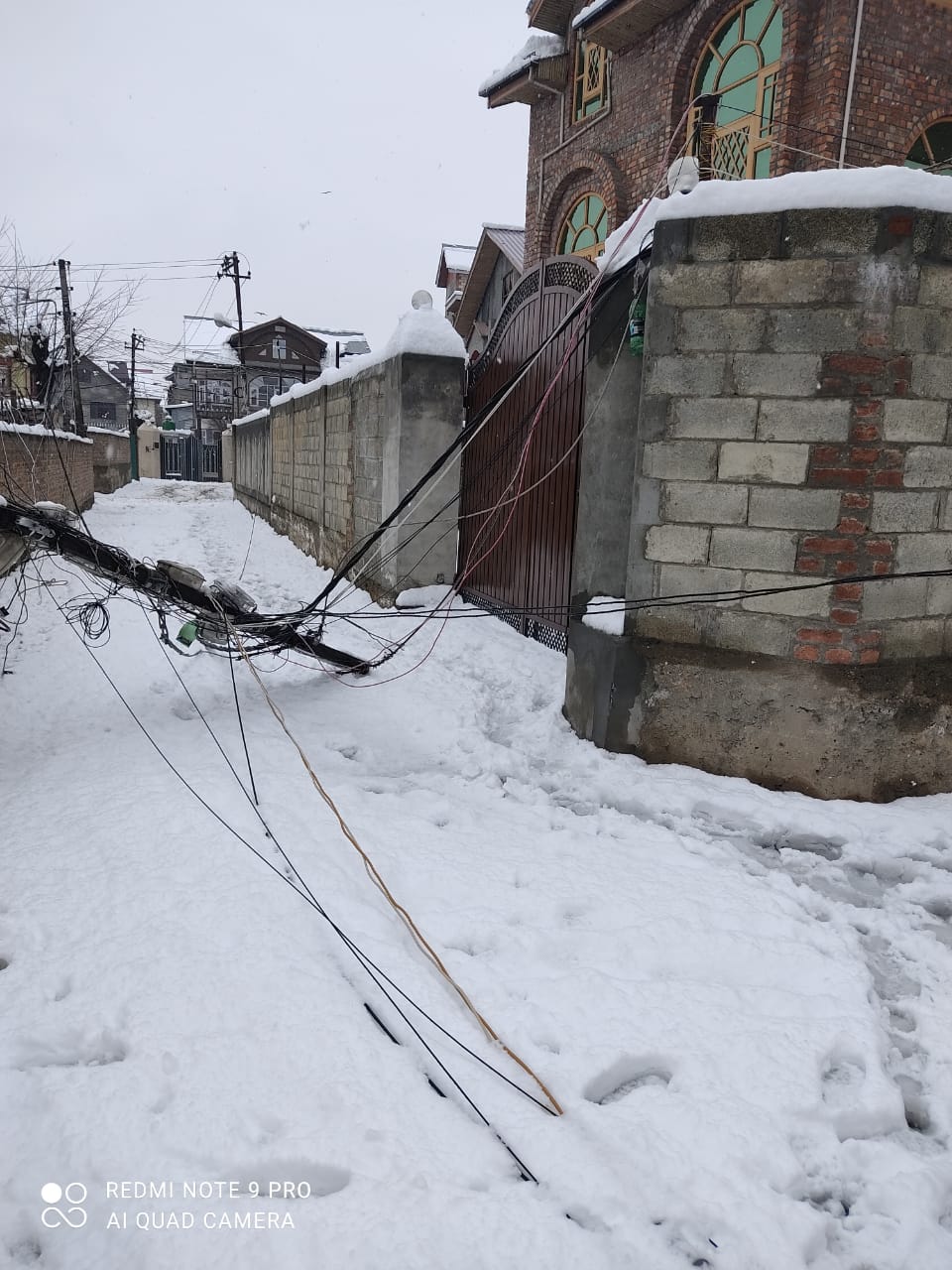 SRINAGAR: Even after the passage of seven decades, Kashmir’s power infrastructure continues to remain far behind compared to other parts of the country as seen on Wednesday.

The night-long spell of heavy snowfall did not only result in power breakdown in the entire Valley but took the lid-off of the Power department’s tall claims of improving power infrastructure as in majority of Srinagar area’s high tension and low tension (HT&LT) lines were seen hanging, almost touching the ground.

Locals of Srinagar said  that at many places in old Srinagar the Power department hasn’t even replaced the wooden electric poles which poses a great risk on normal days let alone during snowfall. “Thank god, there is no electricity, otherwise, this junction would lead to accidents in our area,” said Lateef Ahmed, a resident of Rajouri Kadal area of old Srinagar.

He said that Power department makes tall claims about improving power infrastructure but on ground nothing concrete has been done. “The government claims that smart metering is must to prevent theft, but how can smart meters help when just a night-long snowfall plunges entire Kashmir into darkness,” said Gowhar Bhat, a resident of Fateh Kadal area of Srinagar.

He said that his father and grandfather has been telling him about erratic power supplies in Kashmir during winters. “What has changed, I believe nothing. Look at the way wires are hanging at the main transformer,” he said. “We oppose the installation of smart meters only because we are not getting proper electricity. Night-long snowfall collapsed entire power department. Srinagar, the capital city is having no power supply despite claims made by power department. A few inches of snow turned entire power infrastructure upside down across Kashmir.”

A group of women in Nawabazar area of Srinagar said that power has been the first causality in Kashmir whenever snowfalls here. “Why the government doesn’t lay underground cables inside of keeping the HT/LT lines hanging. These lines pose a great risk to life and property as due to snow accumulation on them, they are touching rooftops, shops and even main road some places,” they said, adding that at some places HT lines have fallen on ground.

In congested areas of Srinagar that include Gonikhan, Maharajabazar, Hari Singh High Street, Sarai Bala, Barbarshah, Habba Kadal, Kani Kadal, Shaheed Gunj, Nowhatta, Bohri Kadal, Hawal, Zadibal and other areas, locals said that there is haphazard wiring of HTs and LTs while transformers are just three feet above the ground. “Power infrastructure should have been first priority.

Can the Power department tell us what has changed in past 70 years,” asked an elderly Haji Ghulam Qadir Rather, of Bohri Kadal area of city.

While Srinagar district along with the majority of areas across Kashmir reeled under darkness in the wake of heavy overnight snowfall, Zafran Colony area of Pantha Chowk also suffered as main tower at Balhama got damaged due to the snow accumulation. Many residents, however, questioned the power department’s ill-planning stating that the Balhama receiving station was recently inaugurated and how come the newly installed tower collapsed. “Wasn’t it properly installed,” a resident asked. “It fell on two vehicles and damaged both. Why there is no check at the time of installation as to whether these towers can bear the snow impact.”

Majority of Srinagar residents told that smart metering can wait and power department should focus on laying underground power lines to avoid huge damages caused to it after every snowfall.

“In a place, where snowfall is a regular feature of every winter, underground power lines can help save power department millions of rupees, which otherwise are spent on repairing damaged grid stations, power lines, transformers etc every winter,” they said.

Managing Director Kashmir Power Development Corporation Limited (KPDCL) Dr Basharat Qayoom said that it is not proposed as of now to go for underground wiring of all transmission lines in Kashmir. “But yes, wherever it is feasible, we will definitely propose underground wiring. Our primary focus remains vulnerable areas first,” he said—(KNO)