The rented car moved smoothly upwards through Arizona as Anya delighted in the scenery of snow-peaked mountains and vegetal diversity: desert plants, including various types of cactus and stubby hedges, grasslands, coniferous trees and cold deserts. After flying from Los Angeles to Phoenix, Anya and Alex had rented a car to drive to and spend a weekend in a lodge overlooking the Grand Canyon, an immense erosional trench carved out over millions of years by the Colorado River as it ploughed through the plateau. It was their second holiday in three years.

They reached the South Rim of the Grand Canyon, at an average elevation of 6,800 feet, and followed the well-defined maps to locate the Grand Canyon National Park situated in a scenic area of the Grand Canyon Village and known for its beautiful sunrises and sunsets. Anya was glad that they had both carried their trench coats, gloves and hoods to brazen the cold as they were chilled to the bone by an ambient temperature of minus 3 degrees Celsius and fiercely cold winds during their short excursion to the washroom at the Grand Canyon Visitor Centre.

Gladly returning to the warmth of the car, they drove to their lodge, a five-minute drive from the Visitor Centre and ideally located for accessing strategic viewpoints and hiking trails. On parking the rented car and handing over their booking details and ID cards to the person at the reception, they were asked to wait for 30 minutes while their cabin was readied. Anya ran out of the naturally rustic lodge with modern amenities to the railed wooden platform, meant to provide visitors free scenic views of the canyon.

The spectacular vista of the precipitous gigantic rocks overwhelmed her into silence. Alex joined her outside, and they both donned their coats, gloves and skull caps as the frosty wind cut into them sharply while they looked out over the vast cavern.

“Wow! It’s such an amazing view!”
“Nothing manmade equals this marvel of nature,” agreed Alex, never failing to be overwhelmed by the sight though this was his third visit.
“It’s such an immense formation and to imagine it was carved out by geological forces!”
“Be careful of the ice. It’s slippery,” warned Alex as Anya ventured to the railing that edged the wooden platform while he took out a duffel bag and reassembled his high-resolution camera, glad to shield his eyes from her trusting gaze.

Awed visitors milled around them on the platform, and a teenager requested Alex to click a photograph of her with her beau. She returned the favour to take a shot of them with the vertical rock formations behind them. It showed a tall and well- built specimen of American masculinity with a diminutive wisp of a girl of undoubtable Indian origin who reached the waist of her companion.

Alex tried to capture the breathtaking views in his lens, reflecting on the difficulty of the task that confronted him. It was ironic to see her so happy, her pixy face reflecting an innocence and zest for life, unaware of the impending bolt from the blue. He had planned the two-day trip to ostensibly commemorate their third wedding anniversary but in actuality to make a revelation that would break her heart and dispel her unquestioning trust in him. What kind of monster was he to have taken the decision he had! But, on the other hand, what else could he do?
Alex and Anya had met seven years before during her exploratory visit to his university to meet a lecturer. She was writing a thesis for her PhD degree on Comparative Literature from University of California, Los Angeles (UCLA) and wanted to interview Keith Wilson, a prominent American author who taught in Los Angeles Community College. Alex, who conducted aerobic classes in Community College, had guided her to Keith and, taken up by her delicate Oriental looks, also asked her out for coffee. That initial meeting had led to a friendship that transcended national and cultural barriers.
Acquaintances spoke about the incongruity of a robust body-builder and exercise freak pairing up with a petite academic, but it did nothing to dent their claim that opposites attract. After a whirlwind courtship during which his Los Angeles upbringing had welded with her Mumbai environment and they had become familiar with each other’s parents, Alex had proposed and Anya had joyfully accepted.
Alex turned around from capturing the views and strode towards Anya to hold out a cautionary hand as she teetered on the icy edge of the platform. They returned inside the lodge and strolled about the common areas, pausing to check out shops and restaurants.

“Alex, can we have lunch here after we settle in?” Anya asked eagerly, looking at the list of cuisine advertised on a placard outside an in-house Mexican restaurant.

“Sure. It looks good. And there are appetizing vegetarian options.” Alex read out some vegetarian dishes available; he usually opted for vegetarian cuisine since Anna did so. 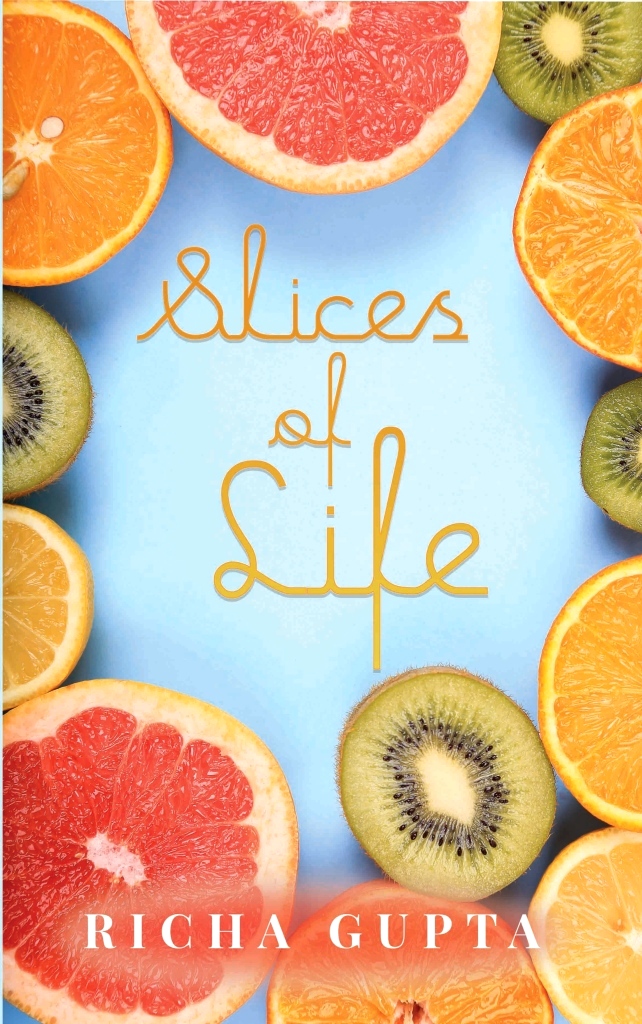 Excerpted with permission from the short story “Disclosure” from Slices of Life, Richa Gupta, Hesten. Read more about the book here and buy it here.

Set in 16th century India, this novel is inspired by the legend of the young sultan of Malwa Baz Bahadur, and Rani Roopmati
"Breath of Gold" narrates the life story of the internationally renowned flautist Hariprasad Chaurasia