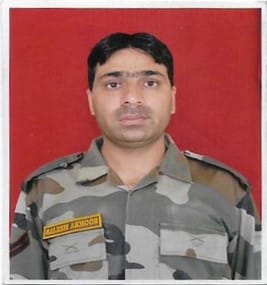 Lashkar men suspected to be behind attack on him, He was threatened in 2019 through audio message: Def Spokesman

The army said that it suspects Lashkar men behind the killing of Saleem, who was on a leave. In a statement to news agency—Kashmir News Observer (KNO), Defence Spokesman said that Muhammad Saleem Akhoon S/o Ghulam Hassan Akhoon a TA soldier, resident of Jablipora, Bijbehara was shot at his residence while he was on leave. “The 43-year soldier by attacked by two militants suspected to be from LeT, at his house. The soldier was rushed to SDH Bijbehara from where he was referred to GMC Srinagar, however he was declared brought in dead at GMC. He had sustained severe head injury,” the statement said.

It said that Saleem is survived by wife, a nine-year-old daughter and a six-year-old son.
“Saleem was a brave and conscientious soldier, who was highly decorated, having been awarded with Chief of Army Staff Commendation Card twice and a Northern Army Commander Commendation Card,” the statement said., adding that in 2019, the soldier had been issued threats by militants via an audio message but had continued to do his duty undeterred. “The nation stands in solidarity with the family of the brave soldier. The perpetrators will be tracked and booked,” the statement added—(KNO)