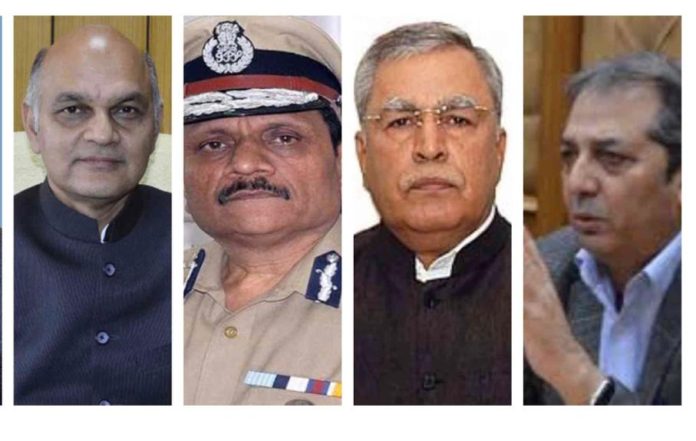 JAMMU: Four advisors to Jammu and Kashmir’s former Lieutenant Governor Girish Chandra Murmu would continue are likely to continue with his successor Manoj Kumar Sinha unless replaced by the Government of India.
Even as there are constitutional rules on appointments and termination of the services of the Advisors to the Lieutenant Governor but experts are of the view that replacement of the incumbent would not impact the advisors appointed by the Ministry of Home Affairs in Jammu and Kashmir Union Territory.
“Their appointing authority is the Ministry of Home Affairs. It is clearly written in the orders issued by MHA that they are advisors to J&K’s LG and not as advisors to GC Murmu. So there is no need to issue fresh orders for appointing them as advisors,” an official said.
According to him, the LG of UT had only issued orders relating to their terms and conditions of the appointment.
“The Lt Governor of the Union Territory of Jammu and Kashmir is requested to issue necessary orders with regard to the terms and conditions of his appointment under intimation to this ministry,” reads the orders issued by MHA for appointing advisors, a copy of which is with KNO.
It is worthwhile to mention that retired IPS officer Farooq Khan and IAS officer K K Sharma were retained as advisors after Murmu took over as the first LG of Jammu and Kashmir in 2019.
Former CRPF DG Rajiv Rai Bhatnagar, a 1983-batch officer of the Uttar Pradesh cadre, was appointed as the advisor to the Lt Governor on January 5, 2020.
In March this year, Baseer Khan, an IAS officer, was appointed as advisor to LG to give representation to Kashmir in decision-making.
According to sources, there is no question of any politician being appointed as advisor to LG. “The government cannot handpick any politician and appoint him as advisor,” they said

Newsfeed The Dispatch Staff - September 22, 2020
New Delhi: India on Tuesday rejected Pakistan’s contention that the Kashmir issue is one of the most long-standing disputes at the United...