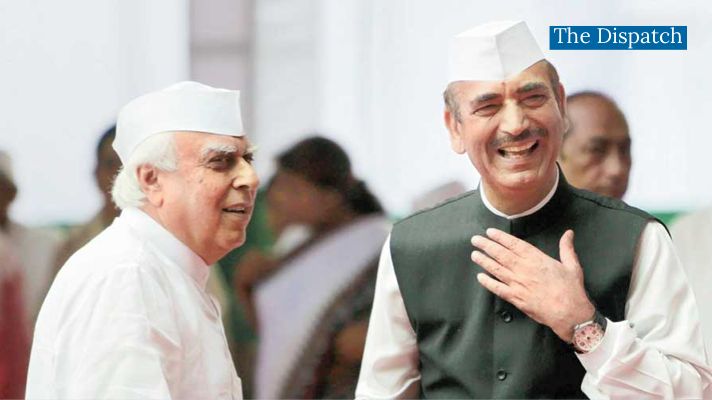 The Dispatch Staff
Add Comment
Kapil Sibal announced his resignation from Congress only after he squared up a deal with the Samajwadi Party for a Rajya Sabha seat.

JAMMU: One of the torchbearers of G-23, the group of Congress leaders who publicly called for complete overhaul in the party -Kapil Sibal today stunned everyone as he positioned himself ‘independent’ for the upcoming Rajya Sabha election.
Twenty-three Congress leaders making the senior-most tier of experienced and veterans had gone public with their criticism of Gandhi family as they asked for complete overhaul in the party. Ghulam Nabi Azad, Kapil Sibal, Anand Sharma are among the top ‘rebels’ who stood up to the Gandhi family.
One of the common features along 80 percent of G-23 leaders is that they have almost all their career span been Rajya Sabha members. Barring six of them, none of the G-23 leaders have an electoral constituency to win a Lok Sabha seat. Veterans like Azad, Sibal and Anand Sharma lost elections to political newbies when the party fielded them to contest in 2014. A Rajya Sabha seat, therefore, is a common feature of weakness for most G-23 leaders.
Sibal announced his resignation from Congress only after he squared up a deal with the Samajwadi Party for a Rajya Sabha seat. He has though positioned himself as independent but Samajwadi Party has pledged him support. Sibal has contested cases for Samajwadi Party veteran Azam Khan who has recently been released on bail.
Meanwhile, political circles are hot with speculations that Ghulam Nabi Azad may secure a Rajya Sabha seat from Rajasthan where Congress is in power.
According to sources, Ghulam Nabi Azad, Rajiv Shukla, or Pawan Khera can likely get Rajya Sabha seats from Rajasthan, whereas either Kumari Shelja, Anand Sharma, or Randeep Singh Surjewala can get into Rajya Sabha from Haryana.
Biennial elections to 57 Rajya Sabha seats from 15 states will be held on June 10. A number of prominent Congress leaders, including Ambika Soni, Kapil Sibal, Jairam Ramesh, will retire from the Upper House of Parliament.
Keeping in mind the results of recently held assembly polls, the United Progressive Alliance (UPA), which is led by Congress, can get upto 13 seats. According to party sources, the Congress can get 8 Rajya Sabha seats, the Dravida Munnetra Kazhagam (DMK) can get 3 seats, and the Shiv Sena and the Nationalist Congress Party (NCP) can get one seat each.
According to party sources, the Congress is hopeful of getting 13 seats with the help of alliance partners.
The states from which Congress can get Rajya Sabha seats includes two seats in Rajasthan, two seats in Chhattisgarh, and one seat each in Haryana, Karnataka, Tamil Nadu, Maharashtra, Jharkhand, Bihar, and Madhya Pradesh