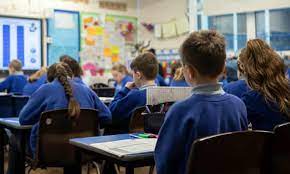 Ramban: Government-run schools in Jammu and Kashmir’s Ramban district are facing an acute shortage of teaching staff as 586 posts of principals, lecturers, headmasters and teachers are vacant out a sanctioned strength of 2,073.

In addition, two school buildings have been declared unsafe, according to official data.

Schools in the district reopened last month after a long break due to the coronavirus-induced lockdown and the winter vacation, and there have been frequent protests by parents and students for adequate teaching staff and better infrastructure.

Ramban Deputy Commissioner Mussarat Islam wrote to the director of education in Jammu early this month over the “virtual collapse” of the education system in the district and suggested sending a team of senior officers for spot assessment.

“There is no doubt that the education system in our district is in a mess and needs urgent measures to safeguard the future of the students,” District Development Councilor Mohammad Shafi Zargar of Rajgarh told PTI.

The district commissioner has also raised the issue of dilapidated condition of certain school buildings after conducting a safety audit of the structures, officials said, adding at least two schools the Government Middle School Hiller, Rajgarh, and the Government Higher Secondary School Rajgarh have been declared unsafe.

On the shortage of teaching staff, the officials said that against a sanctioned strength of 23 principals, 12 posts are vacant. Likewise, there are 269 posts of lecturers, but only 128 are posted in the district.

Against the total strength of 59 headmasters, 25 are performing their duties and 34 posts are vacant, the officials said, adding there are 256 posts of masters and 143 posts of teachers vacant against the sanctioned strength of 437 and 1,285, respectively.