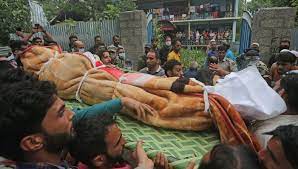 SRINAGAR: The Jammu and Kashmir police has initiated the process of attaching the property of the militant involved in the killing of a Kashmiri Pandit in the Shopian district yesterday.

A top police official said that the militant identified as Adil Ahmad Wani of Kutpora village of Shopian was involved in the killing of Sunil Kumar of Chotigam village of the district. He said that the process of attaching the house of Adil Wani has been initiated and his kin has already been arrested.

Notably, on Tuesday militants shot dead a Kashmiri Pandit identified as Sunil Kumar and injured his brother in their orchard in Chotigam village of Shopian district—(KNO)