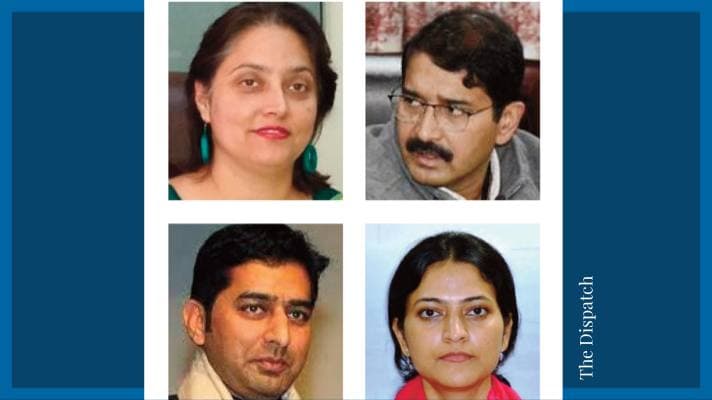 JAMMU: The Jammu and Kashmir Government has ordered promotions of six IAS officers to the next higher grade of the service.

Consequent upon review by the screening committee and approval of the Lieutenant Governor, an order to this effect was issued by the General Administration Department Monday.

According to the order, Sheetal Nanda and Sugwat Biswas, both 2006 batch officers of the IAS have been promoted to the Super Time Scale 0f IAS (level 14 of pay matrix) with effect from January 1, 2022.

Similarly, Sushma Chauhan, Shahid Iqbal Choudhary and Sarmad Hafeez of the 2009 batch have been promoted to the Selection Grade of the IAS (Level 13 of pay matrix), also with effect from January 1, 2022.

Fazl ul Haseeb of 2018 batch has also been promoted to the Senior Times Scale (level 11 of the pay matrix).

All these six officers have been of the original Jammu and Kashmir of the IAS which has now been merged and rechristened as AGMUT (J&K).

Shahid Choudhary is Secretary in the Department of Tribal Affairs, a department that has been turned into major governance and public outreach limelight under his watch over the last ten months. Some path-breaking post-2019 initiatives such as Forests Rights Act have successfully happened with coordination of the Tribal Affairs Department.

Choudhary is also the Chief Executive Officer of the Mission Youth –a specific youth engagement and empowerment agency of the government. The Mission Youth, among other spotlight processes and events, put up a spectacular show of getting together more than 60,000 youths, online and offline, for interactions with Home Minister Amit Shah during his October 2021 visit to Jammu and Kashmir.

Sushma is currently Secretary in the Department of Planning, Development and Monitoring while Sarmad holds the charge of high profile Tourism Department. Haseeb has recently been posted out as Additional Deputy Commissioner, Srinagar.