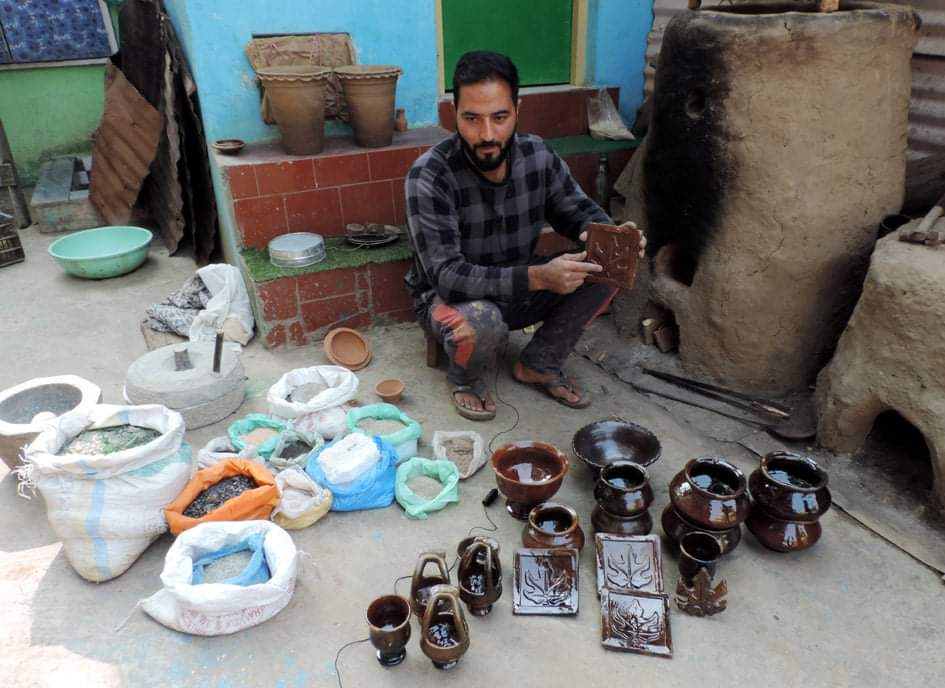 Mohammad Umar Kumar, a resident of Ishber area of Nishat here, has now involved his family in the craft and he also teaches the skill to few youths in a bid to keep it from waning into obscurity.
FacebookTwitterPinterestWhatsApp

Srinagar: A 26-year-old commerce graduate from Srinagar is aiming to revive the age-old but ‘dying’ art of glazed pottery in Kashmir after learning it from an octogenarian, who he claims is the only person alive to know the art.

Mohammad Umar Kumar, a resident of Ishber area of Nishat here, has now involved his family in the craft and he also teaches the skill to few youths in a bid to keep it from waning into obscurity.

Glazed pottery, known as Dal Gate pottery, is unique to Kashmir. Originally, glazed tiles in deep green, blue, brown and ochre were made in the valley. This craft later got bifurcated to tableware and vases made in red, green and blue glazes.

Once famous and sought-after, this art, like many other art forms in Kashmir, is slowly dying as not many from the new generation in the valley are willing to ‘get their hands dirty’.

Kumar’s family has been into pottery for several years now, but he took upon himself to wade into a rather different territory and take up the mantle of reviving the glazed pottery the art form lost to modernisation.

We have been involved in pottery, but I took this art just to revive it. This art was there 70 years ago but it has almost died in Kashmir, Kumar told PTI here.

Only one person knew this art. He is an 80-year-old who lives in Khanyar locality here. I thought this art would die after him. But, I will not allow that. All my family members are helping me. I have told them that even if we run into losses, we will not let the art die, he said, adding, it took him about eight months to learn the ropes.

Kumar manufactures various items, including decorative ones, and prepares the glazed colour himself. He uses waste glass, lead in used battery cells and powdered waste copper metal in his craft.

He said the demand for glazed pottery items was so huge that he was finding it difficult to keep up.

I am the only one in Kashmir who is doing it. I have got offers from Bengaluru who want to market it internationally, but I cannot do it all by myself, he said.

He said the customers are delighted to see the finished products and the feedback has been wonderful.

Customers are surprised to see this art when they visit here. They wonder how this art has come alive once again. I have worked so hard for it. I will do anything to revive this art. Customers send me photos and I can make anything,” he said.

Kumar said a social media post by the popular ‘Kral Koor’ the pottery girl of Kashmir as Saima Shafi is known as, has helped generate a lot of goodwill.

I am getting a lot of positive feedback. Shafi had uploaded a picture on her Instagram account and the post received a lot of positive comments saying that at last someone was trying to revive the art, he said.

In the post, Shafi thanked Kumar for carrying forward the legacy.

She asked Kumar to stay strong and never quit, saying, He will be the backbone of younger generation potters

She also put out a request to the youngsters to take the first step of learning pottery from local potters and that in the coming times, it is going to be a big industry in Kashmir. I promise you won’t regret taking pottery as profession .

Talking about his plan, Kumar said, I want to restore this art to how it was in the yesteryears. We had glazed tiles decorate the outer walls of our houses. I want to make that happen again.

He also teaches the art to seven students at a centre set up by Jammu and Kashmir’s Department of Handicrafts. While he said its director Mehmood Shah has helped him a lot, he believes there should be more support.

The government should support us more. There is a need to revive the age-old arts in Kashmir which have now become extinct. That will help us save our identity and culture. The new generation does not know much about these arts. There is a need to show them those arts. Few more centres need to be opened for teaching purposes, he said.