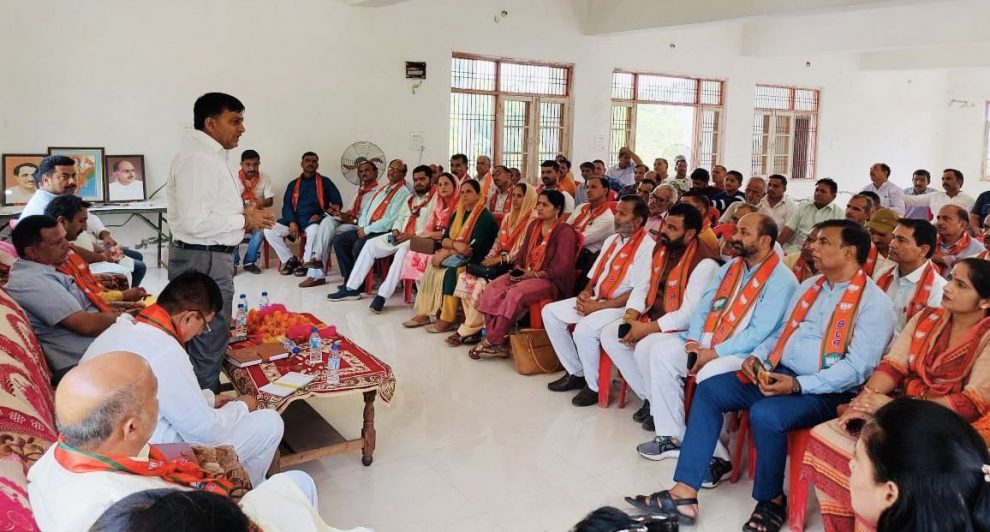 JAMMU: BJP is a party which gathers its strength from the common masses and also which empowers common masses without any discrimination. These remarks were made by BJP J&K General Secretary and former MLC Vibodh Gupta today while addressing a one day Sammelan of Shakti Kendra Pramukhs at Basohli. These  one day Sammelan was specially organised by the party to strengthen the party base in the area and to encourage the Shakti Kendra Pramukhs to further work hard for the nation and for the party.

In his address at the Sammelan, Vibodh said that BJP has huge expectations from the Shakti Kendra Pramukhs and called upon everyone present in the meeting to work hard for ensuring the victory of BJP in the forthcoming elections in J&K. He also stressed on the need for drawing up specific strategies by each Shakti Kendra Pramukh and ensuring building up of a strong team at the ground level. This he said will go a long way in ensuring the overall development of their areas and will also help in making BJP a strong force for the poor and marginalised.

Join 'The Dispatch' on WhatsApp.
While throwing light on various people welfare programmes being implemented by the central Government, under the able leadership of PM Modi, Vibodh said that to ensure that benefits of such programmes should reach to common people, the Shakti Kendra Pramukhs can play a vital role. For this he stressed on the need for remaining vigilant and also to regularly learn about these programmes through various social media platforms of the BJP party.
In his address Jeewan Lal, District President stressed on the need for good booth management which is the only way to win elections and to strengthen the party at ground level. Jangbir Singh Prabhari, called upon the Shakti Kendra Pramukh to regularly keep in touch with the common masses and to ensure that their genuine issues are raised at appropriate platforms. Others who spoke on the occasion included Col. Mahan  Singh, DDC Chairman, State Executive members Neeru Rajput, N D Tripathi, Bikram  Singh, Gopal Krishan, Sushma Jamwal, Reeta Devi, Sushma Devi and Nisha Devi. Besides Shakti Kendra Pramukhs of Basohli, the others who attended the programme included District office bearers, DDC Members, BDC Members, Morcha Pradhans and Mandal Pradhans.
The Dispatch is present across a number of social media platforms. Subscribe to our YouTube channel for exciting videos; join us on Facebook, Intagram and Twitter for quick updates and discussions. We are also available on the Telegram. Follow us on Pinterest for thousands of pictures and graphics. We care to respond to text messages on WhatsApp at 8082480136 [No calls accepted]. To contribute an article or pitch a story idea, write to us at [email protected] |Click to know more about The Dispatch, our standards and policies