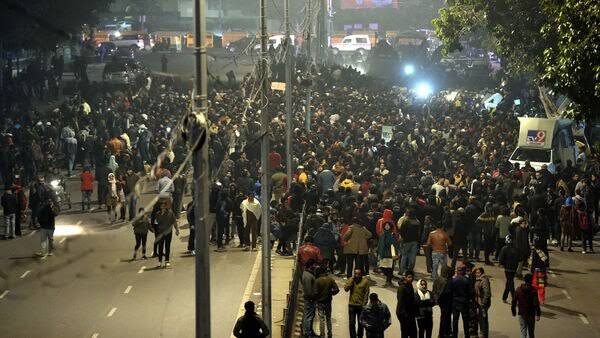 Several policemen including senior police officials were injured in the violence and stone-pelting carried out by the unruly agitators on Sunday, Delhi Police said.”In the violence and stone-pelting by protesters, yesterday, several policemen including South-East District DCP, Additional DCP (South), two Assistant Commissioner of Police (ACP), five Station House Officers (SHO) and inspectors have been injured,” said Delhi Police in a statement. “Among the injured officials, HC Maqsool Ahmad is admitted in ICU with severe head injuries. All 35 detained students at Kalkaji Police Station have been released,” the statement read.

All detained Jamia Millia Islamia University students were on Monday released from Kalkaji and New Friends Colony (NFC) police stations, said Delhi Police. The midnight protests carried out by the students in front of Delhi Police Headquarters was also called off by them.
“All students detained from Kalkaji and New Friends Colony have been released,” said Delhi Police PRO MS Randhawa.
“We have appealed the protesters to end their protest and buses were arranged to drop the students. Injured students will also be released after the treatment said Delhi Police in a statement.
The students of Jamia Millia Islamia and Jawaharlal Nehru University (JNU) had staged a protest at the Police Head Quarters (PHQ) earlier on Sunday after the action by Delhi Police against students at Jamia University.