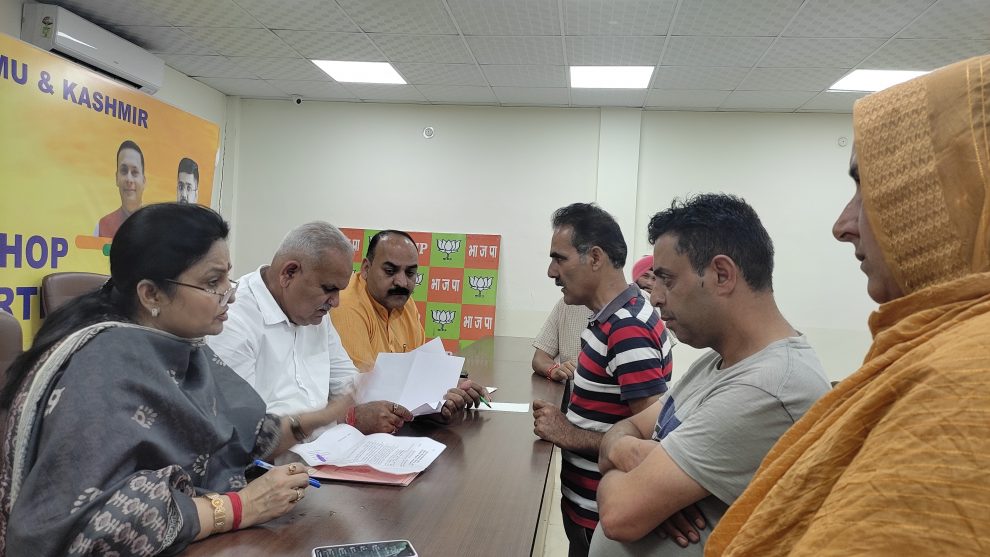 The Dispatch Staff
Add Comment
BJP leaders Sham Choudhary, Priya Sethi and Munish Sharma took up the issues immediately with the heads of various departments telephonically and were impressed with immediate solutions.

JAMMU: Sham Choudhary, J&K BJP Vice-President & former Minister, Priya Sethi, NEM & former Minister and Munish Sharma, BJP All Mocha Incharge, listened to the public grievances and took up the same with the concerned officials for early solutions. A large number of people and deputations visited the BJP headquarter, Trikuta Nagar, Jammu to meet the party leaders and narrate their woes and problems.

Main issues presented by the visiting individuals and deputations were related to the PHE, PWD, Rural Development, Revenue, Irrigation & Flood Control, Education, Agriculture etc. BJP leaders Sham Choudhary, Priya Sethi and Munish Sharma took up the issues immediately with the heads of these departments telephonically and were impressed with immediate solutions. Speaking on the occasion, Sham Choudhary said that the senior party leaders of the party are daily listening to the public issues at the party office and are ensuring that their issues get resolved at the earliest.

Priya Sethi said that the BJP leadership is concerned for the mitigation of the problems of people and these camps are ensuring the same on the ground. Munish Sharma said that common masses in large numbers are daily visiting the BJP office to get amicable solutions to their genuine issues.