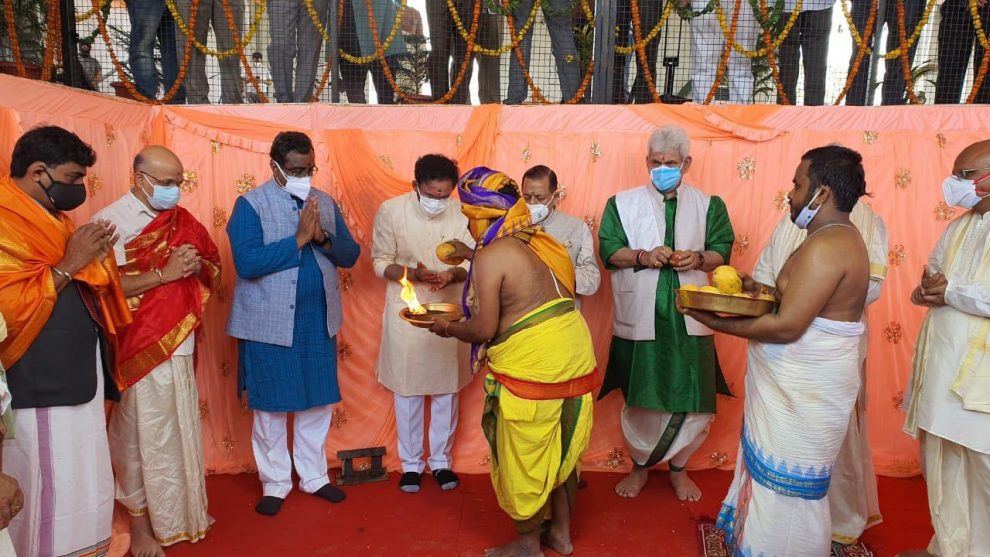 Jammu: Union Minister of State for Home G Kishan Reddy on Sunday said the security scenario in the country has witnessed a lot of positive changes over the past two years with improved law and order situation and declining violence by terrorists and left wing extremists.

He also said the renewed focus would be shifted towards the development of Jammu and Kashmir to fulfil the aspirations of the people after the ongoing fight against COVID-19 is won by the country.

“There are a lot of changes in the country over the last two years and barring one or two incidents, nothing had happened anywhere in the country,” Reddy told reporters here after taking part in the ‘Bhoomi Pooja’ in connection with the foundation stone-laying ceremony of Sri Venkateswara Swamy temple at Majeen here.

On April 1, Jammu and Kashmir administrative council headed by Lieutenant Governor Manoj Sinha approved a proposal to allot land to the Tirumala Tirupati Devasthanams (TTD) for building a temple and its allied infrastructure on lease basis for a period of 40 years.

Subsequently, a land measuring 62.02 acres at village Majeen was given to the TTD for building the temple and its allied infrastructures, pilgrim amenities complex, veda patasala, spiritual and meditation centre, office, residential quarters and parking.

Responding to a question about the changing security scenario in Jammu and Kashmir due to the efforts of the Centre, the minister said the situation has improved across the country.

“Take any issue – an incident, infiltration and all other angles – internal, hinterland, insurgency and left wing extremism – the terrorist incidents are not happening except along the border.

“A lot of changes have taken place in the country with the improvement in law and order, declining terrorism and no bomb blast over the past two years. Leave aside one or two incidents, nothing had happened,” Reddy said.

Referring to Jammu and Kashmir post abrogation of Article 370 and bifurcation of the erstwhile state into two union territories in August 2019, the minister said the Centre had planned a lot of things but unfortunately the outbreak of the COVID-19 pandemic gave a setback.

“Under the orders of the prime minister, 36 central ministers visited every nook and corner of Jammu and Kashmir to get the feedback and know the developmental needs of the people,” he said.

Reddy said the Centre had already made a lot of allocations to Jammu and Kashmir, and Ladakh but COVID-19 caused a lot of problems and the integrated development as planned could not happen.

“But with the blessings of God, the fight against the virus will be won and a renewed focus will be made towards development and fulfilling the aspirations of the people of Jammu and Kashmir,” the minister said.

Terming the construction of Balaji Temple in Jammu as a “significant development”, he said it would become a major centre on the circuit of various religious shrines in Jammu and Kashmir and give a boost to religious tourism.

“Ved patashala will also be established here and the devotees thronging the Vaishno Devi shrine will have an opportunity to pay obeisance at Balaji temple as well. It will develop into a religious circuit and generate economic activities for the people,” Reddy said.

Google asked to preserve data of Parra’s emails to Pak-based terror groups: Police
Even Ambedkar would have been slandered as pro-Pakistan by BJP: Mehbooba Mufti
Comment