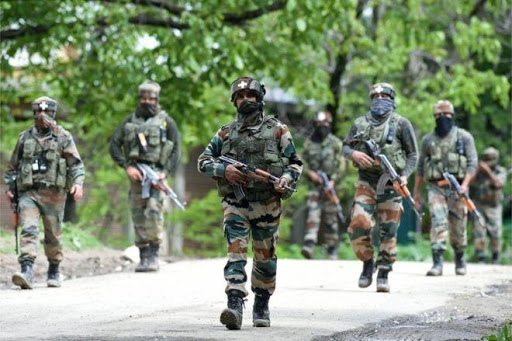 Srinagar: Security forces remained on high alert on Saturday to foil any attempts by militants to create disturbance during the 74th Independence Day celebrations in Kashmir valley, particularly in the summer capital, Srinagar, where drones were pressed into service to keep vigil.

Meanwhile, sharp shooters from different security agencies remained deployed in and around the venues for the ID celebration in the valley, where two policemen were killed and another was injured in militant attack in Srinagar on Friday.

The main ID function of the UT was held at S K Cricket Stadium in high security zone Sonawar, where Lt Governor Manoj Sinha hoisted the tri-colour. Security forces since early this morning could be seen using sniffer dogs and metal detectors around the venue to sanitize the area.

All roads around the stadium were closed by security forces since Friday. Road blocks, barbed wire and barricades were placed on the roads to prevent any militant attempt to disrupt the ID function. Road leading to the stadium at Radio Kashmir crossing remained closed with barbed wire and other barricades. Similarly the road was also closed at Rammunshi Bagh and no vehicle was being allowed towards the stadium.

Senior CRPF personnel were seen patrolling in the civil lines, including Lal Chowk, the nerve centre of the city, Gantaghar and Amira Kadal. The officers directed the field commander in these areas to remain on high alert to foil any militant attack. The directive came hours after JeM militant attack in Nowgam bypass area of Srinagar that left two police personnel dead and another injured.

A UNI correspondent during his visit to different parts of the city had to show his security pass and identity card, including at Bemina bypass, Batamaloo, Jehangir chowk, Natipora, Rambagh and civil lines.

The entire Lal Chowk, the nerve centre of the city, was out of bounds for any civilian movement in the morning. A large number of security forces and police personnel remained deployed to maintain law and order. Similar restrictions were also witnessed in the down town, Shehar-e-Khas and uptown.

Reports of unprecedented security arrangements were also received from other major district and tehsil headquarters, where ID functions were held on Saturday.