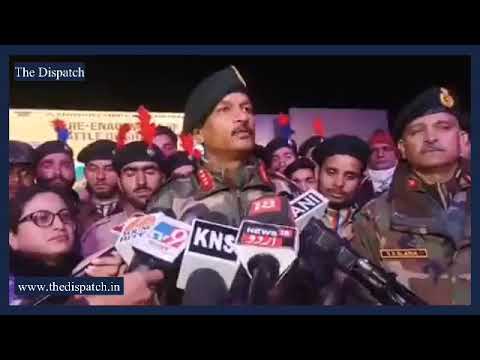 GULMARG: General officer Commanding (GoC) of the Army’s Srinagar-based 15 Corps Lieutenant General D P Pandey on Saturday said that the youth in Kashmir have understood that violence leads to nowhere.

He, however, said white-collar militants are now trying hard to lure teenagers between the age group of 16 to 19.

Talking to reporters on the sidelines of the Gulmarg Sports Festival jointly organised by the Army and Gulmarg Development Authority (GDA), Lt Gen Pandey said that Kashmir was more peaceful compared to the past few years as important security parameters—local militant recruitment, stone pelting, strike calls are all-time low.

Adding that he said, “This is because there is a huge tourist influx at the beginning of this the ensuing year and we expect a record number of tourist arrivals,” he said in reply to a query whether Kashmir was changing and heading towards peace.

It is easy to brainwash very young minds. Controlling local militant recruitment was and is very important for us and we are following a collective approach for which we need societies’ support as government and the army are already on job,” the GoC said.

Replying to another query, GoC Pandey said that the army’s calendar of events for this summer is full to ensure that message of peace that Kashmir is witnessing will go all across the world.

“The summer season is approaching, the army is ready with its calendar having sufficient events in pipeline to ensure the tourism which is the backbone of Kashmir economy remains intact. We expect a record number of tourist arrivals this year as already one lakh tourists have already visited Gulmarg so far,” the GoC said.

He said that the events and festivals being organised by the army, administration and other sections of society send a message to people across world that the situation is peaceful in Kashmir.

“Considering peaceful atmosphere, people across the world should visit valley which will boost the economy of Kashmir valley and will generate employment for locals, ” he said—(KNO)