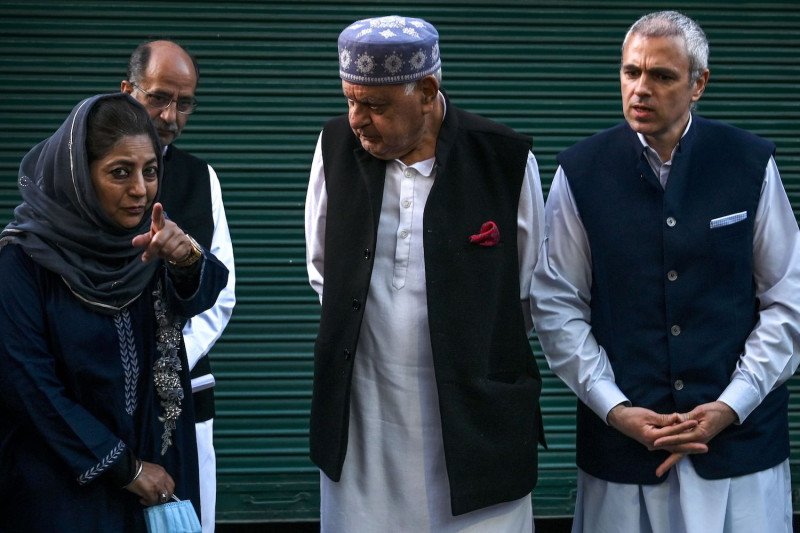 On the face of it not much may seem to be happening on the political scene in Kashmir valley but volatile turning of events in Delhi in the wake of ongoing farmer protest cannot hide the fact of frantic political activity going on in both Jammu region and Kashmir valley regarding the securing of the chairmanship of different district development councils.

Hidden from the news grabbing political events taking place in India and USA and ongoing trials and tribulations of corona virus pandemic, there exists the dynamic and fast changing political shenanigans happening in the mainstream political scene of the union territory of Jammu & Kashmir, which is witnessing quite an interesting turn of political events that includes signs of emerging new political alliances as a part of the political strategy to capture as many DDC chairman position as are possible.

While the BJP remains the clear and undisputed leader of the Jammu region having won most of its 75 DDC seats from Hindu majority parts of Jammu region and emerged as the major political player in Muslim majority parts of Jammu region like Pir Panchal and Chenab valley, the BJP party has also managed to emerge as the single largest political party overall in these DDC elections and has additionally opened its account in Kashmir valley. The Congress party, which previously used to lord over Jammu region has only managed 26 DDC seats from both Jammu and Kashmir regions. The emergence of BJP and decimation of Congress has complicated the electoral politics of the overwhelmingly Muslim majority Kashmir valley and Jammu region, where Muslims constitute nearly a third of the total population. This has been also been reflected in the formation of some of the recent political alliances like the 2015 BJP-PDP alliance in the erstwhile state of J&K.

While the Jammu region has by and large remained steadfastly behind the BJP, it is the Kashmir valley, which has been witnessing a lot of political churning due to the diversity of the fragmented mandate thrown by Kashmir valley in these DDC elections.

On the face of it, the People’s Alliance for Gupkar Declaration (PAGD) led by Farooq Abdullah technically emerged as the largest political alliance in these DDC elections having won 110 seats out of a total of 280 DDC seats in the UT of J&K, the fact however remains that both the process of seat distribution and subsequent behind the scene quarrels on securing the chairmanship of different councils in Kashmir valley has exposed the fragile opportunistic motive of this alliance, which claimed to have come into existence to secure the repeal of Article 370 and Article 35-A of the constitution of India and  restoration of the statehood for J&K.

The politics of Kashmir valley, which used to be dominated by Sheikh Mohamad Abdullah’s National Conference ceded space to Mufti Mohammad Syed’s People’s Democratic Party over last three decades and whatever little electoral space remained in the electoral politics of Kashmir region was grabbed by Congress, Yousuf Tarigami led CPI(M) in South Kashmir, Sajad Lone led PC in North Kashmir and Hakeem Yaseen led PDF in Central Kashmir. The formation of Altaf Bukhari led J&K Apni Party (often regarded as ‘King’s Party’, a reference to its indirect backing by Delhi) has added another dimension to the complicated and overly crowded electoral political scene of Kashmir valley (as opposed to Jammu region, where BJP continues to remain the only major political player).

Within this broader coalition of PAGD, Farooq Abdullah’s National Conference is the largest party with 67 DDC seats followed by Mehbooba Mufti’s PDP, which has won 27 seats. J&K Apni party has won 12 seats, Sajjad Lone’s PC has won 8 seats, CPI(M) has won 5 seats, Hakeem Yasin’s PDF has won 2 seats and in Jammu region Bhim Singh’s Panther’s Party has won 2 seats and BSP has won a single seat from Kathua. Rest of the remaining lion’s share of seats were won by independents, most of whom were either rebel or proxy candidates of mainstream political parties.

The decision to capture the post of chairman of different DDC seats in Kashmir valley has led to flurry of political activities, which includes the well-known disgruntlement within PAGD against the stubborn authoritarian dominance of National Conference, which many believe has led to the departure of Sajjad Lone’s PC from PAGD and there is a speculation of PDP also following suit. The much visible disinterest and detachment of political activities by NC Vice President Omar Abdullah is also being keenly observed in the political circles of Kashmir valley.

While Altaf Bukhari’s Apni Party may seem to have made a remarkable debut in Kashmir’s electoral politics, the fact remains that most of the seats won by candidates of Apni Party were due to the powerful political clout of its individual wining candidates rather than the political ideology of Apni Party, which is yet to see a credible organic political growth on ground. The recent public praise of Prime Minister Narinder Modi’s coronavirus vaccination drive by Shah Faesal, who formed J&K People’s Movement is also been keenly analyzed by political observers of Kashmir politics. Mehbooba Mufti’s PDP may seem to look like a laggard in these DDC election results but it is clear that the party has regained a lot of lost ground and saved itself from near decimation, which most political observers expected of the party.

All said and done, the jury is still out on what direction would the electoral politics of J&K will take in the near future. Will the existing dominant players like NC and PDP make their mark in Kashmir valley or will they eventually cede space to emerging political formations like Altaf Bukhari’s Apni Party, will depend on how the Apni Party manages to grow and take hold on ground in Kashmir valley organically based on its ideology. At the same time, sub regional political outfits of Kashmir valley like Sajjad Lone’s PC and Hakeem Yasin’s PDF also need to be keen watched, even as BJP is expected to retain its dominance of Jammu region on the crumbled stones of Congress Party. This is indeed a season of interesting political shenanigans that J&K would be witnessing in a very long time.

Post-Covid, emerging of the new global vaidya
The struggle with internet clampdown
Comment