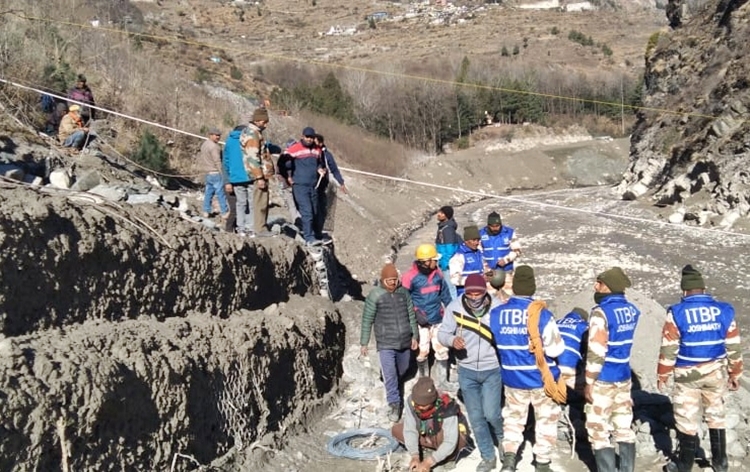 In Uttarakhand, search and rescue operation for the 25 to 35  people feared trapped inside the tunnel continued overnight at the Tapovan area of Chamoli district. 36 bodies have recovered and around 168 people are still missing.

More than hundred hours have passed since the flash flood-hit the Dhauli Ganga Power Project at Tapovan but there is still no ray of hope at the end of the tunnel. Rescue and search operation continued whole night in the tunnel where around 25 to 35 people are feared to be trapped but backflow of slush and water is making it difficult.

DIG Garhwal Neeru Garg said that rescue teams are trying to reach till 180 metres in the tunnel where these workers could be trapped. Vertical drilling also became difficult after 6.5 metres since water coming  underneath making it difficult for the drilling equipments to stay stable.

Another concern for the rescue operation is the small water pockets at the origin of Dhauli Ganga river breaking of which could increase the water level of river anytime. After recce and survey of the upper Himalayan region from where Dhauli Ganga river originates, the technical experts team had given details regarding the formation of water pockets in the region.

Administration tried to manually make the passage for water to release which increased the water level of river resulting in suspension of the rescue work for some time yesterday. Meanwhile, Chinook helicopters are being continuously utilised for transportation of men, material and heavy loads towards rescue operations in other calamity-hit areas of the district.