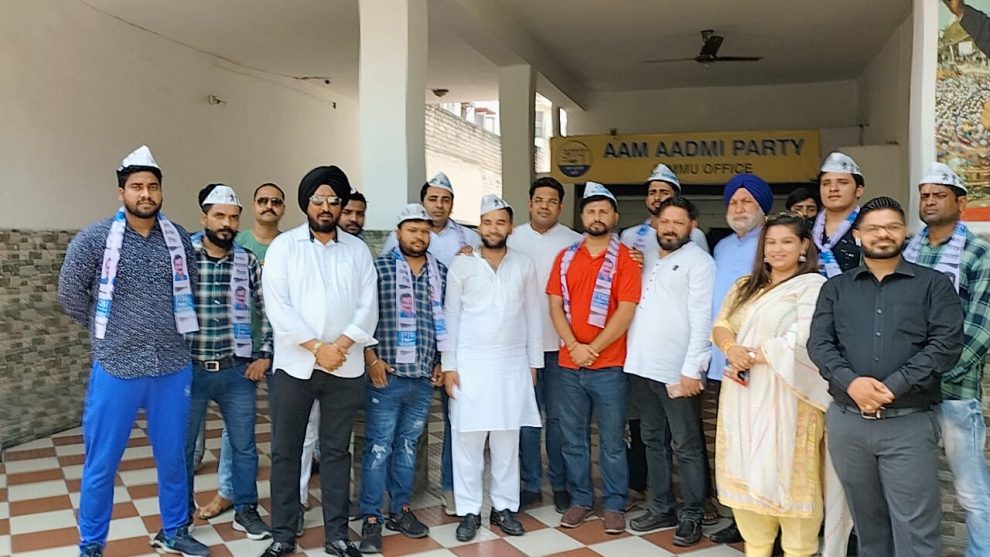 JAMMU: Aam Aadmi Party (AAP) has become a force to reckon with in the UT of J&K as it has started galvanizing people through its people-friendly approach and impeccable run in Delhi and Punjab state.

This was said by Gaurav Sharma Prabhari AAP J&K while interacting with new entrants to the party fold, who joined AAP after deserting BJP as the latter party disheartened them through its directionless policies and divisive agenda which the party is using to exploit masses.

A joining programme was held at AAP Head office in Jammu under the chairmanship of Gaurav Sharma Prabhari AAP J&K. Those who joined the AAP were convinced by the party leaders Mandeep Choudhary and Kuldeep Verma who have recently embraced the party and are proactive in carrying out party activities at the ground level. AAP leaders Balwant Singh Mankotia and Taranjit Singh Tony were also present.

Gaurav Sharma said that AAP has acquired a significant position in J&K and across the nation in very little time as people associated with the party are resolute to work for the common masses unlike BJP and Congress, which never think beyond the policy of divide and rule. AAP leaders Navneet Mishra and Raj Kapoor were also present during the joining programme. He urged the new entrants to disseminate pro-people policies of the party among masses and expose the double standards of BJP to ensure that the next government in J&K is of AAP which comes with a guarantee of being people oriented.

Later, Gaurav visited Udhampur and joined the monthly meeting of Balwant Singh Mankotia and asked party-cadre to gear up for upcoming elections.

Tony and Mankotia slammed BJP for deceiving the youth of the country in the name of 2 crore jobs annually as in actual the government led by this party has rendered crores of youths jobless and even penniless due to policy deficit and bankruptcy of minds of those who have been given responsibility of running the country. They said that it has been proved beyond any doubt that BJP is best at Jumlabaazi but on ground it is a complete failure because whatever was promised by the PM Narendra Modi with regard to inflation, fuel prices, black money, demonetization, joblessness and other issues has fallen flat with PM having no answers for any of his failures. “It is because of these failures that the saffron party has to rely on issues like communal tension, religious disparity, etc”, they said, adding that people have now understood the deception and hypocrisy of BJP leadership and that is the reason behind AAP clean sweeping the Punjab in Assembly elections.