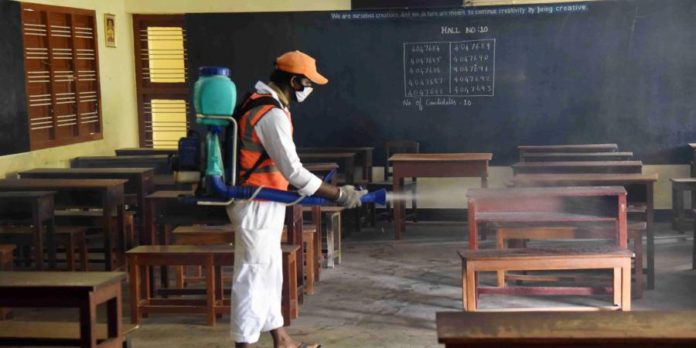 Jammu: Unlock 4.0 guidelines suggest that schools can reopen on a voluntary basis from September 21 onwards.
Jammu and Kashmir schools will reopen on Monday as per Unlock 4.0 guidelines on a voluntary basis.
On the other hand decision on schools reopening in Goa would be taken on October 2 after consulting the stakeholders.
Schools in Jammu & Kashmir would open with 50 percent attendance of staff and students.
The attendance of students will be subject to written consent from their parents. As per officials, all the SOPs will be followed when the schools re-open after such a long gap.
While speaking to the media, the official said, “Up to Class VIII, only 50 percent staff will report every day while students of Class IX, X, XI, and XII can come on a voluntary basis with 50 percent attendance. It is up to the parents to decide whether they allow their children to attend the school. Online classes and other aspects of digital education will continue to function.”

Goa schools will be opened in a staggered manner with Class 10, 12 resuming classes first. Goa Chief Minister Pramod Sawant after holding discussions with officials of the Education Department, representatives of principals, Parent Teachers Associations, and others said to the reporters that the government does not want to reopen schools against the wishes of parents. He further added that online classes would continue until schools reopen in the state.
Schools across the country were closed down since March this year due to the outbreak of the pandemic. Many states are planning to reopen schools that include Haryana, Gujarat, Delhi, while many states are still not convinced enough to reopen schools.