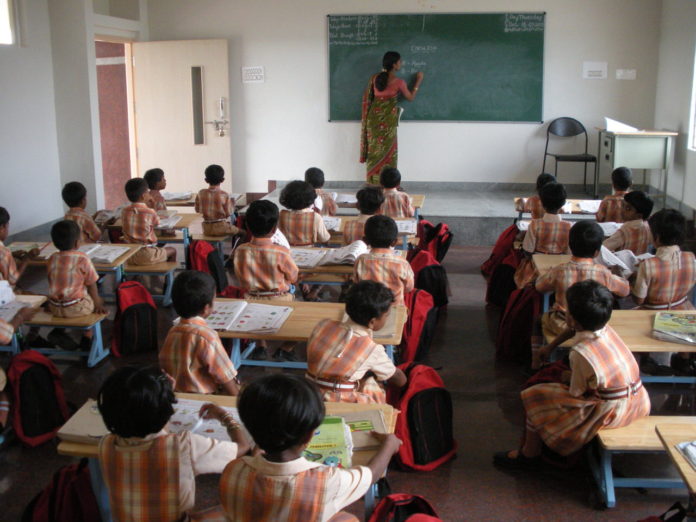 Jammu: Schools re-opened in Jammu and Kashmir region on Monday after a gap of five months but traditional enthusiasm and the buzz remained missing as majority of parents preferred to keep their children at home citing deadly Covid-19 as the main reason.
Some government as well as private schools wore a deserted look while in a few schools in the summer capital, a few students turned up for the consultations and interacted with the concerned teachers.

It has learnt that in some private schools academics were also held despite of clear cut directions not to resume academics in schools but consultation and guidance only.

A parent said that he cannot put his children at risk by sending them to schools in the ongoing pandemic especially when there was no direction to resume academics in schools.

“Nothing is worth than the wellbeing of my sons’ life, I cannot let him go for the schooling or consultations especially when the government is asking volunteer students to get the undertaking from parents of any risk,” he said. On Thursday, J&K government announced re-opening of schools for class 9th upto 12 on voluntary basis and against a undertaking from the parents that “schools will not be blamed if a student gets infected.”

Another parent said: “Currently, there is a surge in COVID-19 cases and despite closing the schools for more time, the government in a bizarre move is asking the innocent students to visit their respective schools on volunteer basis for consultation purposes.”

Meanwhile, some of the students expressed excitement about the reopening of schools.

One of the students of government Girls Higher Secondary School Kothi Bagh Higher said, “It was very difficult to understand the lectures on Zoom classes via low speed internet, but we are hopeful now that we will complete our syllabi at our school.”

She said the students have got a written letter of approval from their respective parents to attend the school.

Another student said that she was not allowed to attend her school and had to convince her parents to let her attend it.

The teachers of several government schools said that the institutions wore a deserted look.

“No student turn upto schools for consultation purposes even no online classes were held today because that was disrupted by some parents who were confused as to schools were asked to reopen for academics or some other purposes,” the government school teacher said.

“Some students have come here after a gap of six month. They have come here for counseling purposes. We are not holding the normal classes but are clearing the doubts and confusions of the students which has remained during the online classes,” said a teacher of Kothi Bagh Higher Secondary School.

Sources said that some schools in North Kashmir’s Baramulla district were holding academics following the reopening of schools wherein the authorities are supposed to hold only consultation activities. KNO