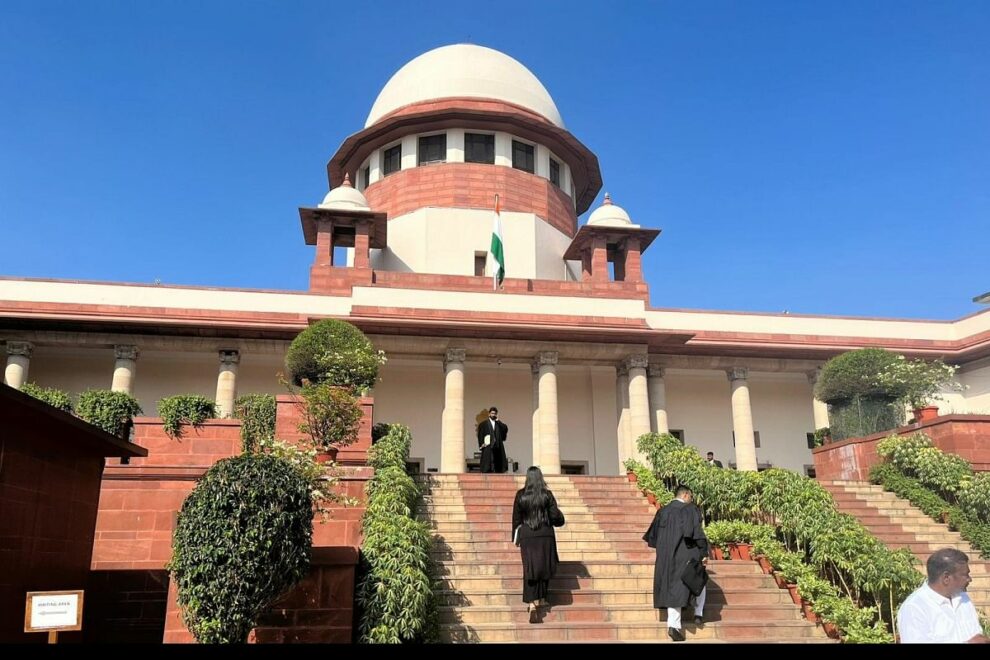 In this silly poll season amidst accusations slugfest between Parties in Modiland Gujarat, a five-judge Constitution Bench of Supreme Court’s quietly did a halla bol on “haste” and “tearing hurry” with which Election Commissioner (EC) Arun Goel was appointed, with his file moving at “lightning speed” in 24 hours while hearing petitions seeking Collegium-type body to appoint ECs and Chief Election Commissioner (CEC) last week.

“Goel’s application was made 18 November, it moved same day to officials, Prime Minister recommended him same day to President, it was cleared same day and he appointment same day…File hasn’t travelled even 24 hours. Why this urgency as vacancy happened in May?”  What kind of evaluation was there? Given in Government offices, files usually move slowly.”

Adding, “We are not questioning merits of Goel’s credentials but process.” “Show us mechanism you adopted in making appointment or is it on Council of Ministers recommendation. We are telling you openly, you (Centre) are violation Section 6 of 1991 Election Commission Act.”

Notwithstanding, Attorney General Venkataramani reply the mechanism followed “time-tested convention”. List of serving and retired officials in Secretaries position is prepared from which panel of names is prepared for Prime Minister and President.

The Prime Minister after consideration recommends one name to President. “That’s how the system works.” The ECs appointment follows seniority and senior among two ECs becomes CEC. It is not a pick-and-choose at all.” A dissatisfied Court asserted CEC should be someone “with character” who “does not allow himself to be bulldozed” like ex-CEC late Seshan.

Kudos to Apex Court for underscoring EC’s functioning and appointment of Commissioners. Questionably, can someone picked by Executive be reasonably expected to stand up to it? Just because Constitution did not cast an indispensable mandate on Parliament to frame a law does that mean Court cannot ask important issues of separation of powers and Executive domain?

Undoubtedly, successive Governments have destroyed Commission’s independence and Parties exploited Constitution’s silence by picking people with truncated tenures to hold influence over them. Till date both EC and Prime Minister’s office is silent on CEC and ECs’ joining “online interaction” called by it November last. Again, during Covid, the Commission imposed restrictions on electioneering only after Prime Minister completed his campaign. Or its unwillingness to censure BJP leaders during last Lok Sabha poll, delaying Rajya Sabha poll in Kerala to consider a reference from Law  Ministry.

Pertinently, the Commission draws its authority from Article 324 which states: The powers of “superintendence, direction and control of elections” is vested in an EC. The CEC and ECs are appointed by President to a tenure of six years, or up to age 65 years, whichever is earlier. The Constitution does not fix size of the Commission. Article 324(2) says “EC shall consist of CEC and such number of other EC’s, if any, as President may from time to time fix”.

But it needed a firebrand like Seshan who took over as CEC in 1990 who actually put Nirvachan Sadan on the electoral map by taking on Governments and leaders head-on by reading the riot act. He first petitioned Supreme Court against his two Commissioners Krishnamurthy and Gill. Alleging, “the two Commissioners were appointed not on bonafide grounds of volume of work but to stall functioning of the Commission.” He accused Krishnamurthy of being a “close family friend of Prime Minister Rao,” resulting in Court asserting, “institutions should not be reduced to mockery”.

In May 1993, Seshan refused to hold Lok Sabha, State Assembly bye-polls and West Bengal’s Rajya Sabha poll over EC’s jurisdiction over Government officials on election duty and Commission’s right to ask Government for a particular officer or staff to discharge its functions till it agreed.

In 1994 he told Government to purge two Cabinet Ministers Sitaram Kesari and Kalpnath Rai for trying to influence voters in Congress’s favour during elections. Kesri for extending reservation to Muslims and Rai for flooding poll-bound Karnataka and Andhra with free sale sugar. Adding, “It is a pity laws don’t provide for penal action against Ministers.”

In 1995, he postponed Bihar’s last phase of election as Chief Minister Lalu Yadav was caretaker Chief Minister after Legislative Assembly’s expiry which he said was undemocratic. An agitated Lok Sabha directed the Centre to convey its deep concern over repeated polls postponement. But Seshan refused to buzz.

In 2002 another CEC Lyngdoh was infantile terrible for politicians. In July 2002 Gujarat Governor Bhandari dissolved the Assembly nine months before its term expiry. A brazen act to force EC to hold early elections as Constitutional mandate prohibits more than six-month gap between two House sessions. Lyngdoh ruled out early elections which was endorsed by Supreme Court.

tRue this is not to detract from the Commission’s commendable work of not only overseeing the world’s largest electoral process but also formulating and implementing rules to ensure the poll field remains level and unfailingly ensures voters writ carries the day.

However, despite EC being a Constitutional body, process of appointing ECs remains unclear. In the last seven decades Parliament has failed to formulate a law, instead successive Governments have destroyed the Commission’s independence, arrogated power to itself and Parties have exploited Constitution’s silence by picking people with truncated tenures to hold influence over them.

Like the Court emphasized it is the manner of appointment, not duration of tenure that holds key to greater transparency. Perhaps the time has come to correct anomalies in appointing CEC and ECs as the Constitution is silent on this.

One idea is of including Chief Justice in the appointment committee to ensure “neutrality”. Another is expanding EC’s members pool to members beyond civil service. A shift towards a bipartisan, consultative appointment process is desirable like the CVC Act 2003 which empowers a committee comprising Prime Minister, Chief Justice and Leader of Opposition to recommend central vigilance commissioners. These three also make recommendations for appointment to Lokpal body and CBI director under Lokpal Act 2013.

At a time when fair elections are facing challenges of misinformation, hate speech, money and muscle power, greater transparency in Election Commissioners appointment can only add to the Commission’s reputation of integrity. Time now for the Executive, political actors, legislative and judicial branches to come together, draft a framework and endavour to make the EC not only transparent but also seen as being above any influence. This will help democracy.

The moment demands Commission self introspect and make sure it reads the Constitution not in isolation but in totality. The question that needs urgent answer: Is how election should be held and democracy function? Will it depend on Government anointing its favoured or former bureaucrats A B or C to the Commission? Or will Constitutional bodies act independently for the good of the nation? —– INFA