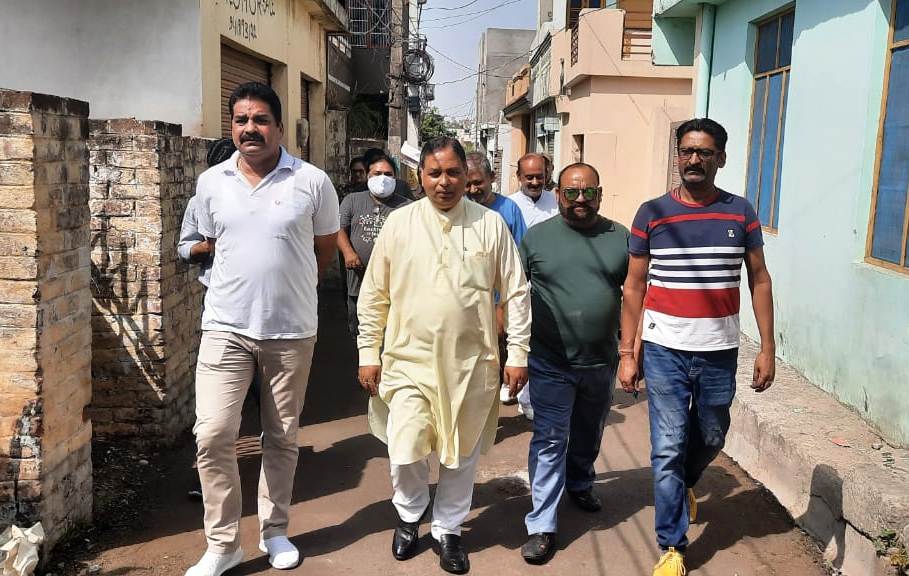 JAMMU: Former Minister and Ex MLA Jammu West Sat Sharma (CA) visited Ward 26 of the Constituency and inspected the ongoing developmental works in various areas of Subash Nagar. He was also accompanied by Chairman JMC & Corporator Hardeep Singh Mankotia, local residents and political activists of the area. Sharma visited the areas of the ward and inspected blacktopping works. He also visited other adjoining lanes where works of construction of lanes and drains is in progress.

Speaking on the occasion, Sat Sharma said that the main motive of the visit was to check ongoing developmental works in the Ward and to interact with the inhabitants. He stated that there were so many pending works in the area which were done during his tenure as MLA and now Corporators of BJP are doing an excellent job by serving the people in every way possible. He said that people  were earlier facing a lot of problems due to the power crisis and water supply but now all problems have been solved which has provided major relief to the people of this ward and other areas of the Assembly segment.

Hardeep Singh Mankotia highlighted the development works done in various parts of Jammu West. He said it was due to the efforts of Former MLA that helped in bringing some major projects in the constituency including Stadium at Bhagwati Nagar, changing of water pipes and sewerage lines, macadamisation of roads, installation of hundreds of transformers and many more. Jatin Gupta, Purshottam Khajuria, Purshottam Singh Chib, Pritima Sharma, Sham, Anil Bhat, Subash Gupta and several others were also present.