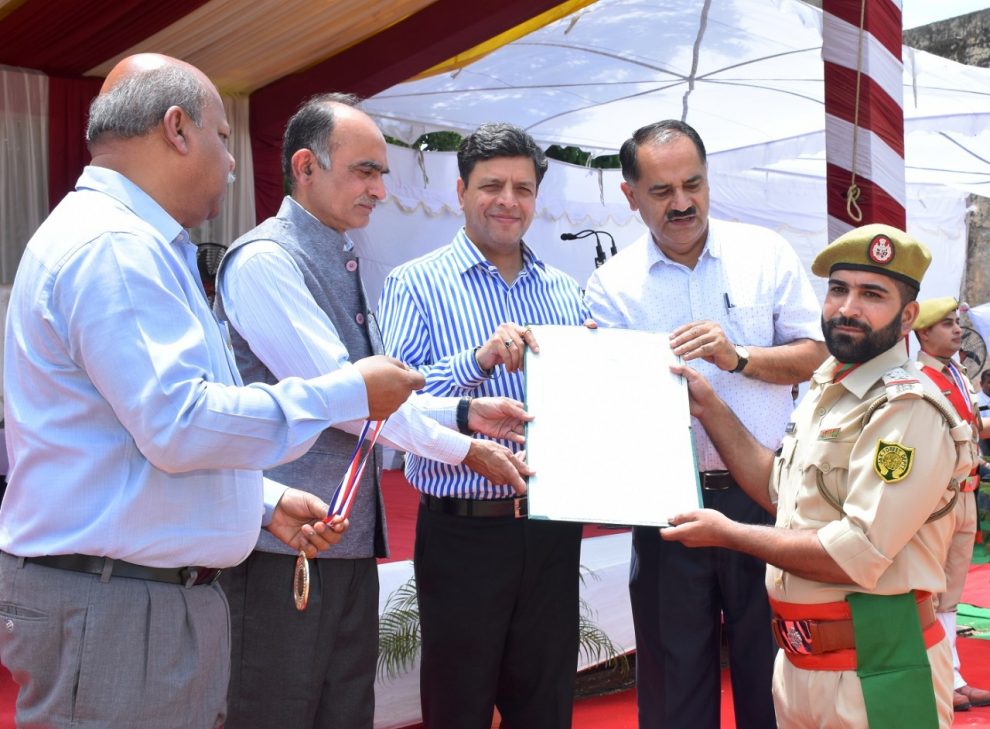 JAMMU: Commissioner Secretary Forest, Ecology and Environment, Sanjeev Verma, today chaired passing out parade of trainees of 22nd Kashmir Forester’s Training Course, organized by Forest department at Soil Conservation Training School, Miran Sahib.
Principal Chief Conservator of Forests & HoFF, Dr. Mohit Gera besides other senior officers of the department were present on the occasion.
Sanjeev Verma was accorded guard of honour followed by passing out parade by the trainees of 22nd Kashmir Forester’s Training Course, 58th Forest Guard Training Course, contingent of Forest Protection Force and the Brass band of J&K Police.
Speaking on the occasion, Commissioner Secretary congratulated the trainees of 22nd KFC for completing their one year training course successfully. He also applauded the forest department for successfully managing the training even during the pandemic period of COVID-19. He emphasized the trainees for participatory management of forests for future generations and exhorted them to dedicate themselves towards protection of green gold of the UT. He called for effective management of forests, Non Timber Forest Produce, Firewood and fodder with active participation of PRIs and people.
He asked the passed out trainees to gear up for protection of forests against hazards like forest fires, encroachments and illegal forest damage so that the forest wealth is effectively protected.
Dr. Mohit Gera, while addressing on the occasion, said that the forest frontline staff plays an important role in meeting the objectives of J&K Forest Department in forest protection and their sustainable management. He stressed on further raising the standards of training for frontline staff so that the future challenges are effectively countered in protection of forests. He spoke in detail about the changing and expanding role of forest frontline staff and highlighted the importance of PRI and other grass root level institutions with which the foresters will be closely working.
He spoke on the specific role of foresters in protection of forests and in afforestation being undertaken by the department in various schemes. He highlighted other initiatives of the department on creation of livelihood, ecotourism, soil and water conservation and exhorted the passed out officials to work with diligence and conviction in the field.
Earlier, the dignitaries conferred awards to the best performing trainees of 22nd KFC.
In academics, Shahid Sultan Bhat (Forester) of Wildlife Division Central, Kashmir secured first position, Rajinder Dev Sharma (Forester) of Nowshera Forest Division and Sandeep Sharma (Forester) of Poonch Forest Division shared the second position and Master Dheeraj Rampaul (Forester) of Wildlife Division, Jammu bagged third position.
In the Endurance Run, Yashbir Singh Langeh (Forester) of Wildlife Division Kathua secured first place, Fida Hussain Wani (Forester) of Wildlife Division North Sopore secured second place and Shahid Sultan Bhat (Forester) of Wildlife Division, Central Kashmir won the third place.
Besides, Sandeep Sharma (Forester) of Poonch Forest Division was declared as Best Silviculturist and Bukhtiyar Basheer (Forester) of KFTS Chitternar as all round best trainee.
Earlier, Additional Principal Chief Conservator of Forests Working Plan Research & Training, Sandeep Kujur, delivered the welcome address while Principal Soil Conservation Training School, Miran sahib presented the course report.
Conservator of Forests, Working Plan Circle, Tawheed Ahmad Deva and Naresh Majotra, moderated the whole programme and presented the vote of thanks.