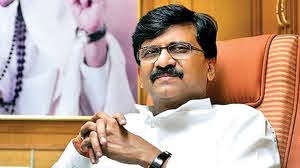 After Union Minister Raosaheb Danve said BJP will again come to power in Maharashtra in the next two to three months, Shiv Sena MP Sanjay Raut on Tuesday said that Maha Vikas Aghadi (MVA) government will complete its full term.
“Today is the death anniversary of a 3-day government that was formed last year. Our government will complete 4 years. Opposition leaders say such things in frustration as all their efforts have failed. They know very well that people of Maharashtra are with this govt,” Raut told reporters here.
Earlier on Monday, Union Minister Raosaheb Danve expressed confidence that the Bharatiya Janata Party (BJP) will again come to power in Maharashtra in the next two to three months.
“Do not think that our government will not be formed; it will be formed in two-three months… We are just waiting for the Legislative Council polls to conclude,” said BJP leader Danve during a campaign in Parbhani district.
Raut’s “death anniversary” remark was a jibe at BJP which formed an 80-hour government after the 2019 Maharashtra polls. The short-lived government was formed by BJP leader Devendra Fadnavis with the support of Nationalist Congress Party (NCP) leader Ajit Pawar.
On November 23, 2019, Fadnavis and Pawar were sworn-in as the chief minister and deputy chief minister respectively at Raj Bhavan in Mumbai.
However, the government lasted for only 80 hours with Pawar tendering his resignation as the deputy CM, paving the way for the Shiv Sena-led Maha Vikas Aghadi (MVA) alliance with the NCP and the Congress to assume office a few days later.
Shiv Sena president Uddhav Thackeray took oath as the Chief Minister of the MVA government on November 28 and Pawar became his deputy.