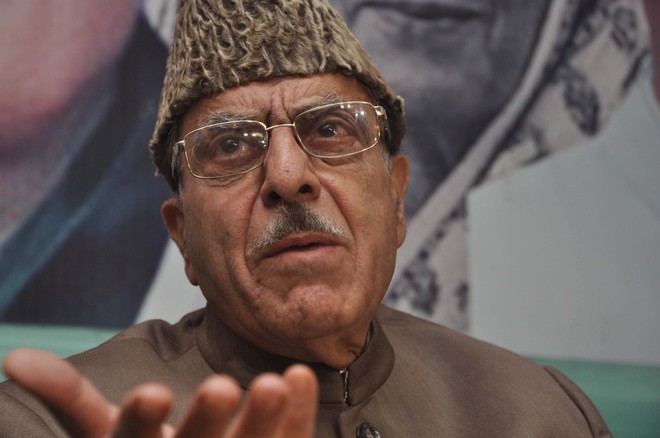 Srinagar, Nov 18: Congress leader Saifuddin Soz on Wednesday said by describing the alliance of mainstream political parties of Jammu and Kashmir as a “gang”, Union Home Minister Amit Shah has shown India and its democracy in poor light.

In a tweet on Tuesday, Shah asserted that Jammu and Kashmir has been and will always remain an integral part of India and termed the alliance of political parties of the Union Territory as ‘Gupkar Gang’ saying it is an “unholy global gathbandhan” against the country’s national interest.

In a series of tweets, he also questioned Congress leaders Sonia Gandhi and Rahul Gandhi whether they support the People’s Alliance for Gupkar Declaration (PAGD), a conglomerate of regional and national political parties in Jammu and Kashmir formed to demand the restoration of the Article 370, scrapped last year.

In a statement, Soz said, “It is really unfortunate that the Home Minister, Amit Shah, had to stoop so low and call the Kashmir Mainstream a ‘Gang’!”

He has shown India and its democracy in extreme poor light when it called Kashmir mainstream’s togetherness as ‘Gupkar Gang’, the Congress leader said.

The present ruling class at the Centre has already caused “great damage” to the system of governance in India by imagining that the BJP is the only safeguard for India’s democratic system, Soz said.

“The reality is, however, quite opposite to this! The fact is that the present day governance at the Centre has brought a bad name to India and its democracy and it is now a great jolt to the entire system that togetherness of Kashmir mainstream is seen as a threat to India’s democratic system.”

“One wonders why the democratic activity by Kashmir Mainstream Parties the NC, INC, PDP, PC, ANC and others is seen as a disruption by the Home Minister and others,” he added.

If the Union Home Minister is not prepared to deal with a democratic set-up in Kashmir, would he then wait for emergence of a set-up contrary to the present democratic combination, Soz asked.

“As for J&K state, the Constitutional relationship with the Union has already received a severe setback in recent years and the damage seems to be irreparable,” he said.

Shah had said the Congress and ‘Gupkar Gang’ want to take Jammu and Kashmir back to the era of terror and turmoil and they “want to take away rights of Dalits, women and tribals that we have ensured by removing Article 370. This is why they’re being rejected by the people everywhere”.

“The Gupkar Gang is going global! They want foreign forces to intervene in Jammu and Kashmir. The Gupkar Gang also insults India’s Tricolour. Do Sonia Ji and Rahul Ji support such moves of the Gupkar Gang ? They should make their stand crystal clear to the people of India,” the Union home minister has said.