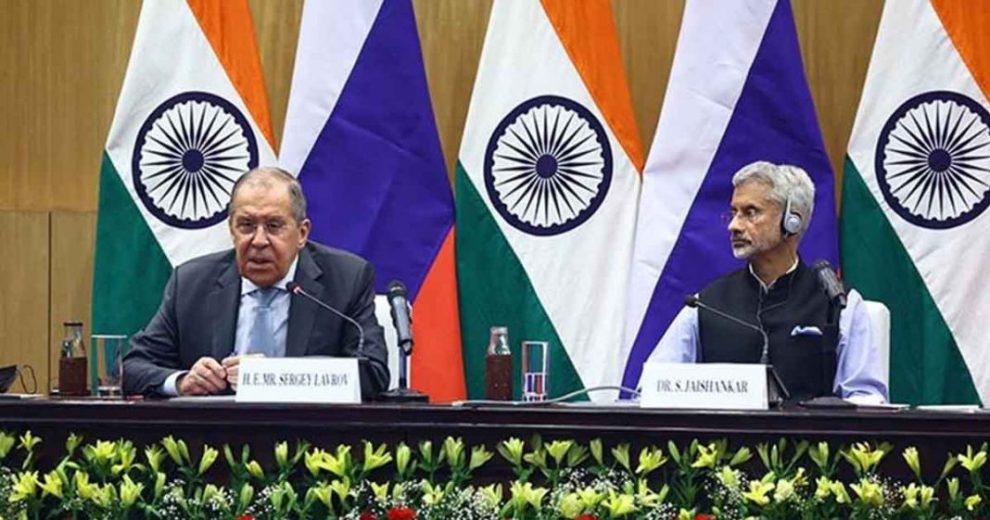 Russian Foreign Minister Sergey Lavrov’s two-day visit to Delhi was perhaps meant to placate India after it managed to exclude New Delhi from the one-day conference of Troika Plus on 18 March in Moscow, or to make sure that the deal on S-400 missile smoothly goes through. Or it could be a routine diplomatic act as there will be the Annual Summit meeting between the two countries sometime this year. Note that, the last year’s summit meeting was postponed, for the first time ever, as Russia tried to mediate in the China-India border face off. Whatever be the motives behind the visit, it may be in order that we analyse the impact of the visit. It is also necessary to do so, as Russia has been or has been perceived to be a friend of India for a long time, and stays as the elephant in the room in India-United States bilateral relations.

Although not much has come out into the public domain about the talks between Lavrov and Indian Foreign Minister S. Jaishankar, during the visit on 5-6 April, the peace building in Afghanistan was on the top of their agenda. Lavrov who was accompanied by Russia’s special envoy to Afghanistan, Zamir Kabulov, is believed to have briefed his Indian counterpart about the complex peace process underway in Afghanistan. But how would have Lavrov explained keeping India out of the latest discussion at the behest of Pakistan. New Delhi has heavily invested in the development and rebuilding of war-torn Afghanistan and had also agreed to sit with Taliban, a significant departure from its earlier position.

Russia that claims to be a friend of India buckled under pressure from Pakistan or even China to keep India out. Washington has been nudging New Delhi to engage in Afghanistan and the Afghan Foreign Minister Mohammad Haneef Atmar visiting New Delhi on 22-23 March admitted that “it was a mistake to have excluded India from the Moscow conference”. What does one make of the Russian role in isolating India from the troika plus group of the countries?

Both the Ministers talked about their concern and contours of Afghanistan peace process. Lavrov underlined the need for including the Taliban as they were a part of the Afghan society. Jaishankar talked about harmonising the interests of various stakeholders active in and around Afghanistan. He emphasised, “what happens in Afghanistan impacts our security directly” and  talked about adhering to foundational principles in rebuilding peace in Afghanistan. But they are really platitudes. There is no idea in the media or in the statements emanating from the talks, if Jaishankar raised the issue of India’s exclusion in the parleys in Moscow.

On New Delhi’s part, Jaishankar perhaps used the opportunity to share his frank assessment on the border situation in Eastern Ladakh along the Line of Actual Control. India has called upon China to disengage from all friction points along LAC following the agreement carried out in Pangong Tso. In the past, Russia had tried to mediate between India and China. At the same time, Lavrov was in Beijing in March to put up a joint front against the US. Lavrov has said on more than one occasion that formation of the Quad is an anti-China game. In this visit, Lavrov took a dig at Quad again, “I have heard of Asian NATO and Middle East NATO, Russia does not believe military blocs and alliances that are divisive”. On the other hand, New Delhi is progressively engaging in Quad.

At the time of writing this, India was joining its Quad partners– Australia, Japan and the United States– in the France-led joint naval exercise, La Perouse, in the Bay of Bengal from April 5 to 7. Emmanuel Lenain, the French Ambassador to India, was excited about this joint venture. In a statement in Delhi, he said, “I look forward to the La Perouse joint exercise, during which two French Navy ships will be joined by ships from India, Australia, Japan and the US for a concrete demonstration of multilateralism at sea.” This exercise is the reiteration of Quad’s commitment to a rule-based order in the Indo-Pacific, to make it open and free for navigation etc. The Quad plus exercise is to be seen as an opportunity to showcase the enormous naval strengths the five countries possess.

Another major item that would have figured in the discussion is about the delivery of S-400 missile defense system from Moscow, although both Foreign Ministers denied this specific issue coming up for discussion. Lavrov acknowledged, however, that the US puts pressure on any country that signs up with Russia on military contracts. India is likely to receive its first delivery of the missiles later this year. The delivery may incur US sanctions under the CAATSA– Countering America’s Adversaries Through Sanctions Act, although the US Secretary of Defense Lloyd James Austin in his last visit to New Delhi recently had assured that he had not raised the issue of sanction in his deliberations with the Indian side. But it is an open question whether the US will make that concession to India.

Arguably, Russia has been useful to India in enhancing India’s military power. Trading in military goods has been the driving motive for Russia’s relations with India for a long time. Even in this visit, Lavrov said that Russia will deepen the military cooperation with India. He added that both Foreign Ministers discussed the prospects of manufacturing Russian military equipment under the ‘Make in India’ scheme of things. New Delhi has paid a heavier price for Russian political support in the past on Kashmir etc. But New Delhi should now be wary of Moscow’s political compulsion to support China. At the same time, New Delhi’s dependence on Moscow for weapons is vulnerability that India’s decision makers need to take more seriously.

In India’s relations with Russia, New Delhi will have to revisit its strategy sooner than later. First is the efficacy of New Delhi’s diplomacy to drive a wedge between Russia and China. It should be noted that the Chinese economy is three times bigger than India and Russian economy put together. Furthermore, Moscow will lean more and more on Beijing as US ups the ante against Russia. The US is peeved with Russia for latter’s role in Ukraine, poisoning of its political opponents, and meddling in 2016 elections. Joe Biden, in the interim strategic guidance document talked of the “growing rivalry with China, Russia and other authoritarian states”. Russian President Putin, in some kind of response has hinted at the possibility of the military alliance with China.

Second, New Delhi and Russia trying for a multipolar global order is another strategy that needs to be revisited. Experts and observers would contend such a strategy does not reflect the reality of world politics today, and desire cannot overcome the reality.