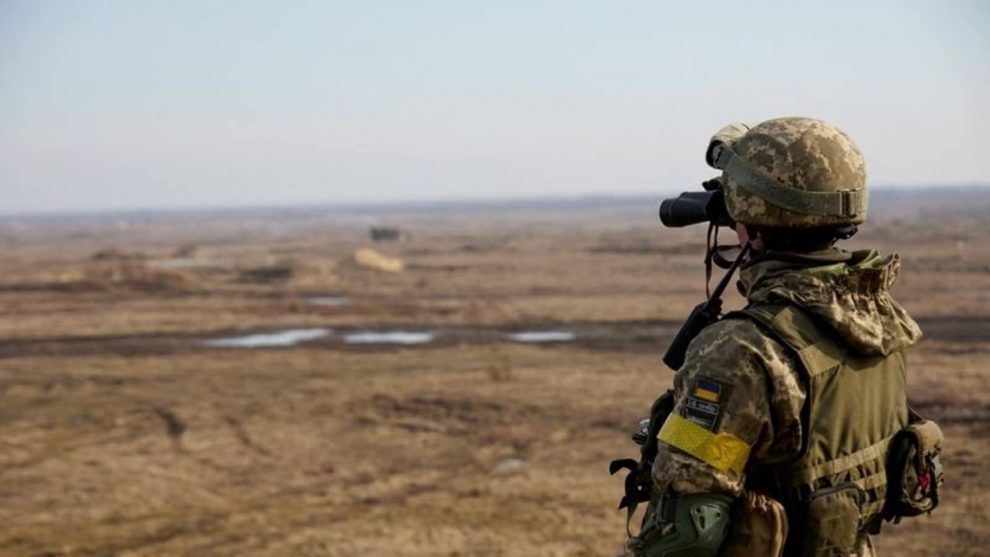 Warsaw, Feb 25 (AP) Russia launched a full-scale invasion of Ukraine that opened with air and missile strikes on Ukrainian military facilities before troops and tanks rolled across the borders from the north, east and south.

The Ukrainian military fought back on multiple fronts. President Volodymyr Zelenskyy said in a video address early Friday that 137 people, both servicemen and civilians, have been killed and hundreds more wounded.

A senior U.S. defense official said Russia may be intent on seizing Kyiv, the capital, and other key cities and ultimately installing a more friendly government. Explosions were heard in Kyiv before dawn on Friday.

As many Ukrainians piled into trains and cars to flee the fighting, the U.S. and European leaders rushed to punish Russia with strong financial sanctions. NATO moved to strengthen its eastern flank.

Here are the things to know about the conflict over Ukraine and the security crisis in Eastern Europe:

In a televised address as the attack began, Russian President Vladimir Putin said it was needed to protect civilians in eastern Ukraine, where Ukrainian forces and Russia-backed separatists have been fighting for almost eight years.

The U.S. had predicted Putin would falsely claim that the rebel-held regions were under attack to justify an invasion.

The Russian leader warned other countries that any attempt to interfere in Ukraine would lead to consequences you have never seen in history” a dark threat implying Russia was prepared to use its nuclear weapons.

Putin accused the U.S. and its allies of ignoring Russia’s demands to block Ukraine from ever joining NATO and offer Moscow security guarantees.

Putin said Russia does not intend to occupy Ukraine but plans to demilitarize it, a euphemism for destroying its armed forces. He urged Ukrainian servicemen to immediately put down arms and go home.

Soon after his address, explosions were heard in the cities of Kyiv, Kharkiv and Odesa.

ZELENSKYY RESPONDS TO THE ATTACK

Ukraine’s president urged residents to remain calm and to stay at home, and pleaded with world leaders to punish Putin with even more severe sanctions.

He vowed that Ukraine will defend itself and ordered a full military mobilization. Ukraine’s army stands at 250,000 servicemen with 140,000 reservists. The U.S. said Russia had nearly 200,000 troops arrayed near Ukraine’s borders before the invasion began.

Zelenskyy said he has information that he’s the No. 1 target for the invading Russians but he is determined to remain in Kyiv.

AN UNEASY NIGHT IN KYIV

Fearing a Russian attack, many of the capital’s residents took shelter deep underground in metro stations. People brought sleeping bags and blankets, dogs and crossword puzzles to pass an uneasy night in the makeshift bomb shelters.

In the early hours of the morning, several explosions were heard in different parts of the city.

Kyiv Mayor Vitaly Klitschko had called on the city’s 3 million people to stay indoors unless they worked in critical sectors and said everyone should prepare go-bags with necessities such as medicine and documents.

Ukraine said it lost control of the Chernobyl nuclear site after Ukrainian forces waged a fierce battle with Russian troops. A nuclear reactor at the plant 130 kilometers (80 miles) north of Kyiv exploded in April 1986, sending a radioactive cloud across Europe. The damaged reactor was later covered by a protective shell.

Alyona Shevtsova, an adviser to the commander of Ukraine’s Ground Forces, wrote on Facebook that the staff had been taken hostage when Russian troops seized the facility. The White House press secretary expressed alarm, saying it could hamper efforts to maintain nuclear facility.

U.S. President Joe Biden said Putin has chosen a premeditated war that will bring a catastrophic loss of life and human suffering.”

The leaders of the Group of Seven called on the international community “to condemn this attack in the strongest possible terms, to stand shoulder to shoulder with Ukraine, and raise their voice against this blatant violation of the fundamental principles of international peace and security.

The head of the U.N. refugee agency urged neighboring countries to keep their borders open for Ukrainians fleeing the fighting. U.N. High Commissioner for Refugees Filippo Grandi said his agency had stepped up its operations and capacity in both Ukraine and its neighbors.

Beyond its human toll, the conflict looks set to send prices spiraling even higher at gasoline pumps and grocery stores around the world.

Russia and Ukraine are major producers not only of energy products but also grains and various other commodities. War could upend global supplies, as could sanctions brought by the United States and other allies.

WHAT SANCTIONS ARE WESTERN POWERS IMPOSING?

In announcing a new round of sanctions on Thursday, Biden said the U.S. and its allies will block the assets of four large Russian banks, impose export controls and sanction oligarchs.

The penalties fall in line with the White House’s insistence that it would look to hit Russia’s financial system and Putin’s inner circle, while also imposing export controls that would aim to starve Russia’s industries and military of U.S. semiconductors and other high-tech products.

New U.S. sanctions also targeted the military and financial institutions of Belarus, which Russia is using as a staging ground for its troops moving into Ukraine from the north.

British Prime Minister Boris Johnson said he would aim to cut Russia off from the U.K.’s financial market.

The sanctions include freezing the assets of all major Russian banks, including VTB Bank, its second-biggest. Britain also plans to bar Russian companies and the Russian government from raising money on U.K. markets.

Britain will ban the export of a wide range of high-tech products, including semiconductors, to Russia and bar its flagship airline, Aeroflot, from landing at U.K. airports.

The European Union and other Western allies, including Australia, Japan and South Koreas, announced similar sanctions.

OTHER REPERCUSSIONS FOR RUSSIANS

UEFA will no longer host the Champions League final in St. Petersburg in May, a person with knowledge of the decision told The Associated Press. The person spoke on condition of anonymity to discuss private talks. An extraordinary meeting of the UEFA executive committee will be held Friday.

Valery Gergiev, a conductor who is close to Putin, will not lead the Vienna Philharmonic in a five-concert U.S. tour that starts at Carnegie Hall on Friday. Milan’s Teatro alla Scala sent a letter to Gergiev asking him to make a clear statement in favor of a peaceful resolution in the Ukraine, or he would not be permitted to return for his next scheduled performance on March 5.

Russians shocked by the invasion turned out by the thousands for street protests in Moscow and other cities. They signed open letters and online petitions demanding the Kremlin halt the assault. One petition garnered 330,000 signatures by the end of the day.

The crackdown was swift. Some 1,745 people in 54 Russian cities were detained, at least 957 of them in Moscow.

State television was all in for the invasion, with one host calling it an effort to protect people in eastern Ukraine from a Nazi regime.

The European Union-led peacekeeping force in Bosnia announced that it would double the number of its ground troops to prevent ripple effects from the conflict in Ukraine.

The force described the step as a precautionary move. The deterioration of the security situation internationally has the potential to spread instability to the ethnically divided Balkan country, it said.

A staunchly pro-Russian Bosnian Serb leader, Milorad Dodik, has for years advocated the separation of the semi-autonomous Bosnian Serb mini-state from the rest of the country.

The EU force announced that four companies of its reserve forces from Austria, Bulgaria, Romania and Slovakia would deploy to Bosnia over the next two weeks to reinforce its 600-strong contingent already stationed in the country. The new deployments will total 500 troops.

The countries on NATO’s eastern flank, all under Soviet domination during the Cold War, are especially nervous.

The Baltic states of Lithuania, Latvia and Estonia wondered if they could be the Kremlin’s next target. They all have received the first batches of U.S. military troops and equipment as promised this week by Biden.

The parliament in Poland, which borders both Ukraine and Belarus, strongly denounced Russia’s attack on Ukraine and vowed its support to Ukraine.

U.S. Ambassador Mark Brzezinski sought to assure Poland that it is safe. He noted there are now 10,000 U.S. soldiers in Poland. More than half were deployed in recent weeks in response to the Russian threats.

Stoltenberg said: Make no mistake: We will defend every ally against any attack on every inch of NATO territory.

China’s customs agency on Thursday approved imports of wheat from all regions of Russia, a move that could help to reduce the impact of possible Western sanctions.

China’s market is a growth area for other suppliers, but Beijing had barred imports until now from Russia’s main wheat-growing areas due to concern about possible fungus and other contamination.

Russia is one of the biggest wheat producers, but its exports would be vulnerable if its foreign markets blocked shipments in response to its attack on Ukraine.

Thursday’s announcement said Russia would take all measures to prevent contamination by wheat smut fungus and would suspend exports to China if it was found.

The websites of Ukraine’s defense, foreign and interior ministries were unreachable or painfully slow to load Thursday morning after a punishing wave of distributed-denial-of-service attacks as Russia struck at its neighbour.

In addition to DDoS attacks on Wednesday, cybersecurity researchers said unidentified attackers had infected hundreds of computers with destructive malware, some in neighbouring Latvia and Lithuania.

Officials had long expected cyberattacks to precede and accompany any Russian military incursion.