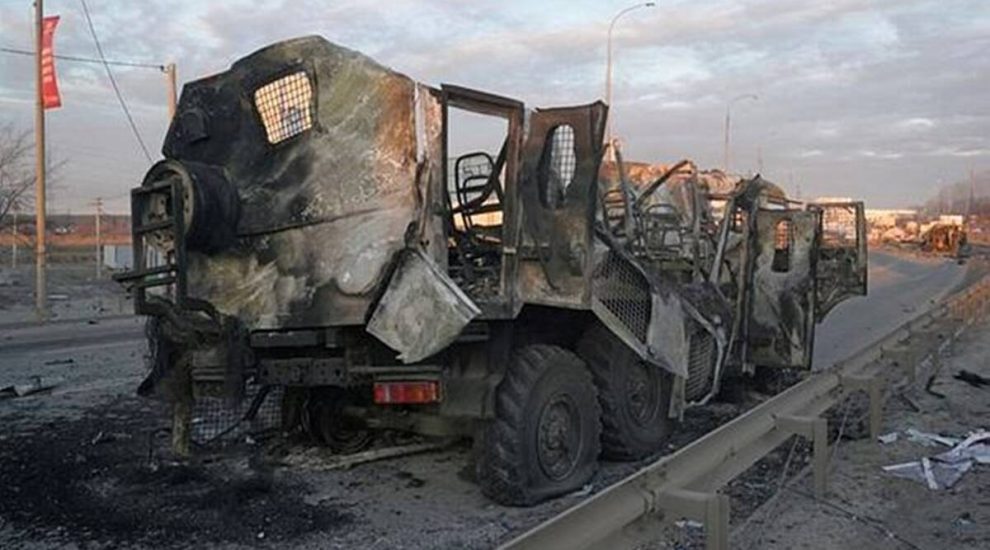 The Dispatch Staff
Add Comment
One could write trees of notes to explain the reasons for Russian invasion. That is not the remit in this article. The war is on causing deaths and destruction in Ukraine. The urgent objective is to end the war, and analyse what other countries in the international community are doing or not doing to contribute to this end.

The invasion of Ukraine, a sovereign and independent country, by Russia has shaken the international community. It is unlike the NATO and American forces moving into Iraq, Syria or Afghanistan, where dictators and fundamentalists were torturing their own people. Russia invaded Ukraine on a twisted narrative of Russian leader Vladimir Putin about the history between the two countries, that Russians and Ukrainians are one people and hence inseparable.

Various reasons and interpretations of the motivations for Russian outright armed invasion have been put forth by leaders, experts and observers. The front-running perspective of the war is that Ukraine has become a hapless pawn in rivalry between US-led NATO and Russia. NATO sought to expand up to Ukraine and through Ukraine to Russian borders, which the Russian ‘strong-man’ Putin resisted.

After Russia had annexed Crimea in 2014, Ukraine had tilted to the West and was contemplating joining the European Union and NATO. Russia was trying to keep Ukraine under its influence by supporting Russian-speaking insurgents, by bullying Ukraine with massive deployment of force on Ukraine-Russian border, and finally moving Russian army into Ukraine.

The other major interpretation of Russian military action is Putin’s reading of history which suggests that Ukrainians and Russians have same ancestry and thus, Ukraine is an inseparable part of Russia. Putin colours this view by seeking to bring order in Ukraine. He said in a television speech on 21 February 2022, that “the special military operation is to protect people who have been abused by the genocide of Kyiv region for eight years. We will strive for the demilitarization and, de- Nazifications of Ukraine”.

One could write trees of notes to explain the reasons for Russian invasion. That is not the remit in this article. The war is on causing deaths and destruction in Ukraine. The urgent objective is to end the war, and analyse what other countries in the international community are doing or not doing to contribute to this end.

We are here talking about India’s stance on the war between Russia and Ukraine. To put it pithily, New Delhi’s position vis-à-vis the Ukrainian crisis has been disappointing so far. It has also diminished India’s chance or to be precise, Prime Minister Narendra Modi’s ambition of becoming a Vishwa Guru. India’s balancing role between two super powers (in the cold war era), and now between the US led Bloc and the United Front comprising Russia and China has reached a biting point; New Delhi could neither go forward or backward.

In the current war, India has shown a pro-Russian tilt which is a function of New Delhi’s ‘time tested’ friendship with Moscow as well as of geopolitical necessity. So say the pro-government strategic community and the proponents of the concept of strategic autonomy.

The foregoing formulation does not hold water. In fact, it was started by Jawaharlal Nehru who had conceived the policy of non-alignment. It was an impractical idea from the word, go. All countries are interdependent, no country could remain non-aligned or isolated. Nehru could not maintain it.  In 1956, he criticised the Anglo-French invasion of Suez Canal, but kept quiet on Soviet Union’s attack on Hungary the same year. The explanation for such contrasting positions was that Nehru relied on the Russian Veto on Kashmir. But it was Nehru who took an incredible and inexplicable step in taking the Kashmir dispute to the United Nations. At any rate, that is history.

The current regime which is super-critical of Nehru on his foreign policy is adopting  the same stance of neutrality, middle-of-the road, and so-called balancing act. Truly, India’s foreign policy has been dubbed by many as ‘continuity and change.’ Modi is following the same policy of continuing with non-alignment. He even addressed digitally a non-alignment meeting. Admittedly, there has been some change, but no departure from the past on China and Russia.

What could India do in the case of invasion of Ukraine? Agree that New Delhi could not suddenly oppose Russia. But some of us have been urging New Delhi to choose the corner, either the Democratic world or the Authoritarian block, either US and its allies or the China- Russia axis.

India has abstained twice (once in the company of China) in the United Nations on Russian invasion with small murmurs against the invasion. New Delhi did not want to offend Russia for their long friendship and the arms trade.  If India joined a security bloc with tacit assurance of support for her territorial integrity, India’s dependence on Russian arms would have been reduced. If New Delhi actively made friends with Japan and South Korea at the behest of United States, it would not have relied on Chinese material for her economy after China has taken away at least 50000 square kilometres of our land.

Secondly, the so-called strategic autonomy has cost India billions of dollars in arms purchase affecting her growth and development. India, as a poor and developing country, could have followed the policies adopted by Japan and Germany in reducing the defence budget and built her economy.

Anyway, here we are now. India’s option to get out of China-Russia axis, like SCO, or BRICS is limited by the mistakes made by the West. American and NATO leadership should not have seduced Ukraine into joining NATO. There has been a promise by Americans that NATO would not expand into the East. George Kennan, the American diplomat had warned, “expanding NATO would be the most fateful error of American policy…..it would inflame the nationalistic and militaristic tendencies in Russia.” Taking Ukraine into NATO is like Americans sitting on Russian borders. In a sense, Americans provoked the invasion without guaranteeing Ukraine’s security.

New Delhi has a great scope in resolving the impasse and stop the on-going war. New Delhi is correctly focusing its diplomatic resources in evacuating Indians in Ukraine. New Delhi should take two more steps. The Indian leadership should convince Putin that annexing Ukraine or proxy-ruling the country as a vassal state is not an option. Ukraine could be declared as an internationally acknowledged neutral country like Austria and Switzerland are. That would be a fair compromise. Enrolling Ukraine as a member of European Union or NATO may not work too.

The second step for New Delhi could be, should the first step fail, to differentiate between Putin and Russia. Evidently, many Russians are against the war, and Putin’s autocracy has opposition in the country. Putin has violated international laws and the BRICS resolution just six months ago forgoing the use of force. New Delhi could be seen as guilty of complicity unless it finds a way out for Russia or condemn it.

New Delhi could establish other channels than Putin to help consolidate democracy in Russia. That will help India also in the long run. In any event India’s credibility and capability are challenged at this time of International Politics. We wish India succeeds in overcoming those challenges.