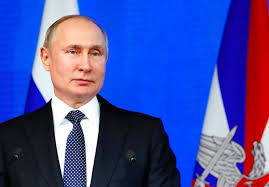 President Vladimir Putin said today that Russia is the only country in the world that has hypersonic weapons. Speaking at a meeting with top military brass, Putin said that for the first time in history Russia has an edge in designing a new class of weapons unlike in the past when it was catching up with the United States.

He said that the first unit equipped with the Avangard hypersonic glide vehicle is set to go on duty this month, while that the air-launched Kinzhal hypersonic missiles already have entered service. Putin has said that the missile flies 10 times faster than the speed of sound, has a range of more than 2,000 kilometers (1,250 miles) and can carry a nuclear or a conventional warhead.