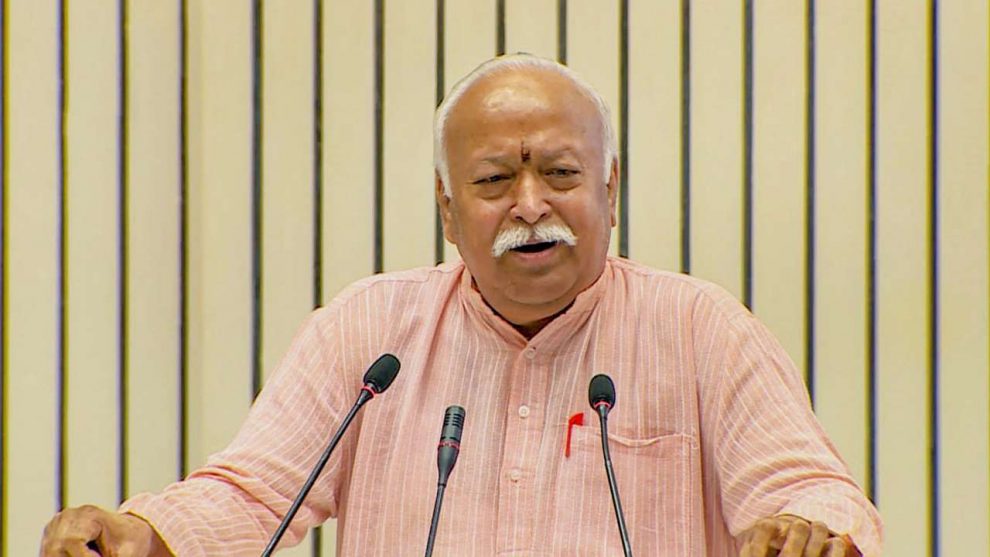 Jammu : Urging Muslims not to get “trapped in the cycle of fear” about Islam being in danger in India, RSS chief Mohan Bhagwat on Sunday said those asking Muslims to leave the country cannot call themselves Hindus and those indulging in lynching people in the name of cows must know that they are against Hindutva.

He, however, said that there have been some “false cases” of lynching at times that have been filed against some people.

Addressing a book-release function here, Bhagwat said the DNA of all Indians are the same.

Asserting that it is not some image makeover or vote bank politics for the RSS to woo Muslims ahead of assembly elections, he said his organisation firmly believes that in a democracy like India, the only dominance can be of Indians, rather than of Hindus or Muslims.

Allaying fears that majoritarianism is on the rise in India, Bhagwat said, “If anyone says that Muslims should not stay in India, then he is not a Hindu.”

When atrocities take place against minorities, voices of protest come from the majority itself, he said at an event ‘Hindustan First Hindustani Best’ organised by Muslim Rashtriya Manch.

At the programme, he also released a book “The Meeting of Minds” by Khwaja Ifteqar Ahmed.

Bhagwat took on those indulging in lynching, saying, “Cow is a holy animal, but those involved in lynching are against Hindutava”. Though at times, some “false cases” of lynching have been registered against some people, Bhagwat said.

His remarks came days after a similar incident was reported from Ghaziabad where Bhagwat was speaking.

Reiterating that since Indians are descendants of the same ancestors their DNA is the same, Bhagwat said, “Hindu-Muslim unity can be misleading as they are same and one entity.”

He also asked Muslims to “don’t get trapped in the cycle of fear that Islam is in danger in India.”

The RSS, which is the ideological fountainhead of the ruling Bharatiya Janata Party, has been accused by opposition political parties of promoting majoritarianism and Hindutava in the country.

Countering these charges, Bhagwat asserted that it is the Sangh’s work to build the nation by uniting people.

The work for uniting the society cannot be left to political parties as they cannot act as tools to unite people, although they can distort it, he said.

Underlining that development is not possible without unity in the country, the RSS chief stressed that the basis of unity should be nationalism and the glory of ancestors.

The only solution to Hindu-Muslim conflict is dialogue, not discord, he said.

Bhagwat said, “If you don’t want to call yourself Hindu, you can say Indian instead. But we should leave aside these differences over words and should work together for the country.”

In the beginning of his speech, Bhagwat distanced the Sangh from electoral politics and said his presence at such an event should not be seen from the prism of vote bank politics. He further said this is not an image makeover or an attempt to woo Muslims ahead of the assembly elections.

Bhagwat said that neither the Sangh is in politics nor does it bother about maintaining an image. “It keeps on doing its work to strengthen the nation and for the welfare of all in the society,” he said.

The RSS is not interested in party politics. It has a view and that is not in anyone’s favour but of the country. The Sangh supports those who speak for the country, he said.