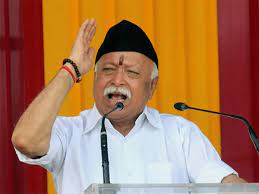 Jammu: Rashtriya Swayamsevak Sangh (RSS) chief Mohan Bhagwat on Sunday expressed hope that the Kashmiri Pandits who were displaced from their homes in the 1990s after the onset of terrorism will soon return back to their houses in the Kashmir valley.

“I have a feeling that the day is very near when the Kashmiri Pandits will come back to their homes and I wish that day comes soon,” said Bhagwat while addressing the Kashmiri Hindu community via video conference on the last day of the Navreh celebrations here. Bhagwat said that the Vivek Agnihotri directed ‘The Kashmir Files’ has revealed the true picture of the Kashmiri Pandits and their exodus in the 1990s from the Kashmir valley.

The Vivek-Agnihotri directed ‘The Kashmir Files’, which was released in theatres on March 11, stars Anupam Kher, Mithun Chakraborty, Pallavi Joshi, Darshan Kumaar and others. The film has sharply polarised the political spectrum in the country.

He said, “Some are in support of this movie, some are calling it half-truth… But the common people of this nation are of the opinion that by presenting this harsh truth to the world, this film has not only presented the pain of displaced Kashmiris but shaken us as well.”

He further said that nobody can force the Kashmiri Pandits to leave, and if anybody tries to do it, then he will have to face the consequences.

Sanjeevani Sharda Kendra (SSK), Jammu, organised a three-day programme, beginning April 1 and will conclude today, to celebrate the ‘Tyaag and Shaurya Divas’, urging the ‘Kashmiri Samaj’ to take a pledge to return to their homeland on the auspicious occasion of Navreh. The film shows the plight of Kashmiri Pandits who had to flee the valley in the 1990s to escape the militancy.

The SSK has been celebrating the ‘Navreh, Tyaag and Shaurya Divas’ with the community members and school children for several years while also organising seminars, essay writing and quiz competitions to highlight the plight of the Kashmiri Pandits. This coincides with the first day of the Chaitra (spring) Navratras. Kashmiri Pandits dedicate the Navreh festival to their Goddess Sharika and pay homage to her during the festival. (ANI)