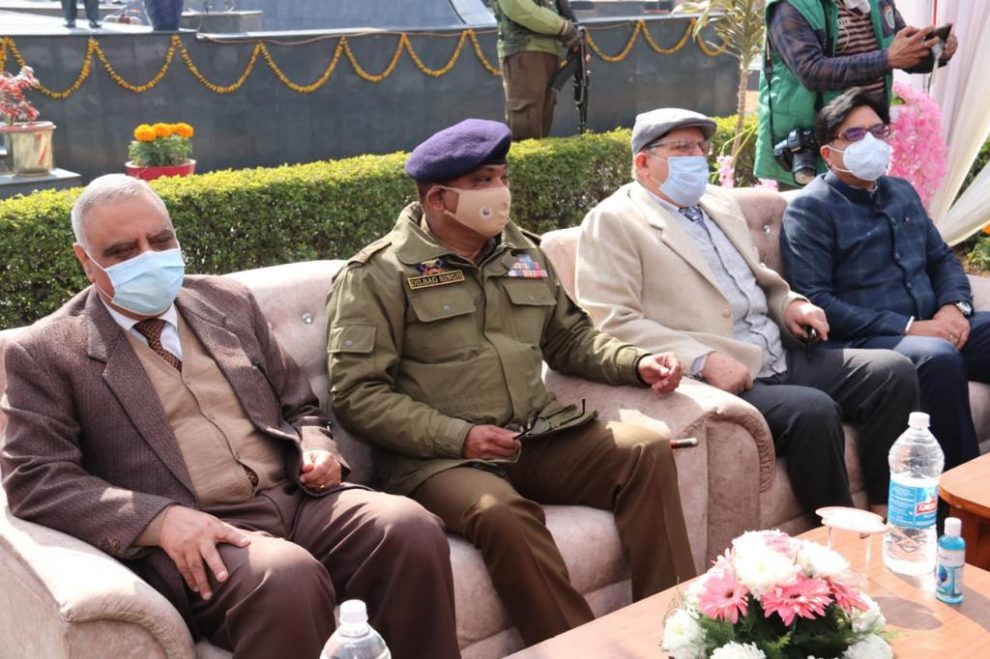 Jammu, 29 January: To pay tribute to the martyrs of Jammu and Kashmir Police and honour the families of martyrs a felicitation programme was organised by the Rotary Club Jammu Tawi, prominent citizens of Jammu in association with Police Wives Welfare Association (PWWA) at the Police Martyrs Memorial Rail Head here today. The Director General of Police J&K Shri Dilbag Singh was the Chief Guest on the occasion.

On the onset of the programme a floral tribute was paid by the DGP, ADGsP, PWWA members, IGsP, retired senior Police officers, prominent citizens of the Jammu, members of the Rotary Club Jammu,PWWA members and by the families of martyrs to the J&K Police martyrs.

On this occasion, while thanking the district Jammu Rotary Club members and PWWA the DGP said that organizing today’s programme and facilitating the families of martyrs is very noble.This programme organised by any Civil Society in the memory of JKP martyrs is highly appreciable, he added. He said that PWWA is the soul of Jammu Kashmir Police Parivar for organizing such programmes for the martyrs. He said that on various occasions especially on 21st October every year martyrs are remembered and tributes are paid to them for their sacrifices. He said that it feels great when civil societies arrange programmes in respect of martyrs as it boosts the positive energy of the forces.

The DGP said that the history of Jammu Kashmir Police will be written in golden letters. He said that the martyrdom achieved by the officers and jawans of JKP personnel during the last three decades for ensuring peace and security of the people of Jammu and Kashmir speaks volumes of courage, valour and sacrifices of JKP. He said that we are proud to be a part of such a brave police force who are sacrificing their lives for the integrity of the nation. He said that the martyrdom of our personnel is being recognized at the national level and for which this year on the Republic Day 04 JKP personnel have been awarded the Shurya Chakra,besides 52 police medals for Gallantry. He said that for the safety of our people, society and nation each member of the police force is ready to sacrifice his/her life.

The DGP said that JK Police personnel are devoted and committed in providing peaceful environment to its people. He said that I am feeling proud that Hon’ble Prime Minister Shri Narendra Modi, Hon’ble Home Minister Shri Amit Shah, Hon’ble Lt. Governor of J&K Shri Manoj Sinha have acknowledged the sacrifices and dedication of JKP time and again.

On the occasion, former DGsP of J&K Police Shri Kuldeep Khoda and Dr. Ashok Bhan thanked the district Jammu Rotary Club and PWWA for organizing the programme. They encouraged the civil societies to organise more such programmes which in turn will boost the energy of Jammu and Kashmir Police personnel.

In the beginning of the programme retired IGP Shri Ashok Gupta and Dr Dushyant Choudhary welcomed the chief guest, senior police officers, retired senior police officers, families of martyrs, prominent citizens of Jammu and other district Rotary club members. They gave detailed briefing on the need of organizing such programme and deliberated on various steps which are being taken by the Rotary Club Jammu Tawi for felicitating the families of martyrs.

The organizers of the function distributed gifts to the NoKs of the martyred families as a token of their gratitude. They assured their help and assistance, if any, required.