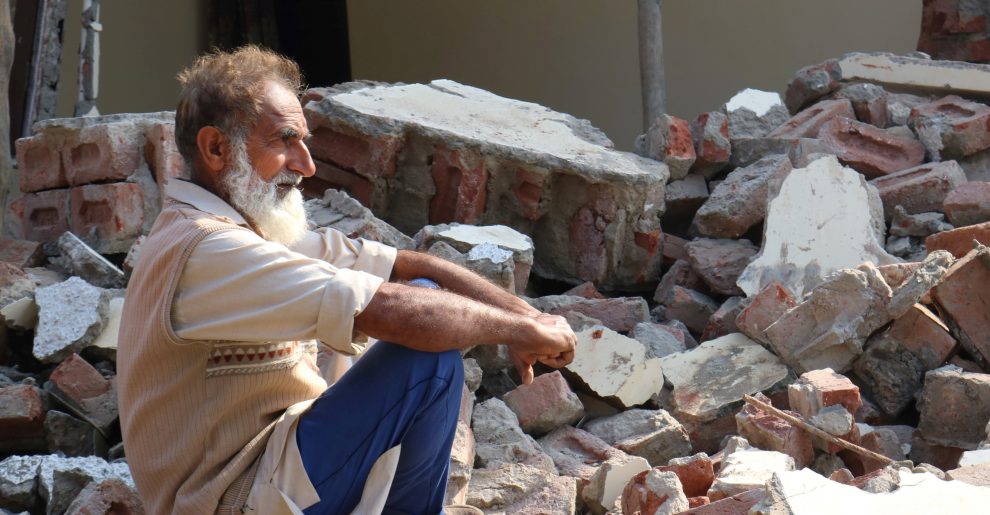 Lateef U Zaman Deva
Add Comment
This calls for a thorough inquiry right from the stage the concept about the use of land from the area has been perceived & the manner in which executed leading to paper allotments of plots in undeveloped area not in physical possession of JDA and also identification of ineligible persons who have been beneficiaries of the scheme governed under LB-6&7 & S432.

The slugfest between the votaries of tribals and the champions of the Jammu Development Authority(JDA) is reiteration of ‘’divisive narratives ’’ prevalent all over the cow regions of the country with the result the core issues go unappreciated on merits.

However the gratifying feature of wholehearted support extended by the natives of Roup Nagar, irrespective of faith, to the cause of tribals has rekindled the hope for dispassionate approach to the uncalled for dismantling of structures by JDA.

The aggrieved tribal homestead dwellers claim the possession on the State land dating back to centuries together but actually brought on revenue records in 1978 with retrospective effect from 1947 by dint of orders passed on the Mutation by the competent authority under J&K Land Revenue Act( Standing order 23-A) and these orders with the afflux of time have attained finality in absence of challenge in Appeals/ Revisions by State or others, merits & demerits of the Tehsildar’s orders apart.

The occupants of State land, not necessarily in cultivating possession, have been conferred with tenancy followed by ownership rights from time to time during Maharaja Hari Singh’s reign. Reference can be made to council orders of 1939, 1940, 1941 & 1944.

After 1947 the dispensation was again made available under Govtt orders LB-6 /C of 1958 & LB-7/C of 1958 both Dated 05.06.1958 for grant of tenancy rights to the occupants subject to fulfilment of certain conditions primarily the one about possession of State land, including the land that vested in the State under J&K Big landed Estates Abolition Act 1950, in kharif 1957-58 & continued thereafter.

Armed with credible reports about corruption accompanied with allegations of manipulations in entries of Khasra Girdawari of reference crop period, the beneficiaries being from prominent sections of society born either after 1957 or having been infants during the cut off period together with ordinary place of residence far away from the estate concerned & due to socio-economic status hired labour always engaged for farming purposes by such persons; the Govtt vide order No 1158 of 1989 Dated 22.06.1989 again laid down an embargo on attestation of mutations till further orders which is claimed to have been set aside by HHC ( Jammu Wing) during the year 2004.

The dispensation of ‘’rights accrued and vested’’ continues to be in force and it is only the attestation of mutations which has been needlessly stopped unless supported by orders passed after 04/ 2004 by the competent Authority.

During the period of non-attestation of mutations in the land acquisitions proceedings(mostly Pertaining to Salal Dam) the interested persons in occupation of state land, otherwise eligible for rights enunciated in Govtt orders of 1958 &.1966, were denied compensation by the Collectors which ultimately came before the Hon’ble JKHC in a number of OWPs .

The crux of decisions invariably handed down command that the rights accrued have not been affected in any manner whatsoever by non passing of orders on the Mutations being simply an act of bringing the position on the records . The judgements were implemented by the State on the strength of opinion of the State law Deptt.

On the basis of law as interpreted by the Hon’ble Court & implemented by the State the aggrieved tribals are also deemed to have’’ accrued and vested tenancy and ownership rights’’ unless the conditions prescribed in the Govtt orders have not been complied with which is a matter to be determined on case to case basis by the authority concerned. The ‘’accrued & vested rights’’ can’t be abridged or denied except in the event of application of disqualifications prescribed in the relevant orders for conferment of tenancy and ownership rights.
During 1973 State land, except subsisting leases of Nazool, fall1ng within a radius of 13 Kms from Purani Mandi Jammu was transferred to the Jammu development authority by the State Govtt & takeover from Revenue Deptt was not physical but documentary only.

The actual hand over and take over would have unfolded the genuine & legally enforceable encumbrances wherever subsisting. The JDA is charged with responsibility for urban planning and development in local area in conformity with the Master plans.

One of the activities pertain to development of housing colonies which broadly pre-supposes in a place like Roup Nagar the reclaiming & development of land followed by earmarking of plots and other areas for general services etc. Without admittedly being in physical possession of land the JDA has not developed the area into a housing coloney let alone delineation of individual plots. By creating 3rd party interests on land not in its physical possession the JDA has stooped low in fulfillment of seemingly malicious designs.

The settled habitations were axed for making room for others for same purpose- residential & by this modus operandi sheltered became overnight houseless for none of their faults but owing to apathy of Administration propelled by totally wrong appreciation of both law & facts related to the case.

This calls for a thorough inquiry right from the stage the concept about the use of land from the area has been perceived & the manner in which executed leading to paper allotments of plots in undeveloped area not in physical possession of JDA and also identification of ineligible persons who have been beneficiaries of the scheme governed under LB-6&7 & S432.

This community, despite facing virtual holocaust in 1947 & isolation thereafter, has been in the forefront in defending the national interests & doesn’t deserve to be left unheard paving the way for adversaries to exploit them. The suppression of factual position is the casualty in this case which need be unravelled instead of callous indifference.

The author is former chairman of the Jammu and Kashmir Public Service Commission.