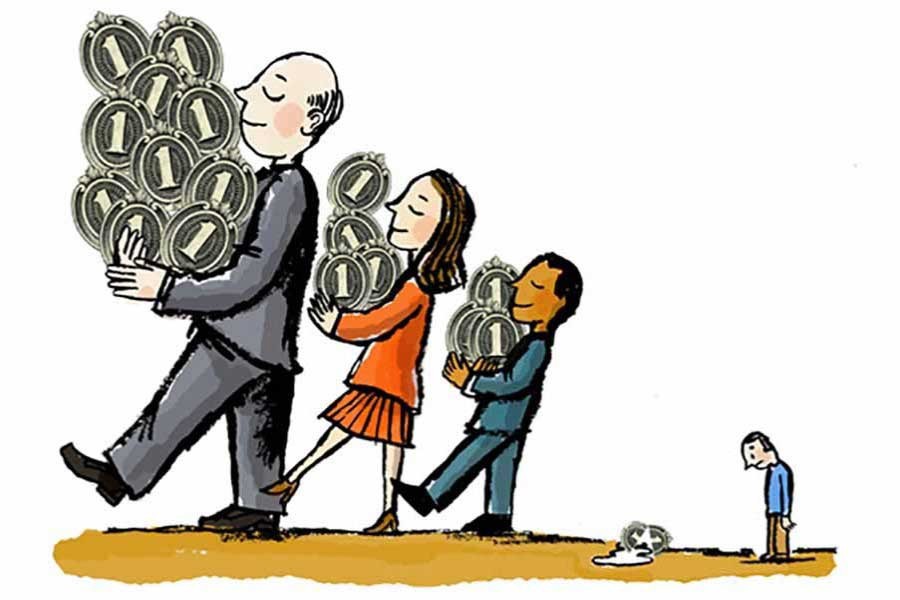 India added one billionaire every 10 days in 2020 amid the pandemic. This was made possible by rising stock valuation, which increased the number of worldwide billionaires by 412 to 3228. There are now 209 Indian origin billionaires of which 177 are Indian residents. The total list, which continues to be topped by Mukesh Ambani and Gautam Adani, has 50 fresh additions. In fact, Asia has, for the first time, in perhaps hundreds of years, more billionaires than the rest of the world combined, according to a recent survey.

The rise in wealth of the rich has been on the back of rise in value of financial assets – shareholdings in the companies they own. The Nasdaq was up 42 per cent last year followed by China’s Shenzhen (40 per cent), Sensex (23.2 per cent) and Japan’s Nikkei (22.9 per cent). China also added 256 new billionaires to become the first country in the world to top 1000 known dollar billionaires with 1056, more than the combined total of the next three countries of the US, India and Germany.

As far as India is concerned, the development once again confirms the fact that the rich have not been affected, in the slightest way, due to the COVID-19 pandemic. However, it is the poor and the economically weaker sections who have suffered immensely, from April onwards till at least December last year. This includes small traders, migrant workers and all those working in the unorganised sector as also various categories of hawkers. Even a large section of those in the formal sector were affected at least for 7-8 months as their units remained partly closed.

The situation has been improving since this year though demand in most sectors is yet to pick up. The lack of demand is testimony to the fact that a large segment of the population – say around 70 per cent, if not more – have lost their purchasing power, which are the after effects of the pandemic. The recovery that we see and read in the media is concentrated to around 7-8 of the population who comprise the upper sections of the middle sections.

Delving into the problem, one finds that concentration of wealth in a few hands is nothing new but the amount of money in the hands of the ultra rich – even the rich – has been phenomenal in the last few years. This has resulted in big business exerting a great influence on political leaders and being near the corridors of power. Obviously, the political leadership, it is no secret, is known to lean towards these and help their business to the extent possible.

In doing so, the planning strategy of the country is so geared to help the upper echelons of society, thereby neglecting the poor and the impoverished. One aspect of this is the introduction of new agricultural laws which has evoked massive protests among farmers, both in India and abroad. The other distressing scenario is with labour laws which are definitely not intended to upgrade conditions of grass-root workers, who have virtually no social security.

If one argued that in an emerging economy like India, this has to be accepted, the question arises how pathetic is the scenario regarding the food consumption of the poor. A recent national survey found that over 98 per cent of India’s adults eat inadequate levels of fruits and vegetables, thereby increasing the risk for non-communicable diseases. It found that this category of people aged between 18 and 69 years eat less than the recommended 400 gm fruit or vegetables a day.

The lack of  an adequate and balanced diet has led to an increase in illness and premature deaths from non-communicable diseases such as cardiovascular disorders, diabetes or cancers in the country over the past two decades and accounted for 6.1 million or about 65 per cent of India’s deaths in 2019. In fact, as the survey revealed that the Indian diet continued to be dominated by carbohydrates, roots and tubers.

According to Dr. Prashant Mathur, head of the Indian Council of Medical Research National Centre for Disease Informatics & Research, Bangalore and the study’s principal investigator, the lack of affordability as also lack of awareness and understanding of diseases may have been the reason to consume more vegetables and fruits. Meanwhile, FAO recently stated in a report that 690 million people were hungry in 2019 but the number was expected to rise sharply during and post COVID-19, hinting at the large population of India.

This brings us to the formulation that all talk of India’s emergence as a global power is made keeping in view the rich and the middle class which are destined to emerge richer and stronger in the coming years. But what would happen if the neo-capitalist strategy of appeasing and helping the upper echelons of society are continuously followed?

The most challenging questions that emerge are obviously related to finding employment or self-employment for the growing youth force, specially the educated ones. Recently over 5 million youths stormed Twitter with the hash tag ‘Modi job do’ (Modi give us jobs). Avinash Kumar of the Centre for Labour Studies of JNU University stated that out of over 100 million regular employment opportunities in 2018, the share of public employment had fallen below 20 per cent. Government jobs are decreasing year after year; yet they remain popular among the youth because of security. Studies have shown that job growth declined steadily between 2011 and 2018 compared to the previous seven years and the situation in the next two years is more pitiable.

As has been pointed out again and again, the induction of technology and mechanisation has steadily reduced the scope of employment. Due to reduce costs and achieve economies of scale, this strategy is being followed. While in Western countries, utilisation of labour is not a big problem, it is not the same here in India, where unemployment and underemployment has been increasing at a rapid pace. Moreover, the government has no clear-cut policy of encouraging labour intensive industries, on the one hand, while allowing private sector to reduce labour costs at its own free will, on the other.

Thus in the coming years, there is virtually no possibility of unemployment being addressed though the government promised 2 crore jobs a year without any concrete plan on how to fulfil it. This would obviously increase disparity and a large population would be deprived in all possible ways while the rich would continue to amass wealth. Another aspect of this deprivation may lead to social unrest and violence as the rich in this country is not at all benevolent.

What actually will happen if this trend continues is indeed difficult to apprehend. But social analysts are clear in pointing out that if this carries on, the present policies of the government may not resolve the impending socio-economic crisis, which is staring the country in the face.