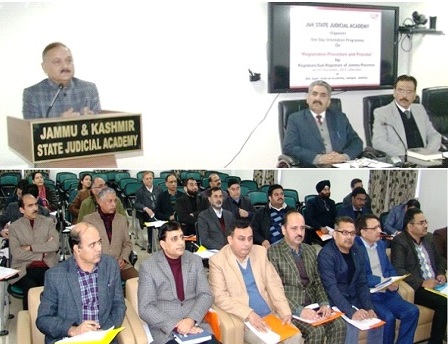 JAMMU, DECEMBER 21: The Jammu and Kashmir State Judicial Academy (JKSJA) today organised one day orientation programme for all Registrars/Sub-Registrars of Jammu Province on the topic “Registration Procedure and Process”.

Financial Commissioner Revenue Dr. Pawan Kotwal, with powers of Inspector General of Registration, inaugurated the programme, which is first in the series of training programmes to be organised by the Judicial Academy.

In his inaugural address, Dr. Kotwal highlighted the need to train the officers of the government, who now have been vested with the duties of Registrars and Sub-Registrars, under the provisions of the Registration Act. He also stressed on the need to learn from the experience of the Judicial Officers, who were earlier assigned with the registration work.

He said that government is in the process of creating separate infrastructure and manpower in the Department of Registration, for which efforts are being made to expedite the process.

“It is the need of the hour to educate the Registering Officers to ensure smooth and hassle free work of registration of documents,” he said. He exhorted upon the Registering Officers to work tirelessly to facilitate the general public in the matter of registration of documents. He also gave an overview of the ongoing process of digitisation of Revenue Record to streamline the functioning of the Revenue Department.

The resource persons, after giving an overview and salient features of the Registration Act and the incidental matters, elaborated on the powers of the Registering Officers and the procedure required to be followed by them in registration of documents.

During the interaction sessions, the Registering Officers cleared their doubts as to various matters falling in the domain of registration of documents.