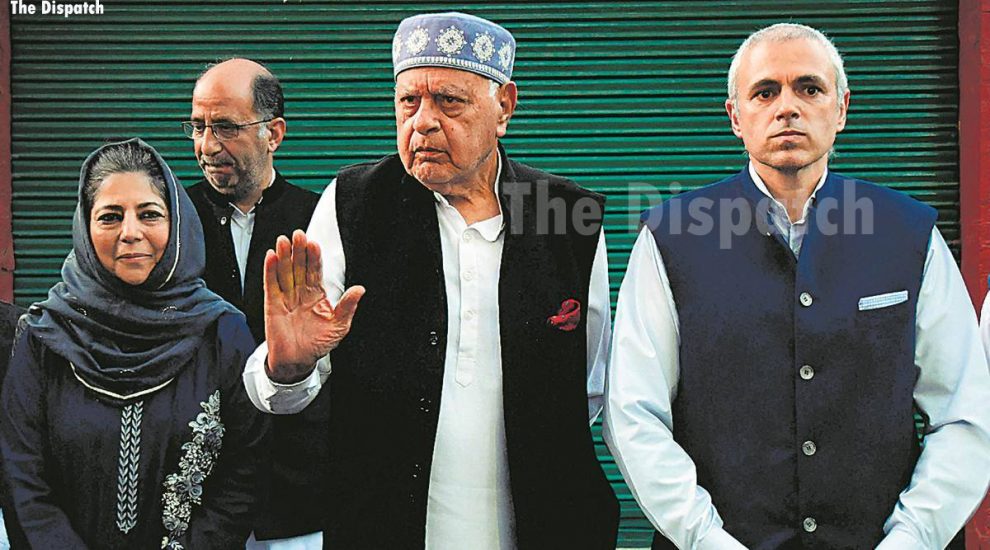 Last few weeks in Kashmir valley have been ripe with floating of several conspiracy theories that arose due to unusual security force deployment in Kashmir valley, bringing back memories of the events that preceded the abrogation of Article 370 & Article 35A of Indian constitution. There were rumors of the grant of formal statehood only to Jammu region and continuation of the UT status for Kashmir valley. Other rumors suggested carving out of a new administrative region after merger of South Kashmir with Jammu and so on. But in the end, all these rumors turned out to be exactly what they were – rumors.

To begin with, the period after the abrogation of Article 370 and 35a of the constitution of India has not exactly been one of political stagnation. The twin regions of Jammu & Kashmir valley, both actually saw a mini-assembly like elections in the form of DDC elections for which people turned out in large numbers even in militancy affected South Kashmir and where elections were indirectly fought on party symbols. In this sense, the union territory has seen electoral political activity at par with state assembly elections that took place in West Bengal or the Panchayat elections that took place in Uttar Pradesh. The DDC elections were in essence a testing ground to examine several political maneuvers that are to decide the restart of the political activity in the UT of Jammu and Kashmir.

The first and foremost thing that DDC elections showed was that people of the union territory of Jammu & Kashmir have not lost interest in electoral politics. Many political analysts and so called “Kashmir specialists” had predicted that people of Kashmir valley would no longer trust any future elections that were to be held under the constitution of India after the abrogation of Article 370 and 35A of the Constitution of India. However, people of Jammu and Kashmir including those in Kashmir valley surprised every one by participating in large number in DDC elections and thus proving all political analysts wrong. It is however important to mention here that these DDC elections were not in any form a referendum or approval of the people of Jammu & Kashmir for the abrogation of Article 370 and 35A of the Constitution of India. These DDC elections were fought on sub local issues like that of water, electricity and road. The elections however allowed the UT administration and the policy makers in Delhi to gauge the mood of the people of Jammu & Kashmir, who made it very clear that they wanted the resolution of their issues through peaceful and democratic means.

This has clearly led to a change in the approach of both UT administration as well as policy makers in Delhi towards the Kashmir centric parties. According to unconfirmed reports, the Central Government and UT administration is mulling inviting J&K’s major political parties including the National conference and PDP for discussions on delimitation process, a step, which is precursor to the holding of fresh elections in Jammu and Kashmir. The only question that remains is whether the “Gupkar Alliance” will meet the central Government and the UT administration as a single unit or will hold talks individually. There are also reports that the restoration of the statehood of the Jammu and Kashmir might also be on the table for discussion or the Central Government may postpone it and allow political parties to fight over it as an election issue amongst the people of Jammu and Kashmir, given the fact that the restoration of the statehood is something, which is not only desired by the people of Kashmir valley, but the same has also been demanded by the Jammu unit of the BJP.

Further there are speculations that the new Biden Administration of the United States is also interested in and is urging the Central Government to restart the electoral process in Jammu and Kashmir as soon as possible. Further the Modi Government is also believed to be interested in finishing the process of changing the political landscape of Jammu and Kashmir, which it began on August 5, 2019, when it abrogated Article 370 and 35A of the constitution of India and bifurcated the state and demoted the status of J&K to a UT. It is believed that the central government wants to now complete the political process by conducting the elections after delimitation and handing over the power to the newly elected regime.

All in all, it is clear that there is a change in the air and the restart of the political process is on the cards in Jammu and Kashmir, which will augur well for the people of the UT, who have been battering economic devastation, political instability and ill effects of coronavirus pandemic. The new political setup will kickstart the necessary legislative and development process in a state which has been run by officialdom for past 2 years and that will bring a positive change in the lives of the people of Jammu & Kashmir.

The author is a Young Political Leader and is State Secretary of People’s Democratic Front.