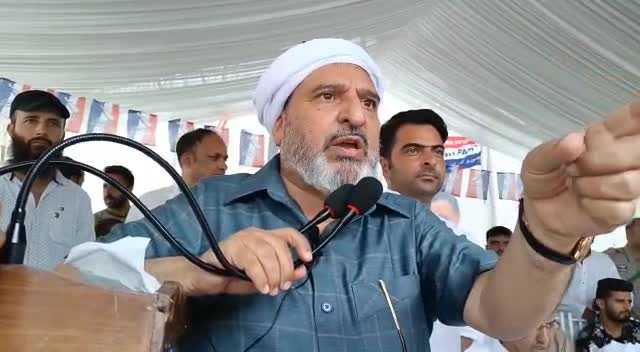 Bukhari was addressing a huge party rally at Keller Block in south Kashmir’s Shopian district on Tuesday, where the locals and his party supporters accorded him a rousing reception on his arrival.

According to a press statement issued here, Syed Altaf Bukhari urged the union government to restore statehood to J&K before the assembly elections are held here. He said, “Since the Union Government has committed that it will restore the statehood to J&K, it will be a great initiative if the commitment is fulfilled before the forthcoming elections.”

“Statehood is something that the J&K’s people feel a longing for since it was snatched away on August 5, in 2019.” He added.

Bukhari also demanded that the young Kashmiris who are currently behind the bars should be given a chance to get back into the national mainstream.

He said, “Several youngsters from this beautiful place have been in jails for quite a long time. The Apni Party wants that these youngsters should be given an opportunity to get into the fold of the mainstream. We cannot overlook the fact that they are our own kids, thus, the Apni Party would suggest that the government should form a committee to look into the cases of these young people and see if they are willing to get a chance for a peaceful life.”

Talking about the protracted political exploitation of the Shopian people by the traditional political parties, Bukhari said, “Shopian is one of the few places in whole Jammu and Kashmir that the Almighty has bestowed with tremendous natural resources and full potential for enormous economic growth. But, the traditional political parties, who ruled J&K for years and decades never tried to harness the potential of this place that could have brought prosperity to the people of Shopian. I assure you that we will change the scenario of this district for the better if the Apni Party is elected in the forthcoming elections.”

He added, “Shopian has great potential in the horticulture and tourism sectors. The apple from Shopian is much-admired for its best quality. We can improve the production and fruit quality further by deploying the latest scientific methods, and by deploying lift irrigation to the Karewa (Wodder) areas of the district. Similarly, we can identify and develop potential tourist sites here.”

Apni Party President, while explaining his party’s vision for J&K, said, “Our policy is very clear. We want sustained peace, durable prosperity and development of Jammu and Kashmir, and economic empowerment of its people. God has bestowed us with the kind of natural resources and potential that many places in the country can only dream of. We just need to harness our potential with scientific principles. Unlike the traditional political parties, the Apni Party is focused on our policy of peace, prosperity, and development in J&K.”

While talking about Apni Party’s post-August 2019 role, Syed Altaf Bukhari said, “After the occurrences of August 5, 2019, everybody was skeptical about the future occurrences. People feared that they would be pushed to the wall further. But the Apni Party took an unpopular, yet greatly significant initiative of meeting the Prime Minister and Home Minister. We ensured that our land and jobs are secure. We made the Prime Minister and Home Minister announce that there will be no demographic change in Jammu and Kashmir. This was our contribution at the time of crisis, and we feel proud of the initiatives that we have taken post-August 2019 to protect the rights of the people.”