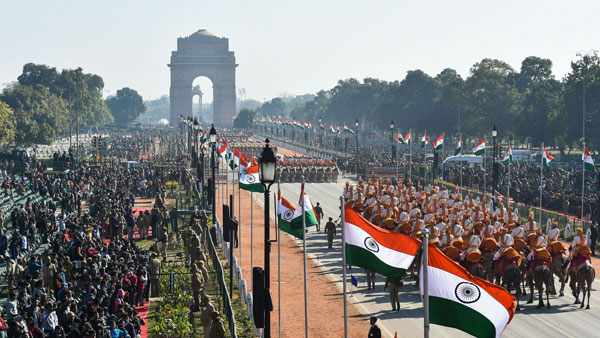 How does one feel on Republic day week? Rather how is one supposed to feel? Patriotic?  Puffed up in self-esteem? Pride in Mera Bharat Mahan? Happy it’s a holiday? That, my dear, compatriots is what 26 January boils down to. Just another chutti to do your own thing!  Nothing more, nothing less. Seventy one years’ which embody the joy and tragedy of India!

The irony could not be more profound after the gloom of a depressing 2020 due to Covid 19 pandemic. Under a heavy cloak of security our leaders go through the same stereotype motions mechanically. President Kovind unfurls the tricolour at Rajpath followed by a Parade. Yet, amidst the curtailed pomp and show pageantry lurked the shadow of the continuing farmers protest on the outskirts of Delhi and the 1lakh tractors rally.

True, our kisans may have genuine grouses and till date the Government has shown good faith by holding ten rounds of talks with 40 farm union leaders offering many amendments to find a “logical solution” to the three contentious farm laws. The Supreme Court has set-up a panel of experts to break the logjam which farmers have refused to acknowledge. In a democracy, laws may be flawed as the Government is not God but to continue an andolan is not the way to make the Government see reason. The ball is now in the farmers’ court.

With everything beginning and ending with our polity, a distraught India continues to search for her soul under the increasing onslaught of rising prices, unemployment, intolerance, cultural terrorism, casteism, growing majority appeasement read Saffron Parivar’s ghar vapsi programmes, love jihad and  beef ban. Topped by a mundane performance, more talk than action an angry and restive janata demands answers and yearns for change.

Alongside, there is political disquiet over Modi’s failure to curb his rabid Hindutva brigands whereby India is once again caught up in a battle royale between the Gods. Alas, ishq-mohabat-shaadi cutting across caste and religious boundaries inter-meshed with forced conversions are churning the political cauldron resulting in an unholy clash between the ‘holier than thou’ with seven Saffron States: UP, MP, Haryana, Karnataka, Gujarat, Bihar and Assam enacting strict law against ‘LJ’.

Yet, Modi remains the tallest leader sans an opponent with people rooting for him as decisive, one who is determined to build a strong prosperous future for them.  Certainly, people might be disappointed in the Government’s overall governance but are not overtly disillusioned with it. Thanks to the TINA (there is no alternative) factor and a scattered and weak Opposition pulling in different directions.

With the Congress in suspended animation due to internal strife between the Gandhis’ and the “game changers”, regional leaders like TMC’s Mamata, NCP’s Pawar, DMK’s Stalin, TRS’s Rao with disparate aims and agendas are all are vying for the same top slot. They would do well to learn that only unity can defeat the BJP.

Besides, the Party and its Government can derive comfort from holding District Council elections post abrogation of Article 370 in Kashmir, beginning construction of Ayodhya temple, and dealing with the political aakrosh over the CAA and NRC. Only the Uniform Civil Code is left of the BJP-RSS nucleus agenda and a Bill to regulate population is on the anvil.

However, the country is in the throes of an economic divide, bottomless potholes and subterranean fissures in the rotting fabric of our cities, the Central and State Governments’ apathy and incompetence towards its 80% workforce. Millions have lost their jobs, many small and medium-sized companies went bankrupt add to this hunger, desolation and depression, the perfect recipe for disaster.

Add to this, the pandemic exposed India’s economic distress. It posted its steepest ever economic growth slump to register a sharp quarterly growth slump of 15-25%, just years after it earned the tag of the fastest-growing economy in the world. Even if pent-up demand leads to a recovery after the pandemic eases, deep structural issues like high public debt are expected to constrain India’s GDP growth for years to come. there is a plunge in domestic consumption, manufacturing, construction, real estate, weakening of industrial production, slump in exports and imports and a mess in the banking and financial sectors, dissatisfaction in rural belt, urban apathy and angry youth for Government’s inability to generate jobs alongside communal polarization and erosion in its vote-share which has not paid electoral dividends.

On the social front things are depressing. Seven decades post Independence, after spending trillions on education, health and food, 70% people continue to be hungry, illiterate, unskilled and bereft of basic medical care. Increasingly, we are getting more casteist and communal whereby a distraught India is searching for her soul under the increasing onslaught of intolerance and criminalization.

Further, there is “huge levels of deprivation” and endemic food shortages from over half a dozen States. Malnourished children in tatters begging for a few morsels and starvation deaths are heart-wrenching sight across the country. Ironically, while FCI’s granaries are brimming with surplus grain roadblocks underscore a dismal lack of coordination between the Centre and States to speedily transport food to those in dire need. If things are not resolved soon, food riots could  become a reality. The enforced incarceration has intensified levels of anxiety, frustration, and aggression all round.

When it comes to women safety nothing seems to have changed. From the 16 December 2012 Nirbhaya gang-rape case which ‘shocked the conscience of the nation’ and took eight long years for the culprits to pay for their crime to the 29 September Hathras case where a 19 year old Dalit teen was gang raped by four upper caste men, stripped and strangulated, her spinal cord damaged paralyzing her and tongue cut resulting in death.

Tragically, nobody has time for the aam aadmi’s growing disillusionment with the system which explodes in rage. Turn to any mohalla, district or State, the story is mournfully the same. Resulting in more and more people taking law into their own hands and borne out by the increasing rioting, looting and burning of buses. Capital Delhi is replete with gory tales of road rage resulting in murders. The system has become so sick that women today are being raped in crowded trains with co-passengers as mute spectators. Sporadically converting the country into andher nagri.

Worse, none have time for the sick and needy. Appallingly, there is only one allopathic doctor per 10,189 people, only one hospital bed per 2046 persons and one State-run hospital per 90,343 people and one million allopathic doctors for 1.3 billion people of which only 10% work in the public health sector. Three thousand children die of malnutrition every day, 14.9% of our population is undernourished and nearly one million die annually due to scarce healthcare facilities while 19 crore people are compelled to sleep on empty stomachs. All in all, Republic Day is a time for honest soul searching. Time has come for our netas to turn a new page and invest in its citizens genuinely, people who make this nation, their education, health, jobs and in their future. Will they be able to ensure speedy development at the grassroots through a decentralized administration responsive to the rising expectations and aspirations of its people in accordance with a mature and meaningful democracy? Specially, as the system faces its greatest-ever crisis even as our people are urged to take the Covid vaccine and revel in the “feel-good factor” waiting for ache din to arrive. We Indians deserve a lot better.