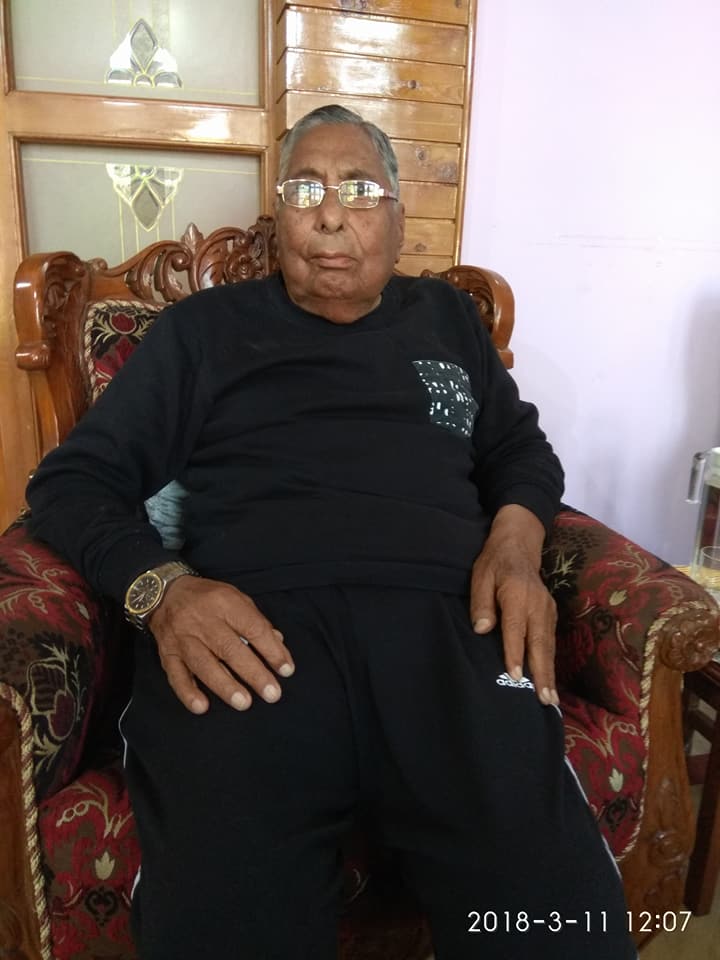 Ravinder Nath Kohli, a passionate human being and a cultural enthusiast died at the age of 89 years on 2nd Dec 2020 at a Chandigarh hospital. Death is a eternal reality but then some deaths create a void, a loss that gets etched in memory. Dedicated to pursue his passion of exploring history and heritage, he lived life on his own terms and looked for much more than mundane affairs and business pursuits in all that he did. He ran a substantial timber and financial enterprise but this did  not detract him from being a great collector of historically important coins, stamps, and manuscripts. The transactions of trade have a history and detailing of their own and Kohli Sb had a100 year-long unbroken thread of these in the shape of hundies, stamp papers, sale deeds going back to the 30s and 40s of the last century. I met him when he had serious health issues. However, in every meeting, he would come out as someone who did not allow these to shadow his passion. Every meeting was an event of its own, new revelations, great narration, a story of the background and legends in the manuscripts, stamps, and coins.

He built and mined a treasure trove out of Jammu, a city that does not have many footprints of this nature to follow. His collection amply leaves behind an example of human endeavor and passion at its best.  He left behind a unique and rare collection of stamps, Stamp paper, documents, and letters from the 19th century onwards as his proud possession. Kohli saheb belonged to a family of timber merchants   whose immediate ancestors had a high and responsible position in the Dogra Maharaja’s hierarchy.  His elders were hereditary Devdi Bardhars of the palace, a position that demanded trust and discipline. After independence, the family run business expanded substantially.

Though Kohli sahib shared the family business and fortunes, he had other ideas about his life and the world. This led him to the excruciating search for rare coins , stamps and manuscripts.  Besides the urge of the collector, it involves money and investments and this came in handy for a prosperous business man like him. In the process he built a philatelic collection ranging from the British Raj, Indian states, almost all counties who have printed or overwritten on the British stamps. I was privileged to spent some time, mostly forenoons couple of times, to going through this amazing treasure, certainly beyond imagination. I selfishly wanted to stay longer but conscious of his state of health always thought it proper to repeat the sessions, though his enthusiasm and urge to bring the stories of his past and his passion to life overtook these concerns.

His family tells me that he would get newer energy when a visitor would take interest in his work and engage in valued conversation related to his passion. The richest collection is of the Dogra period service and revenue stamps based on which a substantial history and growth of Dogra principality can be reconstructed and this awaits the attention of scholars.

Surprises over surprises, a few examples, state of Bahawalpur stamp carries their insignia with writings ‘Mamlikat khudadad, Bahawalpur’. Some Nawabs imagined themselves as ‘rulers of the country bestowed by the Almighty’ so must have been some other Rajas. This fact comes to light through their stamps and coins which  become brick and mortar for  knowing them and their role in history.  Never heard that besides Rupee, Anna or paisa, Faridkote, Punjab  also had fuloos, as currency. Fuloos is Arabic name of coin that has been in circulation in those territories only. In the stamps on various modes of mail distribution over centuries, jagir Bhadarwah and Poonch state would use State stamps but assert their authority and autonomy by overwriting the names of their jagir on these stamps.  Presumably the Dogra State  did not mind this liberty as long as  they dutifully paid their Kharaj , the tribute to the Maharaja.  A postcard giving the time of posting  in Lahore on 4th august at 8.50 AM and received at Amira kadal Srinagar on 6th august at 6 PM hundred years back is still a tall order for the same distance even with air mail.  It was  a great surprise to know that same day delivery of letters in 1914 from Shah Almi gate to Mastgarh Jammu was in force and this seems to have been quite popular. I haven’t heard of an address, ShahAlmi gate in Jammu. It is a Persian name that translates to‘ King of the World gate’

This collection is ideally in need of a academic research project. We need to offer our  naman and pranam to the great services  rendered to the culture and history of the Riyasat by this  grand old man. Given his other  engaging temporal pursuits, he has done in life that would take others more than one span. We need to celebrate such lives and give them the honor and recognition they deserve.

It was an education and learning experience to spend time in his company. Above all a  generously hospitable person and a fine human  being representing the lost generation of Dogras who were humble, friendly, and caring, a mould rare and vanished now. Rest in peace Sir and you have left materials and stories around you that will last for generations.