Maharaja Hari Singh, ((23 September 1895 – 26 April 1961) was the last Dogra ruler of a dynasty which did the improbable task of holding together the state for a century. The Dogras created the state of Jammu and Kashmir which included Ladakh, Gilgit-Baltistan, Muzaffarabad-Mirpur, Aksai Chin and Saksham Valley with feudatories like Hunza and Nagar.

It was one of the biggest kingdoms enjoying autonomy and internal sovereignty till 1947. Not only was the state multicultural, multilinguistic and multireligious, it’s far reaching frontiers were an evidence of its formidable military prowess, unparalleled in history.

Maharaja Hari Singh ascended to the throne in 1925. His reign was marked by complex political events, conspiracies, and sweeping changes which had the power to completely overwhelm a mere mortal. Despite his inner turmoil he stood tall and stoically behind his kingdom, while taking some of the toughest decisions that no other king had to before him.

The fact that he maintained a dignified silence in the face of vicious slanderous campaigns against him so that his beloved Jammu and Kashmir could get a fair chance in an independent India stands proof of both his love for his state and his nationalist nature. His birth anniversary allows us the opportunity to celebrate a modern king who was a progressive thinker and social reformer.

A Hindu king who ruled over a Muslim majority state is how he is often limitedly described, but it is only right in the context of current events to see how he rose above the communal stereotyping and stood by his words: “Justice is my religion” – his first statement after assuming the high office in 1925.

A man not keen on religious rituals, he did not discriminate between his Hindu and Muslim subjects. Indifferent to the opinions of his fellow co-religionists, he gave importance only to meritocracy and appointed the best of Muslims in his court, administration and the army.

Before Sheikh Abdullah’s virulent anti-Dogra campaign and many an unholy nexus that changed the winds, the army was a fine blend of Dogras, Sikhs, Gorkhas, Pathans, Hindu and Muslim Rajputs from Mirpur and Poonch, many of whom are now in Pakistan-occupied Jammu and Kashmir and still swear loyalty to the Dogra dynasty.

Khusrau Jung, who belonged to the royal family of Hyderabad in the Deccan, was in the Maharaja’s employment. Malik and Nur Muhammad Khan from Baluchistan were his ADCs. Maharaja Hari Singh’s head cook and head waiter were also Muslims.

His secretary was Abdul Qaiyyum Khan and one of his close friends was Sardar Abdul Rahman Effendi, an Afghan refugee related to King Amanullah. In his kitchens only halal meat was cooked so that Muslims could eat as well. He was the first Maharaja of Jammu who went to the mosque, standing respectfully throughout the prayer.

After the prayer, he offered the Imam who had led the prayers, Rs 500 and a pashmina robe. His progressive views on religion caused much displeasure to his Hindu subjects resulting in rumours that the Maharaja had converted to Islam on the sly. He remained indifferent to all such talk.

Malika Pukhraj, the legendary songstress and one of the gems of Maharaja’s durbar was not only appointed as a court singer but it was an example of the Maharaja’s progressive views on religion that he had her, a Muslim girl singing bhajans in the Mandi Palace during early mornings alongside shloka-chanting Pandits.

“Faiths should not be so weak that they be threatened by touch. Everyone’s god is the same and the differences have been fabricated by us” was something he often said. When overpowering ambitions of some individuals, coupled with British interference lead to political mischief, resulting in Hindu-Muslim riots, the Maharaja was shocked and deeply hurt.

Malika, in her autobiography, writes that he said, “I have never differentiated between the Hindus and Muslims for the two communities are like my two eyes”, expressing his anguish.

He was a king who shattered the glass ceiling in more ways than one. He passed legislation against many a social evil unlike his counterparts in rest of the subcontinent. He abolished untouchability and sacked the priest of Raghunathan temple when he found that the priest had refused entry to the lower castes despite his explicit orders.

He opened all public schools, colleges and wells to “untouchables” in 1931. A social reformer who was both ahead of his times, Maharaja Hari Singh was courageous and was a champion of women’s emancipation. Maharaja Hari Singh stopped the rampant practice of child marriage and actively promoted widow remarriage. He made trafficking and organised prostitution illegal. He was also successful in rooting out the practice of sati.

The Maharaja was a great educationist, and his endeavours to promote literacy in the state were inclusive of women’s education. Primary and secondary education were free. Besides making primary education compulsory in 1930, a special department for female education under a deputy director was set up.

Free conveyance was provided and staff would escort girls from home to school. Under the Maharaja, a special drive against illiteracy achieved a lot of success with around 4,000 adult literacy centres functioning in the state.

During his reign the number of primary schools went up from 706 to 20,728 in Jammu and Kashmir. Steps like free education till matriculation, scholarships and grants for backward classes, nominal fees in colleges, and Urdu being added as a medium of instruction were in keeping with his vision of promoting literacy and higher education across a wide section of the people.

The Maharaja paid special attention to tourism and handicrafts industry. Gulmarg and Pahalgam were developed in a planned manner and the number of tourists increased from 8,604 in 1931-32 to 24,659 in 1936-37. Local enterprises were greatly encouraged and many manufacturing units were set up.

The infrastructure development that he initiated by building roads, bridges, tunnels, hydro power stations in addition to modern communication services like telephone, telegraph and wireless, lead to significant rise in industrial production.

In fact, increase in the volume of trade, though a boon for all, was especially beneficial for the Kashmiri Muslims who were primarily craftsmen and tradesmen. Brilliant agriculture reforms which changed the taxation system, land ownership and debt clauses, the abolition of begar and forced labour, all brought much relief to the agriculturists.

Maharaja Hari Singh was a king of many “firsts”, setting up a flood control department, price control department during the Second World War and the revolutionary Jammu and Kashmir Bank in 1938, all of which improved the quality of life of the people.

In a memorable speech in London in 1931-32 at the Round Table Conference on Indian constitutional reforms, the Maharaja fearlessly demanded honour and equality for India. This stance earned him the wrath of the British who unleashed a conspiracy against him which finally ended with him being the first high profile exile who died in Mumbai, far away from his beloved Jammu and Kashmir.

Learning by inquiry into the past, with an ability to sift through counter narratives objectively gives us the skills to deal with our present better. Though most historians have wronged Maharaja Hari Singh, more have now arisen to counter it, not in an attempt to seek a consensus, but because they believe that there are two sides to every story.

One has been told and the other needs to be told. Maharaja Hari Singh’s legacy as a ruler of a vast and diverse kingdom who loved his land and all his people is something we need to know and learn from. 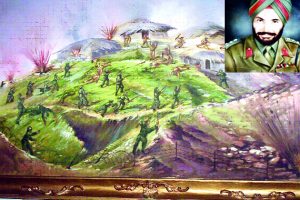 Poonch Link Up Day: the back story