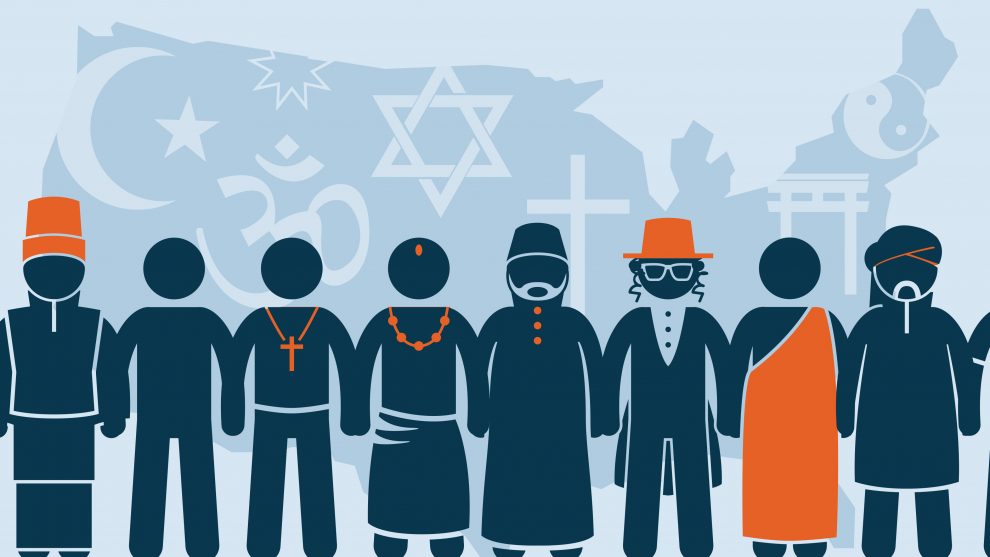 For the past few years, it is very common to hear from India’s Left-Liberals and the western media that “the place of pluralism is shrinking in India with the country moving towards majoritarianism”. This view is directly related to Narendra Modi-led BJP coming to power in 2014, and its re-election in 2019, with a thumping majority on its own. But the recent Pew Research Center Survey titled ‘Religion in India: Tolerance and Segregation’ gives a contrasting picture. The survey points out that Indians cutting across religions (91% Hindus, 89% Muslims and Christians, 82% Sikhs, 93% Buddhists and 85% Jains) strongly agree that they are very free to practice their religion.

The survey has been conducted between late 2019 and early 2020 based on 30,000 face-to-face interviews of Indians. Obviously, in a country like India with over 136 crore population, a survey of only 30,000 people is no doubt a smaller number. All surveys have limitations, and this survey is no different either. However, this is the only credible major survey available on India’s religious attitudes available so far. And importantly, Pew’s surveys on religions and religious attitudes have worldwide credibility.

Although the Survey strongly states that there is religious freedom for every religion, it also highlights the bitter fact that India is a segregated society. While 84% of Indians agree that respecting every religion is very important to be a true Indian, many of them are against inter-religious marriage. On the one hand, a majority of Hindus, Muslims, Sikhs and Jains are against inter-religious marriage and on the other opposition is less among Christians and Buddhists. The umpteen number of cases honour killings which hit headlines can perhaps thus be understood in a section of India’s society.

The per the survey majority of all religions believe respecting other religions is a very important part of their religious identity, although there remain drawn boundaries among these communities. The existence of religious division in Indian society is something not new, as it’s an open secret that many Indian communities prefer to live in areas where their own communities are either in the majority or dominant.

That centuries-old wounds still exist among the religious communities, particularly between Hindus and Muslims, is a bitter fact and is still reflected in the Indian society, though this divide is quite less in the South. This divide is reflected in the survey with a larger share of Hindus and Muslims saying that all their close friends share their own religion. Significantly, 79% of Muslims saying that respecting other religions is a very important part of their religious identity points to a different picture of Indian Muslims contrasting to the harsh views expressed by the hardline Hindu right-wing about the community.

Often many left-leaning intellectuals try to identify India in the prism of the western style of secularism, which means the separation of the church and the State. This view of these  intellectuals is highly rejected by Indians is evident from the fact that even voters of strictly atheist parties like CPM, CPI and DMK are mostly believers of God as pointed out by the survey.

Even before this survey, there have been strong arguments that the Left’s rigid atheist views have few takers in the country. That’s the reason that West Bengal and Tripura, the two erstwhile Marxist citadels that witnessed continuous long rules of the Left, never abandoned the Hindu rituals and festivals even at the peak of Left politics. Not only this, in Kerala, the only remaining Left bastion, recall was electorally punished in 2019 Lok Sabha polls by a sizeable section of Hindus, who were angry with the State government’s stance on the Sabarimala temple. Also, this data is in contrast to the fear-mongering done by a section of the Hindu right-wing that “Hindus are a minority in Kerala” as they wrongly assume that Hindus voting for communist parties mostly “abandon” their faith.

Interestingly, the survey also points out that Hinduism has a large effect on Indian society with 27% Muslims and 20% Christians too believing that Hindu identity is very important to be a true Indian. On the other hand, Karma, one of the core beliefs of Indic faiths like Hinduism, Buddhism and Jainism, is believed not only by Hindus (77%), Buddhists (64%) and Jains (75%), it is also shared by 77% Muslims and 54% Christians. The purification power of the river Ganga, a very important belief in Hinduism, is not only believed by 81% Hindus but is also shared by 32% Christians and 26% Muslims.

The conclusion that is drawn as per the Pew Survey is that the Indian society largely believes in the principle of pluralism despite the existence of religious division.