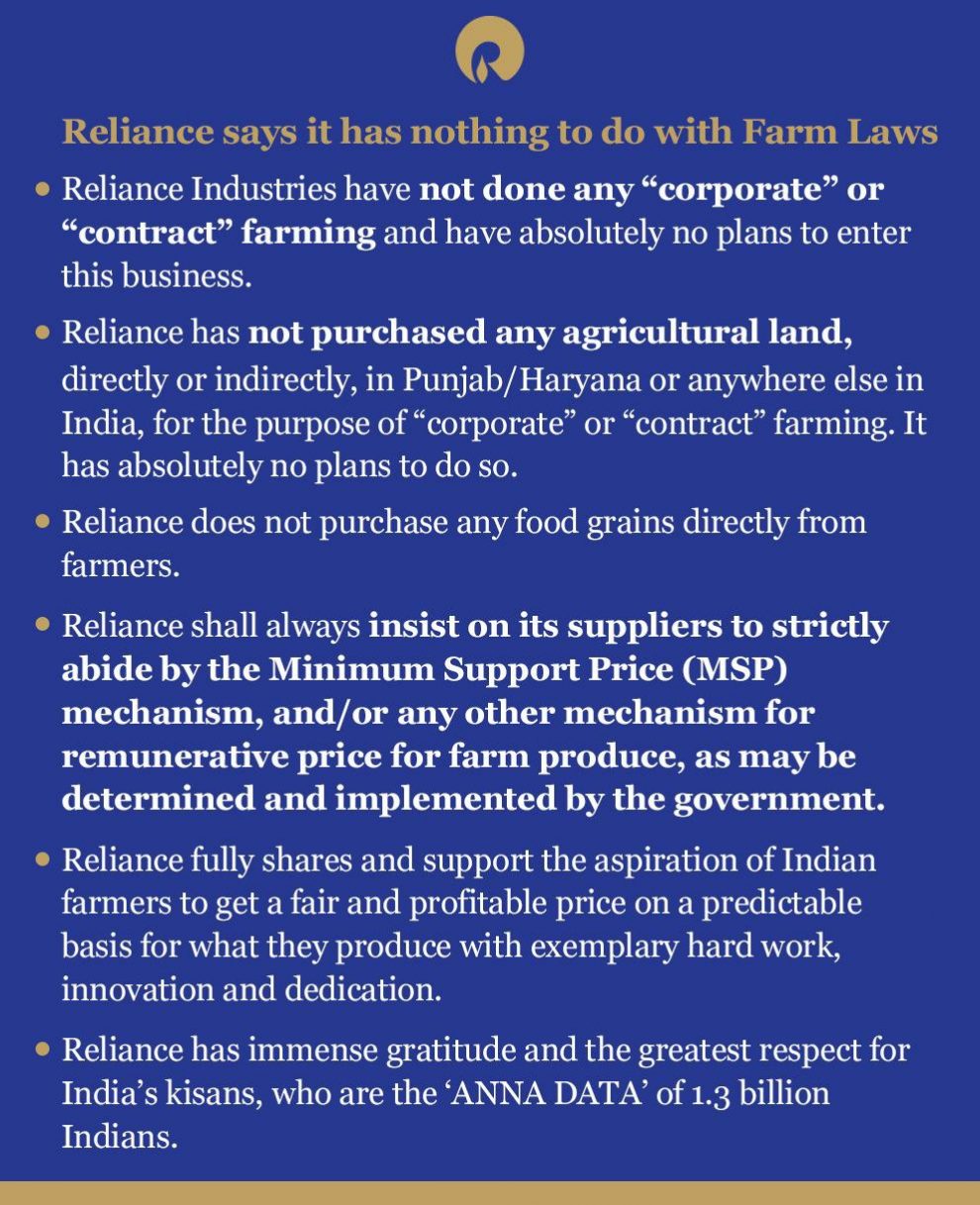 Reliance Industries Limited (RIL), through its subsidiary Reliance Jio Infocomm Limited (RJIL), in a petition mentioned to be filed in the Honourable Punjab and Haryana High Court today, has sought the urgent intervention of Government authorities to bring a complete stop to the illegal acts of vandalism by miscreants. These acts of violence have endangered the lives of thousands of its employees and caused damage and disruption to the vital communications infrastructure, sales and service outlets run by its subsidiaries in the two states.

The miscreants indulging in vandalism have been instigated and aided by vested interests and our business rivals. Taking advantage of the ongoing farmers’ agitation near the national capital, these vested interests have launched an incessant, malicious and motivated vilification campaign against Reliance, which has absolutely no basis in truth.

The falsehood of the campaign becomes crystal clear from the following irrefutable facts, which we have placed before the Honourable High Court. These facts establish that Reliance has nothing whatsoever to do with the three farm laws currently debated in the country, and in no way benefits from them. As such, the sole nefarious purpose of linking the name of Reliance to these laws is to harm our businesses and damage our reputation.

1.     Reliance Retail Limited (RRL), Reliance Jio Infocomm Limited (RJIL), or any other affiliate of our parent company, i.e., Reliance Industries Limited have not done any “corporate” or “contract” farming in the past, and have absolutely no plans to enter this business.

2.     Neither Reliance nor any of our subsidiaries has purchased any agricultural land, directly or indirectly, in Punjab/Haryana or anywhere else in India, for the purpose of “corporate” or “contract” farming. We have absolutely no plans to do so.

3.     Reliance Retail is an unmatched leader in organised retail business in India. It retails products of all categories including food grains and staples, fruits and vegetables, items of daily use, apparels, medicines, electronic products of various brands belonging to independent manufacturers and suppliers in the country. It does not purchase any food grains directly from farmers. It has never entered into long-term procurement contracts to gain unfair advantage over farmers or sought that its suppliers buy from farmers at less than remunerative prices, nor will it ever do so.

4.     We at Reliance have immense gratitude and the greatest respect for India’s kisans, who are the ‘ANNA DATA’ of 1.3 billion Indians. Reliance and its affiliates are committed to doing everything to enrich and empower them. As customers of their services, we believe in building a strong and equal partnership with Indian farmers on the basis of shared prosperity, inclusive development and an equitable New India.

5.     Therefore, Reliance and its affiliates fully share and support the aspiration of Indian farmers to get a fair and profitable price on a predictable basis for what they produce with exemplary hard work, innovation and dedication. Reliance seeks significant augmentation of their incomes on a sustainable basis, and pledges to work towards this goal. Indeed, we shall insist on our suppliers to strictly abide by the Minimum Support Price (MSP) mechanism, and/or any other mechanism for remunerative price for farm produce, as may be determined and implemented by the government.

Far from hurting the interests of Indian farmers, the businesses of Reliance have actually benefited them and the Indian public at large, as is obvious from the following facts.

Reliance Retail has built India’s largest organized retail business by investing in economies of scale and creating world-class technology-enabled supply chains, which has brought significant gains to both Indian farmers and consumers.

Jio’s fully 4G network has provided world-class data connectivity to every single village in India at the most affordable rates anywhere in the world, thus bringing the benefits of the Digital Revolution to crores of Indian farmers. In just four short years, Jio has become India’s largest digital service provider, with 40 crore loyal customers. As of 31st October 2020, Jio has more than 140 lakh subscribers in Punjab (approximately 36% subscribers in the state) and 94 lakh in Haryana (approximately 34 % subscribers in the state). Unlike the vested interests, Jio has not resorted to any coercive or unlawful measures to win over customers.

During the ongoing COVID-19 pandemic, Jio’s network has become a lifeline for millions of farmers and others in rural and urban India. It has helped kisans, traders and consumers to participate in digital commerce. It has enabled professionals to work from home, and students to learn from home. It has aided teachers, doctors, patients, courts, various government and private offices, industries and charitable establishments. It has served people working to provide emergency, critical and life-saving services.

Reliance wishes to sincerely thank the authorities, especially the police, of Punjab and Haryana, for their action against miscreants so far. This has reduced the incidents of vandalism in recent days. However, our company, through its Petition in the Honourable High Court, has sought punitive and deterrent action against miscreants and vested interests, so that Reliance can run all its businesses smoothly in Punjab and Haryana once again.

We urge the public and the media to be aware of the correct facts and not be misguided by false information and narratives peddled by vested interests for their own gain and benefit.