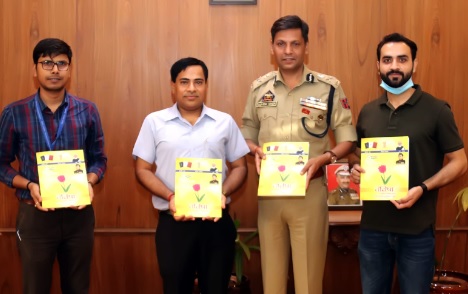 JAMMU: Regional Passport Office (RPO), Jammu on Friday released the second edition of the annual Hindi magazine “Tavisha”. The magazine was unveiled by Mukesh Singh, IPS ADGP Jammu Zone in his office.
While informing, Regional Passport Officer N.K Shil told that officials of this office really toiled hard and made valuable contributions in compiling and accomplishing the current edition of the Hindi magazine themselves.
Cardinal objective is to promote the use of Hindi in official and private work. In addition to it, the display of literary creative work of staff and their family, the focus is also on brief readers regarding basic passport application procedures. He copiously praised the efforts and cumbersome exercise undertaken by co-ordinators viz Mamta, Ginzasang and Diwakar for the successful compilation and accomplishment of the publishing job.
Also lauding the employees for their creative work, valuable contributions and active participation with a great degree of zeal and enthusiasm, Regional Passport Officer (RPO) Shil said that he would keep his effort to continue this special supplement in the future in order to enrich staff aesthetic value. He also expressed hope that such publication of Hindi magazine and collective participation by the staff will help encourage and promote the usage of Hindi as a language in daily professional and personal lives. Such annual publication will also provide the opportunity to the staff and their family to showcase their creative talent and skills apart from the progression of Hindi in corona crisis time.
While releasing the magazine, Mukesh Singh, IPS ADGP Jammu Zone acclaimed the efforts of passport officials for their artistic work and valuable passport making messages depicted in the magazine. The brief inauguration event ended with thanks to ADGP NZ Jammu by RPO Jammu who also congratulated every stakeholder for its successful publication. Among the others, staff of PO Jammu and IGP Jammu were present on the inaugural ceremony.

Reservation in Legislature matter of justice, honour and dignity for Gujjars
28 Tehsildars transferred in Jammu
Comment