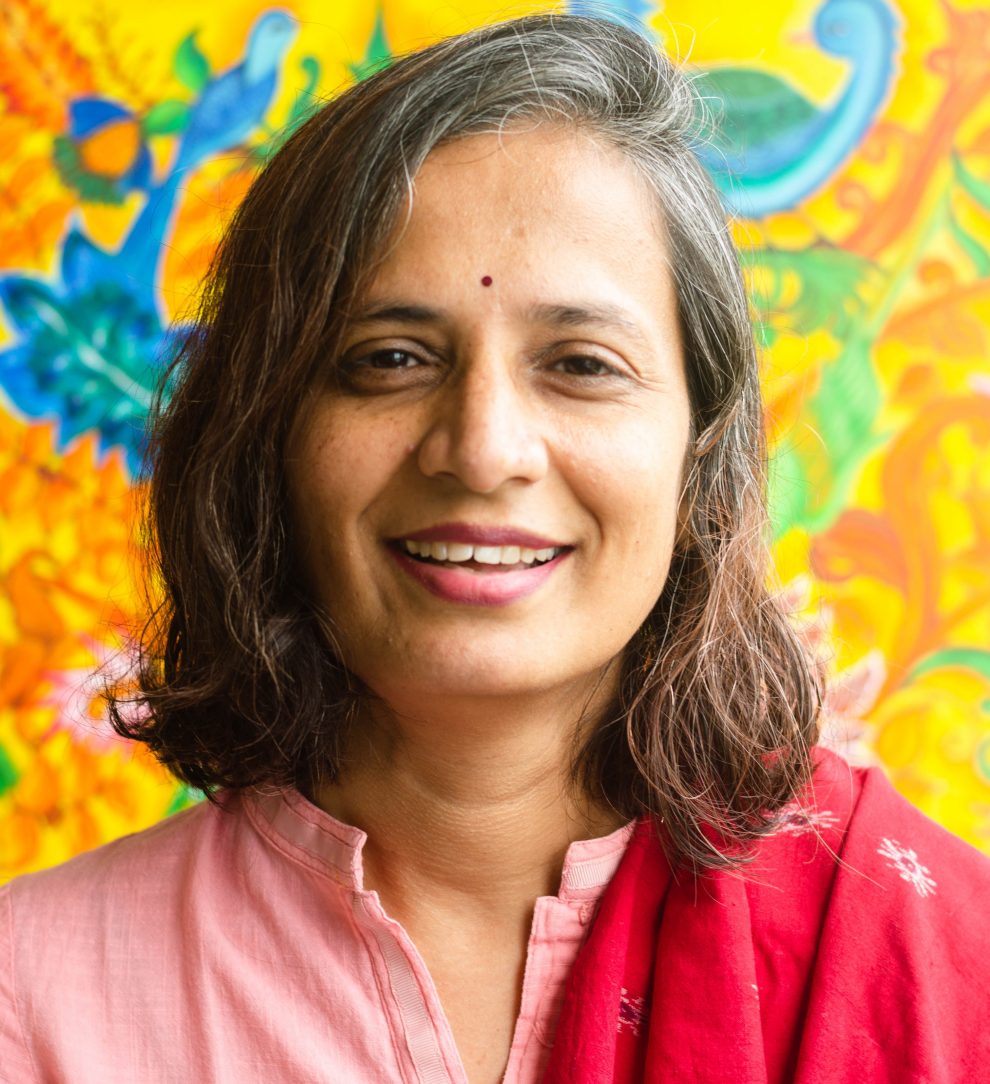 There are parts of Pari’s house that I like. Mostly because I remember my way around them. The  kitchen is large, wide open, with an island, which is where I like to sit. The front yard is pretty also, even if the plants have withered. I assume Siva used to take care of them. Pari tries very hard to remember to water them, to care for them, but I’ve learned the hard way that plants are not like kids; it’s not enough if you simply feed them.

Everyone assumes that people from the village know all about gardens and plants, but the truth is we only know about the crops that we grow. If that. When I came to Madras after the wedding, people used to ask me about their gardens.

‘How often I should water a rose plant?’ kind of questions. I had no idea. The first time I saw a rose plant was in the city anyway. Funnily, I’d never thought of our Nandhimangalam house as a house, the way I think of Pari’s, or even our Bella Vista apartment. When I came to Srini’s house after the wedding, I saw the rooms as rooms. It was really the first time I thought of a building as  a home. Nandhimangalam, like Amma’s breasts, simply nurtured me, and I have no memory of how it looked.

One summer, we went on a temple trip, the one parents usually take when they realize their children are not  like them; diagnosing a lack of culture and values, they embark on these trips, as if culture lay in temples and grandiose structures, and not in themselves. That summer, we mixed Gangaikonda Cholapuram with Chidambaram, eager to showcase the endurance of our culture, both architectural and religious. In the car, Srini and Sekar took turns telling the bored children the wonders of the temples and their uniqueness (‘Do you know the Chidambaram Deekshitars were appointed by Sivaperuman to take care of his worship?’).  I said I wanted to visit my village and the brothers agreed. Renuka was fiddling in the bag to feed the children something.

The road that led from the main road to our village looked different. It had been so many years, too many to keep count. We entered the dusty road and then the village, even as bored middle-aged men stood around, peering into the car at the seemingly lost people.

I rolled down the windows to smell the village, to remember, and immediately, complaints ensued. Dirt. Heat. Smell. Everything I was, was a problem to the children. Somehow we located our old house, or what stood in place of it: a garish orange and green imposter. I walked up and down, over to where Ammini’s house once (and amazingly, still) was. Just as it had stood all those years ago, it waited for the girl of the house to return, only it was hollowed out, like an autopsied cadaver. The family, I knew, had left for Delhi, to be with her brother who had joined the army. I went closer, pushing my way through the underbrush typical of a dilapidated house. Creepers had claimed the walls, and plants and trees peeked out of windows and doors. Unmindful of the scratches and the stares I walked on through the front door, half expecting to see Ammini sitting by her favourite wall, waiting for me.

Instead, I saw more signs of decay – the bricks were visible in most places and the moss nearly tripped me up. ‘Ammini,’ I cried out several times, only stopping when I heard a sound behind me. I turned – had she heard me? Had she been waiting? Why did I take so long to return? – and saw Srini (or maybe it was Sekar). I fell to my knees, sobbing. I vowed never to visit the village again. She wasn’t here, but meet her I would, of this I was sure.

Excerpted with permission from The Eminently Forgettable Life of Mrs Pankajam, Meera Rajagopalan, Hachette India. Read more about the book here and buy it here.

Join The Dispatch Whatsapp Group to stay updated
The Dispatch is present across a number of social media platforms. Subscribe to our YouTube channel for exciting videos; join us on Facebook, Intagram and Twitter for quick updates and discussions. We are also available on the Telegram. Follow us on Pinterest for thousands of pictures and graphics. We care to respond to text messages on WhatsApp at 8082480136 [No calls accepted]. To contribute an article or pitch a story idea, write to us at [email protected] |Click to know more about The Dispatch, our standards and policies
TagsFiction Hachette India Meera Rajagopalan The Eminently Forgettable Life of Mrs Pankajam

Respective parties to take decision on meeting Delimitation Commission as per their will: PAGD
Hold assembly elections after restoration of Statehood: PAGD
Comment