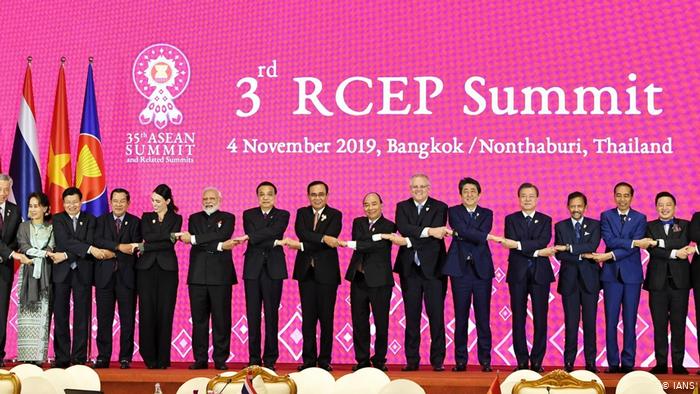 The conclusion of the Regional Comprehensive Economic Partnership Agreement (RCEP) between China, Japan, South Korea, Australia, and New Zealand, and 10 Southeast Asian countries is an important development in the Indo-Pacific’s economic architecture. After almost eight years of negotiations, the deal—which creates the world’s biggest trading bloc—is finally done. Incidentally, India was part of the negotiations from the very beginning, but opted out in November 2019. It did so to protect itself from possible dumping of Chinese products in the Indian market. Beyond this, further details and reasons have not been shared.

India was likely expecting the RCEP talks to extend indefinitely after its withdrawal from the negotiations. New Delhi could have been overconfident in its belief that a regional free trade deal would ultimately collapse if a 1.3 billion rising economy such as India refused to join. India did have the example of the Chinese Belt and Road Initiative (BRI) to go on. New Delhi’s non-participation caused significant damage to China’s intention of redrawing the regional economic map. India was also convinced that following its withdrawal, countries such as Japan, Australia, South Korea, and Vietnam might be dissuaded from going with China, fearing its dominance in the RCEP. Overall, the RCEP’s actualisation is thus an important setback to Indian foreign policy in recent years.

India expected most of the ASEAN countries to review their highly China-dependent supply chains in the aftermath of reports emerging about China’s role in the origin and spread of the COVID-19 pandemic, and several Chinese attempts to change the regional status quo. In fact, given the widening gap for example between Australia and China over the past few months, India’s expectations appeared on point. New Delhi tried to utilise this opportunity to strengthen its strategic linkages with the Quad, and other ASEAN countries.

The RCEP’s finalisation thus seems to have India off-guard. A plethora of arguments could be made to suggest a lack of significant implications for India. We could be reminded that India in any case has free trade agreements (FTAs) with 12 out of the 15 RCEP countries, bilaterally or collectively. The possibility of India joining the RCEP at a later stage, after sufficiently strengthening its domestic market, could be offered. Some could even argue the possibility of India becoming an observer in the RCEP—such a proposal has already been mooted by Japan. India attempting to compensate for this exclusion by signing another free trade deal with other blocs is one more potential suggestion.

It is however important to admit a missed opportunity. The rule of thumb for any multilateral trade negotiation is that rather than opting out, it is better to stay the course of negotiations and later attempt modification from within. By leaving the table, the door to influence the process generally closes for the departee. India thus made a miscalculation.

Further, even if—in fact especially if—India decided leave the negotiations, it became critically important to reach out to friendly countries in the region and convince them of India’s concerns. India should have tried to at least persuade said friends to move more slowly in concluding the RCEP. New Delhi was unable to do so successfully. It got tied down with the border standoff with China—perhaps a clever ploy by Beijing to distract New Delhi from developments leading up to the RCEP. India was so occupied that it did not seemingly take enough notice of the unprecedented cooperation Japan and South Korea have undertaken with China in addressing the pandemic, as well as in bringing their economies back on the track.

The RCEP as it looks now is a setback for India. It has exposed the limitations of India’s influence among even like-minded countries in the region. It has helped China position itself as a votary of free trade in the region, and India as insufficiently prepared—or even a hurdle in the way. India may deny most of these concerns, although they are obvious to countries in the region. Apart from the geopolitical issues, India is also likely to now face structural obstacles in its trade with the region.

India may cite its trade deficit with FTA partner countries, which reached almost US$ 105 billion in 2018, as needing to be taken stock of. However, it is equally important to realise that most Southeast Asian countries, and South Korea and Japan, are dissatisfied with what they see as Indian oversensitivity about the trade deficit. They argue that bilateral economic exchanges are multi-layered and with innumerable auxiliaries, of which India must not take such a narrow view.

It is time for Indian policymakers to adopt a more nuanced and far-sighted approach to the region’s economic and security architecture, and carefully chart New Delhi’s path and place in it. A sense of overconfidence or self-doubt will not be good for India or for the region, which is the RCEP’s most important lesson.

The author is Associate Professor with the Centre for East Asian Studies, SIS, JNU, and Visiting Fellow, IPCS.