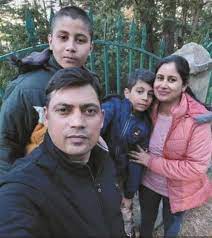 RAMBAN: Body of wife of a Sub Inspector of Railway Police Force was found, five days after she along with her husband and their two children died after a car they were travelling in skidded off the road and plunged into river Chenab along the Jammu-Srinagar highway in Ramban district.

There was no trace of the Sub Inspector of RPF, Rakesh Kumar, and the two children as yet. Official sources told that the body of woman, Asha Rani, was recovered at Reasi.

On July 26, Kumar lost control over the vehicle he was driving with his wife and their two children on board and the car skidded off the road, plunging into the fast-flowing river at Mehar, a place between Ramban -Banihal. Soon after the accidents team of Police and QRT reached the spot and started searches. However, success eluded them. While body of the woman has been found, searches for the railway cop and the children continue. (GNS)