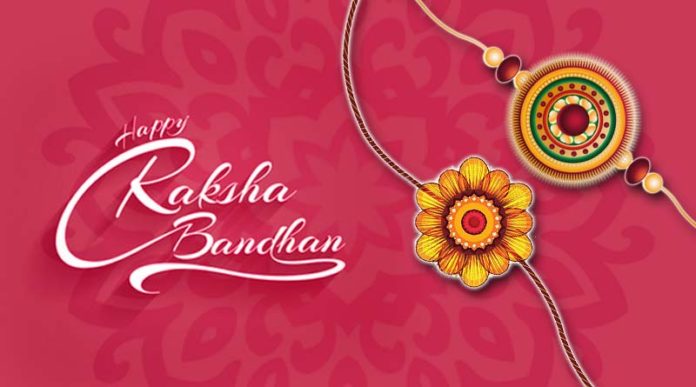 Raksha Bandhan, the festival of special bond between brothers and sisters, is being celebrated today across the country. On this occasion, sisters tie colorful rakhi around the wrist of their brothers and pray for their prosperity, health and well-being. In return, brothers pledge to protect and support their sisters and present them gifts.

Rakhis made by Indian companies and Self Help Groups have completely replaced Chineses products this year. Shopkeepers and people have totally rejected Chinese Rakhis this year following Prime Minister Narendra Modi’s call for Atmanirbhar Bharat and Vocal for Local.

President Ram Nath Kovind and Vice President M. Venkaiah Naidu have greeted the people on the occasion of Raksha Bandhan. In his message, Mr Kovind said, Rakhi is the sacred thread of love, affection and trust that sisters tie on the wrists of their brothers.

He said, this is a unique festival that strengthens the will to protect the interests of women and work for their well-being. He asked everyone to take a pledge to stand for the honour and dignity of women so that they can contribute their best for the nation and society.

He added that on this auspicious occasion, let us also resolve to uphold the dignity and respect traditionally accorded to women in the society and empower them to reach their true potential. Mr Naidu expressed hope that this festival will bring peace, harmony and prosperity in the country.

In a massive show of love, solidarity, brotherhood and national bonding, sisters from North-East tied Rakhi on Jawans from armed forces and paramilitary personnel deployed in Jammu and Kashmir and Ladakh.

On the auspicious occasion of Raksha Bandhan, Self-help groups from the eight North-Eastern states also sent Rakhis, tri-coloured bands and facemasks to Jawans posted in Jammu and Kashmir and Ladakh – bringing together the eternal emotional bond between the various cultures, States and people of the country.

In Madhya Pradesh, a special type of rakhi has been prepared  following the Prime Minister’s Vocal for Local appeal. Eco-friendly rakhis have been made from cow dung along with silk, paper and seeds of the plants.

Chhattisgarh Governor Anusuiya Uike has sent Rakhis made by tribal and rural women of the state to the President, Vice President and Prime Minister.