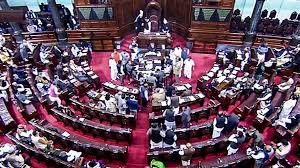 Rajya Sabha today resumed the discussion on Motion of Thanks on the President’s Address to the Joint Sitting of both the Houses of the Parliament. Participating in the discussion BJP MP Jyotiraditya Scindia lauded the Centre’s efforts in tackling the COVID pandemic in the country. He said, under the able leadership of Prime Minister Narendra Modi, the nation has risen like a Phoenix from the ashes of the pandemic.

Highlighting multiple reforms introduced by the NDA Government at the Centre, Mr. Scindia said, the three new farm laws will be able to usher in revolutionary changes in the Agriculture sector ensuring profitable returns for the farmers in the country. He alleged opposition parties of indulging in double speak over the issue of the farm laws. Mr. Scindia said, Congress, which is opposing the farm laws today, had explicitly mentioned in their Election Manifesto of 2019 that the APMC Act in the country would be repealed. He added that their manifesto also said that inter-state trade would be free from all restrictions in the country. Mr. Scindia said, the then Agriculture Minister Sharad Pawar wrote letters to the States in 2010  stressing on the need to increase participation of private players in the Agriculture sector.

Nominated MP Swapan Dasgupta stressed that how the new farm laws aim at bridging the great divide between farmers in different parts of the country. Participating in the discussion RJD MP Manoj Jha demanded roll back of the farm laws. He asked the government to hold further discussions on the issue with the agitating farmers and find an amicable and acceptable resolution.

Congress MP Digvijaya Singh raised the issue of implication of farmers, labourers, civil right activists and journalists on sedition charges. He asserted that dissent is the essence of democracy and added that the government brought in farm laws and labour codes without consultation with the stakeholders.The discussion is underway.